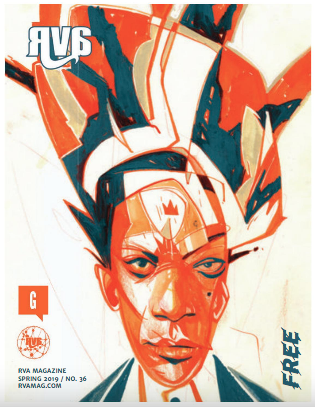 RVA #36 is our Spring 2019 issue, bringing you the first-rate coverage of central Virginia’s street-level culture that you have come to expect over RVA Mag’s 14 years of existence.

Richmond’s artistic community is drawing a lot of attention this year, and in this issue, we dug into the stories behind the art. From longtime local fave Chris Visions, who has caught the world’s eye with his work on Marvel’s Spider-Verse, to gothic princess Abigail Larson, who is currently involved in the creation of Neil Gaiman’s latest Sandman project, we’ve got some serious heavy hitters to introduce you to in this issue.

Richmonders getting out and exploring the world is also a big theme this issue. From local hip-hop sensation Michael Millions’s improbable experience performing in small-town Kentucky to our own Madelyne Ashworth’s travels around Europe and Asia, we bring the unique perspective of our home city to events all around the world.

There’s a lot more in store as well, from a GayRVA report on the queer resistance movement in rural Appalachia to an exploration of independent filmmaking in the river city with the creators of upcoming feature Last Call, which was filmed on location at Richmond’s own The Answer.