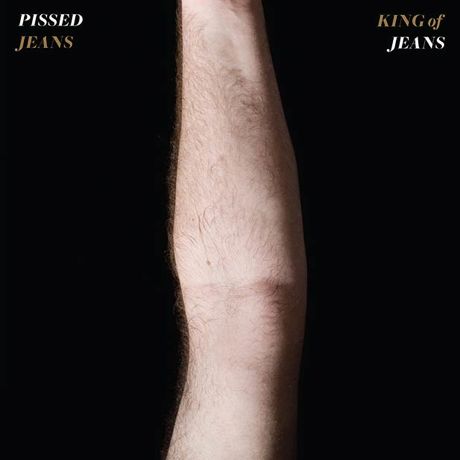 Thank God that there are still bands out there who still possess the art of making captivating and intelligent rock records. King of Jeans is ugly, clever, inventive, and dumb in all the right ways.

The band clearly has its roots in hardcore, although their closest contemporaries to my ears would be a deft blend of McLusky and The Jesus Lizard. Singer Matt Korvette is obviously a disciple of David Yow, but he manages to duck imitation though sheer charisma. Songs like “Half Idiot” walk the line of pure aggression and atmosphere without sounding contrived over thought. King of Jeans never gets boring or redundant, which is saying a lot considering how easy it is for bands such as this to go on autopilot after finding a groove.

Pissed Jeans are an incredibly fun band that are thriving in a time in which it seems like more and more bands are trying to appear serious, measured, and critically appealing. Here’s hoping that they never come out of their drunken rampage.

Can someone tell me why I missed Cult Ritual whenever it is that they came to Richmond? I’d never heard them before giving this LP a listen and it’s been pleasure. A fucking pleasure. Not swearing in the first two sentences of this review really doesn’t do this record justice. There is more anger packed into this 31 and a half minutes of hardcore and noise than you could find in all of New England after the Super Bowl two years ago.

Normally I have a hard time getting into noisier hardcore, but Cult Ritual reeled me in immediately. The record transitions from noise to blisteringly fast, aggressive hardcore, back to noise, back to hardcore, and just when you think you can’t take it anymore it drops down to a three and a half minute repeating drumbeat. This is ripped away by the sound of a man coughing as the music comes blasting back. Great record.

Monotonix
Where Were You When It Happened?
Drag City

Monotonix are cursed with being a fantastic live spectacle. My first experience with them included vocalist Ami Shaley stalking the room in his underwear while the rest of the trio dismantled and reassembled their instruments on the floor of the Black Cat. This kind of spectacle always becomes baggage when later confronted with the carefully recorded counterpart.

Where Were You When It Happened? is more than a success if you’re looking for a clarified version of what Monotonix have perfected live. Songs like “I Just Can’t Take it Anymore” swagger with a heavy amount of Blooze influence and Sabbath-ey crunch. They’re definitely working within a well-worn niche, but they’re captivating enough to keep the listener from playing spot-the-riff. The band have stepped up to the task of creating an album that’s more than just a loss leader for their live show, which is far more than I can say for other bands of this ilk.

IAME
I Am My Enemy
Heaven Noise Recordings

Oregon native IAME(I-am-me) has no problem confronting and questioning his role in society and constantly challenging it. On his sophomore album I Am My Enemy he gets personal. Confronting the generalities in Hip Hop that too many people think make you “real” such as bling, Escalades and proper gear, IAME examines his place with in the music industry and his community. This becomes apparent on such tracks as “Unlikely Candidate”. Speaking about Portland, where he lives, “Home to fake gangsters/and real hoodlums/who look at me like I ain’t shit cause I ain’t got no jewels or rings/but skip the superficial shit/just let the music spin/this user friendly way I speak truth has got them tuning in”. More then just a treatise on the superficialities of Hip Hop, the song speaks about Portland’s history citing a situation not unlike the Katrina disaster in New Orleans which happened in 1943 at Van Port City, Oregon.

I Am My Enemy will keep your body moving and your head bangin’. You’ll gain a little knowledge with each nod.

I can in no way claim to be a scholar in the realm of ambient doom records, but I know what I like and Velvet Cacoon have emerged with a record that is simultaneously devastating and comforting.

There is very little information known about the group, which hails from Portland, and any facts that I’ve been able to dig up about the band seem specious at best. Even so, pieces like “Dreaming in a Hemlock Patch” (clocking in at a staggering running time of 36:44) pulse with throbbing drones that sound like a thick black smoke emerging from gaping cracks in a post-apocalyptic Earth. There’s not too much texture outside of the low-end, and the rhythms that do appear are more phantoms than something that would provide any sense of propulsion to the music. Even so, the drones contained on these two discs are often uncanny in their intensity and this album is worth searching out for any fans of intense drone music.