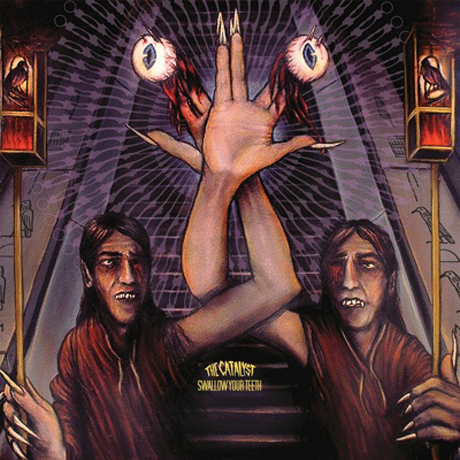 The Catalyst
Swallow Your Teeth
The Perpetual Motion Machine

If The Catalyst continues on with this momentous streak, you can expect to hear about the mark they have left on Richmond for years to come. With releases prior, the band sifted through moments of strength and discovery. It is with undoubted excitement to hear the unveiling of their new full length Swallow Your Teeth.

With titles that exude a tongue-in-cheek mentality and a heavy succinct sound, Swallow Your Teeth is a realized effort by a band that always radiated an exhilarating promise. “Werewolves of Washington” runs a lengthy seven minutes, but the song never fails to deliver. It explores the extreme facets of their songwriting combined with the level of intensity built around their instrumental tracks. A strong front-runner for best song title by a Richmond band may easily be “Lars Ulrich’s 1986 Funeral (It Should Have Been You).”

While at first, the mix of the vocals and music on the record felt jarring. Further listens allow the intention of the band to become clearer. The Catalyst strives to create a unique wall of sound. Sonically, they achieve this by making their heaviest record to date.

If it makes any sense, this record reminds of me of the record nerd within us all. After one listen, I just wanted to sit in front of my sound system with the lyric sheet. Examining each word and the way the phrase resonated with the sound dictation. This is a band that takes the spirit of this city and can turn it on it’s head as easily as their songs are becoming the anthems for a new set of music listeners.

Vivian Girls
Everything Goes Wrong
In the Red

The ever-polarizing Vivian Girls return with an album that comes bearing the same sort of saccharine fuzz candy that filled their debut. Of course, we’re treated to some twists on the formula which include drone-y takes on 60’s girl group pop (“Tension”) and songs that perpetuate the myth that slowing shit down makes you sound mature (“Before I Start to Cry”).

I can’t help but feel like a dick ranting about a band that didn’t ask for this premature canonization/backlash, as this is really the second album by a group of girls with a penchant for bubblegum pop, Black Tambourine, and Phil Spector. They’ve released some undeniably catchy songs, and, truth be told, they have some pretty mesmerizing moments in their music. Even so, Vivian Girls are ultimately a casualty of the internet hype cycle/feedback loop that’s closing in on artist after artist these days. In earlier times, it would have been easy to label the girls as a “singles band”, but these days I’ll settle for cherry picking tracks such as “When I’m Gone” off the record and letting the rest of the album take its place with the other forgettable ephemera in Hard Drive Hell.

It’s always San Francisco, isn’t it? It’s like there’s so much residual drug residue in the air left over from those gloriously hedonistic, insanely experimental days of the 60s that it’s easy to see why certain bands have more than a slight air of the hallucinogenic to them. Case in point: Wooden Shjips. Created as a sonic experiment by ringleader Ripley Johnson and comprised of mostly non-musicians (Johnson did the unthinkable and collected co-conspirators that hadn’t ever been all that musically-experienced), Wooden Shjips has grown over the years into a sonic force to be reckoned with.

After the release of the crazy, far-out, brain-busting explosion that was Vol. I, the Shjips firmly ensconced their psychedelic haze into my affection, and the emergence of Dos was a welcome event. It is but five songs long, but full of telltale Shjips conceits. “For So Long” features that bubbly, bouncy bass line typical of Wooden Shjips, and plenty of Johnson’s long and winding howling guitar riffs, backed by the hypnotic beat of the drums, driving things forward over the edge of the great unknown. The expansive “Down By the Sea” starts off sounding much like Vol. I’s “Shrinking Moon for You”, just minus some of the feedback and many minutes longer. There’s even a robust song entitled “Aquarian Time”, as if the Shjips are attempting to create their own Age of Aquarius.

The music made by these fervent experimentalists isn’t as immediately accessible as some of the other modern psych bands, like The Black Angels or Black Mountain. Their trance-like songs might take a while to win you over, but eventually, they will. It’s hard to say if this is the direction the Wooden Shjips chose, or whether the music chose them, but either way it’s a long, strange, wonderful trip.

Another day, another killer New Zealand band. For such a small country, they certainly produce an extraordinary number of great bands. Maybe it’s all that fresh air. Bang! Bang! Eche! is this year’s batch of heavily-punctuated shouters (check out Die! Die! Die! for another great example of arty, shout-ey-poppy punk), and they certainly know how to show you a good time. They take elements of The Rapture (the older, punkier stuff) and the sounds of their countrymen and emerge with a winning formula.

Their self-titled EP is but five songs long, but will in no way leave you feeling empty. “Rip it up/mess it up/fuck it up” encourages singer/whirlwind Zach in “Nikee,” and that’s the kind of attitude Bang! Bang! Eche! takes to the bank. One of the best, most energetic live bands you’re likely to see, this EP harnesses a good deal of that live experience in a studio setting. It’s full of bumping basslines, saucy synths, and the undeniable vocal/screaming that sets Bang! Bang! Eche! apart. Their EP does the job, reeling you in and leaving you counting the days until the LP comes along.

Sometimes I feel like an absolute idiot for sleeping on records. I had friends telling me to check out Kurt Vile for months and allowed him to get lost in the sea of names and records that get tossed around at any given social gathering. When I finally heard Constant Hitmaker, I was more than disappointed with my friends for not physically holding my ear to the speakers while cranking “Freeway”, the leadoff track to an album that takes 70’s style rock songwriting and turns it into a misty psychedelic haze.

Constant Hitmaker primarily consists of acoustic guitar, drum machines, ambient keyboards, and vocals with tons of reverb, but Vile managed to keep everything from turning into stylistic garbage by virtue of his songwriting, which, even in the more ambient bits of the album, shines brightly above his peers. The entire album feels like a druggy drive through a familiar countryside.

As of writing this, Vile has signed with Matador records and is set to release his third (!) album of 2009 in October. All I know is that after Constant Hitmaker, I’m going to be digging to find everything this man has released.