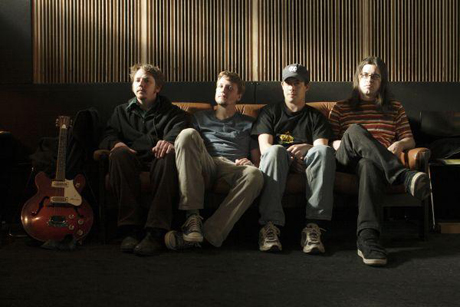 An Audience with The Kingsbury Manx

Something about the dreamy lull of North Carolinians The Kingsbury Manx has always appealed to me. Listening to them can sometimes feel as idyllic as lying on a soft blanket of lawn, watching to clouds shapeshift as the sun goes down and taking in some serious birdsongs.

Something about the dreamy lull of North Carolinians The Kingsbury Manx has always appealed to me. Listening to them can sometimes feel as idyllic as lying on a soft blanket of lawn, watching to clouds shapeshift as the sun goes down and taking in some serious birdsongs. Give the super splendidly fine Let You Down a few spins and youíll get my drift. The band went into hibernation for a little while, had some record label drama (sadly not so unusual a story these days), but happily, 2009 has seen a Manxian revival. The UNC basketball-loving band saw the release of their fifth studio album, Ascenseur Ouvert!, earlier this year, and did a few dates to promote said new record. Guitar-strummer and lyric-singer Mr. William Taylor (call him Bill) was kind enough to answer some questions. You can see the results below, and once you’re done, go throw on some KM, won’t you?

Megan Petty: You’ve just released album #5, which these days is no small feat. How does it feel to have put forth five albums worth of music?

Bill Taylor: It feels bizarre, honestly. I remember at the beginning having an inner dialogue and thinking how great it would be if we were around long enough to release 50 songs and we’ve sailed well past that. I think the make-up of our band is perfect for sticking around a while. A lot bands quit or implode because they didn’t “break out.” We’ve always wanted to just put out records we are proud of and hope they find the right people. Don’t get me wrong, we want to be heard by as many people as possible but we don’t make records to get famous.

Where did you record Ascenseur Ouvert!? Was the recording easy as pie, or slow as molasses? What are the best and worst parts of making a record?

The recording for this record was both easy and slow. Easy in the sense that we really had a clear vision for the songs going in and they were well rehearsed. We were also recording at Duck Kee where we have done a couple earlier records so it was comfortable. Slow in the sense that we were financing it ourselves so we recorded when we had the money to do so. We had no deadlines, so we could take our time and we did. We love the process of making a record but if there is one thing that sucks about it it’s listening to the songs a thousand times, not for enjoyment but scrutinizing every little sound and detail for the sake of getting it “right,” which is subjective anyway. After you’re done you have to get away from it so when you come back you can try to listen to it as a collection of songs, not a collection of decisions.

Which, if you had to pick, is your favorite KM record? And even more challenging, all-time favorite KM song?

The answers to these will most likely be different tomorrow but right now my favorite record is the new one. It’s the freshest and we put so much of ourselves into it… our time, our money, and lots of legwork in the release. As for the song, I’d go with “Fields”. There’s something about that song that I feel really captures what this band is about and I never get tired of the transition to the outro.

The new record is being released on Odessa. How different is it doing an album on your own? Thumbs up or thumbs down?

Paul (Odessa owner and operator) was starting up the record label thing on his own, independent of The Manx. He already had two other great records to put out so the label was in no way an excuse to put out Manx records. After considering things though, it really made sense and I think it was a great move for us. Paul’s a workhorse and really knows his stuff. Sure, it’s a little more work in every department when you do it yourself but it makes it even more satisfying when you get it out there.

I noticed, upon reading the handy FAQ on the KM site, that y’all dig on some band bios while on the road. What’s your all-time favorite bio, band or otherwise?

It’s hard to beat the David Lee Roth book… I’m blanking on the title but holy cow was it ridiculous. That guy’s life needed documenting. Heroes and Villains about the Beach Boys was also great for shedding some light on how dysfunctional they were. It makes you wonder how any of those bands during that time got any real work done.

What would be the title of choice for a KM bio?

The Fourteen Dreams of Dr. Shambolicus.

I’ve been reading a bunch of lovely things about y’all on the internet lately. What’s the nicest thing you’ve ever read about yourselves? And the not-so-nicest?

When our first record came out and no one knew who we were (we forgot to put our names in the record) people were positing theories that we were some sort of supergroup made up of Chapel Hill vets from other bands. That couldn’t have been further from the truth and it will never cease to be hilarious. It certainly was flattering though. My personal favorite negative review contained a story by the reviewer who kept falling asleep while trying to review one of our records. He was totally bored and ended the review with “Thanks, but no Manx.” Classic.

It has to be our last show with Calexico on our first European tour. It was in London at the Shepherd’s Bush Empire. We really had a great time touring with them and had become fast friends. During our last song they ambushed us with silly string and balloons. As a retaliation we somehow rounded up four luchador masks and ran out with them on during their encore. If I remember correctly one of the mariachis got Ryan in an airplane spin. Good times.

What band or artist most inspired you to embark on a career in music? Do you still find this particular band/artist inspiring? Who do you think is making really good music these days?

We are really big fans of a band called Home. We always felt like they were kindred spirits, sort of coming from the same direction as us. We ended up meeting them and we were right, they’re awesome guys. In fact, one of them just emailed us a remix mp3 of “Walk on Water” from the new record. The first time we recorded the song was at his house. As for who’s making really good music, at the risk of sounding like a shill for the label, Americans In France and Impossible Arms. Those records are really damn good.

Have you ever wanted to change the name of the band? If so, what was the
potential new name?

We have talked about it once or twice, even threw out ideas like just shortening it to The Manx just so we don’t always have to say the name twice when someone asks “The what?” Giving names to songs or albums has always been tough for us. I’ve really come full circle on the name. It’s weird, it’s descriptive, and it’s distinct. Works for me.

What words of wisdom would you offer to fledgling bands looking to sustain a career in music?

Know the personalities and egos in your band and how to manage them. You don’t have to be best buddies but you do have to be able to gracefully navigate the give and take that goes on with making music. Concessions will get made all the time, especially during the recording process and you have to be able to roll with that. Oh yeah, and learn to take criticism because you’re going to get some.

Favorite UNC basketball player ever? And will UNC repeat in ’10?

It’s got to be Tyler Hansbrough. Any guy that stays four years, never loses to Duke in Cameron Indoor Stadium, knocks JJ Reddick out of the all-time ACC leading scorer position and leads the Heels to the NCAA title has to be right at the top of the list. He did everything a Tar Heel fan could ask for. 2010 will be one of those rare years with lower expectations for the team, much like 2006 after losing our top 7 scorers. If Larry Drew plays well you never know but The Heels will be pretty thin in the backcourt.*

Whatís something about the KM that not many people know?

The first real Manx recordings were a tape called the Paramus EP and I’ve been thinking about how great it would be to update those songs. There are some cool ideas there and we have one track that will show up in your nightmares for years after hearing it. It’s called “Developing Fetus.”

If you had it to do all over again, would you?

Yes. And we’d probably be so much better at it the second time that we’d earn an awesome nickname, like “The Cirque du Soleil of Indie Rock.”

To listen to and learn more about The Kingsbury Manx go HERE or HERE.