Back To Back Gold - RVA Mag 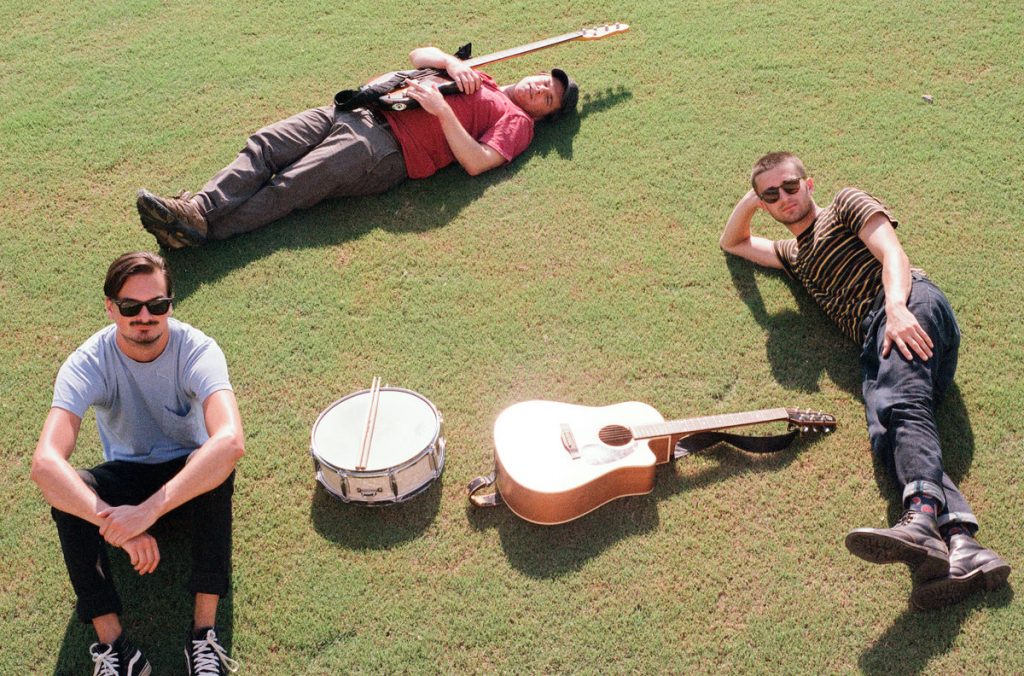 In spite of the contrasts between the two releases, digging into both the new EP from Charlottesville’s Gold Connections and their previous EP reveals equally great results.

Gold Connections, a Charlottesville-based underground-arena rock band led by guitarist/songwriter Will Marsh, released a new EP, Ammunition, early last November. Their hometown certainly enjoys them; Ammunition is ranked 46 on WNRN Charlottesville’s listener picked Top 100 Albums of 2020. Over the past months, I’ve heard Ammunition tracks “Bleed” and “Stick Figures” on the independent radio station’s playlist, as well as a cover of the Grateful Dead’s “Friend of the Devil.”

Ammunition follows the band’s previous EP release from March 2019, Like A Shadow. Both are quick listens. Short and sweet can be great, and neither of these albums will fail to make an impact.

In what context do they belong? On long car drives when you are eagerly switching albums with your significant other/co-pilot, or when you’re doing just what I’m doing as I write this – taking a short afternoon break from virtual responsibilities. I could plug in corded headphones, sit next to a big receiver stereo, and enjoy either of these albums in a sitting. Both have a smooth, kick-back-in-your-socks rock feel. My favorite individual tracks overall are “Like A Shadow,” “Don’t Tell Me Your Dreams,” “Turn,” “Locust Days” and “Stick Figures.”

In a big world of music, why listen to this band in particular? I’m on the fence about whether the best reason is for the philosophy debates or for the refreshing melodic constructions that shift with deft and whimsical wiliness. One of my favorite of their lyrics comes from “Plague 8,” off their first full-length, Popular Fiction. The title is one of several that suggest the songwriter’s background interest in Judaism. The lyrics are empowering and liberating.

I’m not in love with anyone or anything
I am enchanted by the pow’r and the pain
Of being in the world of
Pure emotion
The audio was coming in, but the image was not clear
The colors covered me but soon they just disappear
Into a world of pure emotion
It’s pure emotion

Critics have filed this group’s sound in the tradition of acoustic Springsteen, or Neil Young. Some of this territory that Gold Connections covers — folk melody with a western, outlaw inspiration — manifests on Ammunition. The opening title track is an innocent, modern outlaw rock song, where the speaker is a youth in suburbia seeking refuge from his lover’s disapproving mom. The speaker is getting in trouble for love and calls to his “baby” to help him defend their relationship. I generally don’t find guns charming; one of my mom’s favorite contradictions is that of Foster the People’s “Pumped Up Kicks,” with its dark, subversive lyrics and seemingly gentle, harmless melody. “Ammunition” feels more rugged and raw but still, “love bullets” fly right under my radar, and this outlaw couple is indeed charming.

“But you don’t get hung, just hung up” in this world of optimism for a future that still shares the pain of starting over — when memories of the library, of getting drunk, listening to music, and taking out the trash, are “dating,” and getting hung up on love makes one a kind of criminal. According to the song, unlike murder or a robbery, being in love (/failing) is comparable to a crime. It “happens to everyone” and “takes some time.” Big thank you to contemporary songwriters. Often, your words are a comfort and justice for all the silent thoughts I keep to myself.

Funnily, according to their updated website, this band accepts fan emails containing “suggestions and/or feelings.” So that’s track two, “Stick Figures.” Poppy, in a nutshell. It goes for a catalogue of all things awesome — like one of my old favorites, Bowling for Soup’s “1985” — but this one celebrates the trials of love in the “Late Obama Era.” The speaker rallies and winds up staying up late, watching the TV of his memories.

So far, the album’s approach is light, humorous, colorful. Pop rock with a twang. The band classifies themselves as “arena rock for the underground,” and I’d say that their catalogue of lifestyle images is within my own bubble. Therefore, my opinions about how well it meshes with people outside of my bubble would be distorted. By the way, I’d also like to see a photo of an underground arena. I think it’s an oxymoron.

Track three, “Bleed,” re-incorporates another of the group’s penchants for heavy, grunge rock sounds. It heavy-handedly mixes dark metaphors, but then rises out of confusion to simply sing, “You’re in my heart.” Could you love any more than a love that makes you bleed? Can you suffer any further past breaking strings? This song expresses a rebellious devotion. Neither person can be defined or depended upon, but both people can make the other bleed or cry. The limits of their relationship are undefined, and working things out is a mark of the individual’s strengths.

Track four, “Fortune,” addresses anger and death. A sustained, rapid tempo runs through this whole album, and this song is no exception; the texture is free and wandering, but polished like dice. Creative and scattered lyrics contrast with the music. The sound is a refreshing pick-me-up. The bass rhythm is strong, but like the singing voice, is light and bright. Anger finds a beautiful release. I enjoy the metaphor of “sticking around,” meaning one must play their fortune.

Track five, “Slow Diving.” Here, I want to recount the most instantaneous, bizarre crowd transformation I have ever seen: when Tame Impala took the stage at Bonnaroo in 2013, and the crowd collapsed into half its volume in ten seconds. Tripping on the windy western guitar waves, the final track on Ammunition takes me to a great place that makes me think of Tame Impala or Mac DeMarco. I like the contrast of bright lead guitar notes with the dark rhythmic strumming at the end. The suspended tension makes me feel like I’m watching the Windows Media Player visualizer. The cycling and inverting of a sound. How it seems to collapse and restore itself from nothing.

This is a quick album, and a quick listen. These are all short, up-tempo tracks, and they achieve a polished and cool sound. It fits with the band’s name, Gold Connections, because I find their sound to be bright and inspired by light.

But then again, there is also their 2019 EP, Like A Shadow. This is Gold Connections crooning for a “melancholy baby.” Heavy, semi-distorted vocals on the rock edge, and a classic, good melody that haunts me – I’m grasping at straws, as they say, and trying to place the nostalgic feelings I have. Intro notes of the title track play, and I’m in the 80’s listening to “Jessie’s Girl,” but I fall back, back, back to relax into a riff with the dramatic potential (see arena rock) of John Cougar Mellencamp, and the even-ness in delivery of Tom Petty. Something I like about Will Marsh’s music is deft development of melody – lots of tension and buildup with the guitar strumming. This song takes the mellow route with a great fade-out.

Track two — “Locust Days.” Love the open references to religious influences on each of Will’s albums. This song is an honest dedication to the band — another one of those I liked this year was Car Seat Headrest’s “What’s With You Lately?” On “Locust Days,” I enjoy broad references to my love, my God, and “The West,” which contrast with concrete images – a road trip to D.C. and roadside cigarettes. The memories feel cherished and unique. “The West” is broad and big and bold, and invokes feelings of excitement inspired by the highway on an adventure. I often think of Bob Dylan when I hear Will Marsh’s expansive references, and I feel that they carry big musical inspirations with them, to which they dedicate their music. Musical and light, this song builds up to bright and gentle sounds, a pretty “round” at the end. “We want summer all the time.”

Track three – “Don’t Tell Me Your Dreams.” Intro to this song has a pretty verse that picks up immediately, is kind of complicated and leads into a complicated refrain. There isn’t much time for a breath in this song, and I think it plays nicely by picking up the after the previous song’s final repetitive ending; it even speaks back to it with a little irony. Acoustic guitar and the favorite vocalist style. This song discusses the blues, but quickly, like it doesn’t have time for the past, and has a beautiful ending that really leaves the listener in a different place from where they began, still perplexed about what just happened. So deft and complex is the song construction.

Track four – “Turn.” This song takes a flat intro, bending it down into a major chord. Where does it take me? To the liminal, slow Beatles songs like “Girl,” or “I’m Only Sleeping.” But then, it’s also retro in its approach, more like their early music, because it appeals to boys and girls getting together to dance. Acoustic guitar picking is very warm and distinctive, and the feel of venturing, perhaps into another genre…  The vocals play off the warmth by fading upwards into a sharp, cooler note. Playful, entrancing and static, because the title calls for a turn, rather than a step into the unknown. Rhythm is spot on and so well done, as it leads a listener confidently through the weaving pattern of this song. I like the way it almost leans to and fro, mirroring the wavering vocals of the refrain.

In all, both of these albums, Ammunition and Like a Shadow, end in a very cool, modern dance-rock space. I think Like A Shadow is a little more introspective and melancholic than the tougher Ammunition, but listeners will find that both albums finish looking outward on the unknown future. Gold Connections has an inspiring, refreshing rock sound, and I most look forward to hearing this music (and really any music) live.