Bass Around The World: An Interview with Chip Hale - RVA Mag 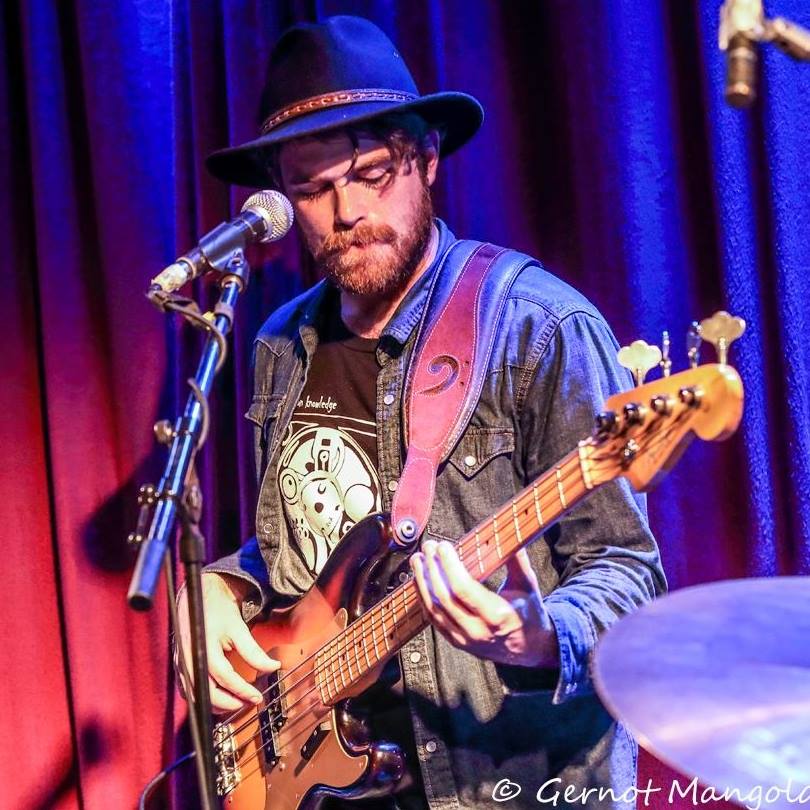 Chip Hale is a producer, musician, and the owner of 6807 Studios. He plays bass in Richmond’s Moosetrap, but what really made us want to talk to him was his production work — specifically on Justin Golden’s latest record, Hard Times and a Woman, which is getting rave reviews. Kelli Strawbridge talked to Chip about his relationship with Justin, studio production methods, and more.

Kelli: So I’m gonna start with this. How did you meet Justin?

Chip: Justin and I, we go way back. Like, really far back. We both went to Longwood University. There was an open mic there. It was, like, the only guitar store music store around, this place called Buffalo Creek guitars, and they would have an open mic once a month. Essentially, you would spend your entire month preparing for that, and you’d get your four or five song set together, and you’d go and you would hope you didn’t blow it. [laughs] And that’s where I met Justin. I think, if I’m not mistaken, [Justin had] just started really playing guitar, and was doing these really intricate finger-picked renditions of tunes, and playing some of his own music. We’d known each other in that scene, and then started hanging out, outside the open mic. And he’s a big reason that I moved to Richmond at all.

Kelli: Really. Okay. Very Instrumental in you coming to Richmond.

Chip: Remember, I was still in living in Farmville. And I ended up crashing on his couch, and Justin was just like, “Dude, you gotta just move out here. Why are you still living in Farmville?” I was like, “[I’m] not quite sure.” And soon enough, he was calling me to come play with [Justin Golden And] the Come Up, and driving so far to do rehearsals and stuff. It was inevitable.

Kelli: Nice, nice. The pre-production for Hard Times And A Woman started with you and Justin at your studio?

Chip: This room right here. This is 6807, studio A. [laughs] Upstairs we have a studio B room, which is more of a live sort of rehearsal space. Drum room, that whole thing. But this space here — which is padded out, and you can see the guitars and stuff in the back; there’s some preamps and keyboards over here — every single song that’s on the record started in this room. He came here; he would have an acoustic guitar. We would just figure out the BPM, what the tempo was gonna feel like, where it was comfortable. We would record an acoustic demo and then the two of us would just sit here and layer on parts, program drums, and try to figure out how to make these songs click in all the right places.

By the time he would leave here — which, the sessions averaged maybe two to three hours apiece — we would usually have a demo that sounded like a finished song. “Keep It Together,” that demo is pretty much point for point, note for note, the same as what’s on the record. Except we had live drums, you know, and different layers and things. But all the songs started that way. And then we did just one day of rehearsal with myself, Nate Hubbard, who played most of the lead guitar, and Drew Barnocky, who played drums. The four of us went upstairs and knocked out all the tracks, pretty much in one sitting. They had all the parts; all the parts were already finished, and the sounds were there. We were taking notes, like: “All right, this is the pedal we used for this. How do we get this fuzz tone for Justin?” So when we went to Minimum Wage Studios, we were literally just there for his microphones, preamps, and that room.

Kelli: That’s excellent. I don’t think I really understood pre-production at all until a year or two ago. I do various projects, and I never thought about the importance of it. And the fact that you guys really hammered out these songs… let me ask you, do you try to do that for every project that you’re producing? Do you try to have a lot of pre-production? Is that just part of your method, just having preproduction before you do any record with anybody?

Chip: With anything musical that I’m a part of, it’s like: how are we serving the music? How are we best serving the song? And I know that Justin, prior to this record, had minimal studio experience. And when he had worked, they put a band together quickly and just went on the floor, knocked it out, and he had great results. The songs are good. But he knew, and I knew, that we wanted to do something that was gonna be bigger, a little bit more defined. To me, that was the goal always in mind: how are we gonna make this song move? How are we gonna get from point A to point B with as much, or as little, as necessary?

Kelli: Can you say if there was a producer, or sound, or record, or feel, that influenced you? Was there some kind of vibe that you wanted to help convey with this record?

Chip: There were a ton of records that [Justin] and I both had had listened to, or people we’d even gone to see live. Guys like Phil Cook, who we absolutely adore. But for me personally, the works of Blake Mills are always a huge influence is for me. I think he’s a musical genius. Anytime he works with Shawn Everett. Those guys are LA dudes, but I think of that Sound & Color record by Alabama Shakes as, like, if I could ever create anything that sounds half as good as that album, then that’s the accomplishment. [laughs]

Kelli: What’s your favorite bass, and what did you use for the record?

Chip: So I think four bass guitars ended up on the record, four that I own. It really was just a matter of what’s the right sound. It’s crazy to think this was recorded in the beginning of 2021. I have this ’58 reissue [Fender] P [Precision] Bass. It’s very [Booker T & the MGs bassist Donald] “Duck” Dunn, a homage sort of thing. Gold pickguard, the whole nine. I feel like I grew as a musician with that instrument. I’ve had it for multiple years and been all over the world with it, you know?

Kelli: Talk that talk. Okay! Been Around The World!

Chip: I mean, I figured you wanted a nice quote for the mag: “He’s been all over the world with this instrument.” [laughs] I’ve got a Beatle bass copy thing; my dad got it for me when I was starting out. I think I got it at Sam Ash for $120. And just put a set of flats [flatwound strings] on it. And it does that Paul McCartney kind of thing. I believe that’s on “The Gator.” Anything that’s really heavily picked, that’s my go-to; it just slices a mix. It’s that sound! It’s what we’ve all heard a million times.

Kelli: Tell me a little about “Can’t Get Right.”

Chip: I hope that Justin reads this, because he doesn’t know this, but I was like, “This isn’t working, let me talk to him about just dropping it from the record.” And then the day after we had that session, I was walking around the house. I was probably working on Tyler [Meacham]’s thing, and it was stuck in my head. I was singing the chorus and I was like, “Oh no, it can’t be gone. because I’m already addicted to it.” And Nate came in — we did our band pre-rehearsal, and we actually brought him in for one of the pre-production sessions — and he just said, “We have to simplify the chord changes.” And he was right. Make it essentially a four chord song, as opposed to having Justin [play] a couple little passing chords and things.

Kelli: What’s coming next for you?

Chip: I don’t have anything lined up in terms of just sitting in the producer’s seat. I will be engineering and working on the next Dead Billionaires record.

Chip: We’re hopefully doing some really fun, cool stuff with that. I think those guys have such a fleshed-out sound, that three-piece rock thing, but I think Warren [Campbell] is just essentially like, “Man, I trust anything that comes outta your hands is gonna sound good.” [laughs]

Kelli: Justin’s record got me thinking a lot about musicians, especially Richmond musicians, putting themselves in the producer’s chair. There’s always different kinds of logistics and reasons why people do or don’t do it. Do you have any feelings on that? I feel like you’re helping set a good example of how to do it where it doesn’t seem as self-serving, just purely for musical reasons.

Chip: So, I think the idea of a producer sometimes gets a really bad rep, and it might just be how it’s portrayed. That term nowadays, especially with social media the way it is, “producer” gets this really bad sort of vibe. Like somebody’s gonna come in and destroy everything that you’ve worked on and created as an artist. Somebody’s gonna come in and put their fingers all in it.

And if you’re a studio owner or you’re a producer, or even just a musician who’s looking for a place to record, having an open dialogue is always important. The role of a producer is so vast, and at the end of the day, the goal in mind is to get the project from point A to point B. You are producing a product, and you have to do whatever it takes to get to that. If that means having a really involved pre-production, like I was saying about Justin’s thing. We did that so we could have studio time somewhere else that was big enough, in terms of space, to have everybody in the room. To be able to utilize some things that we wouldn’t have been able to if we just took the songs in there and rehearsed them, you know?

Chip: You save money in the long run. I enjoy the process. I enjoy helping bring to life what artists really want to hear out of themselves. We’re not settling for anything.

You can see Chip Hale playing bass with Tyler Meacham’s band on Friday, June 10 at Gallery 5, where they’ll be celebrating the release on vinyl of Meacham’s new album, Into The Fray. Tickets are $8 in advance and can be ordered here.