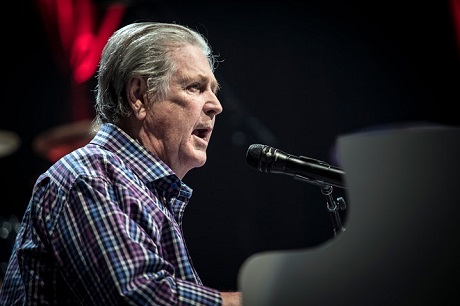 It’s really hard to accurately describe last night’s Brian Wilson show at The National. It’s not that it wasn’t great – trust me, it was truly excellent and left an indelible mark on every attendee’s memory. No, it’s hard to describe the show because of just how surreal and uncanny the entire night was. It was evident from the start with in the twisty opener “Heroes & Villains.”

There were dozens upon dozens of things on stage to direct your attention to, each as fascinating as the last and it didn’t just stop there on the modular song. Throughout the whole night, there was barely any time to pause and reflect on what you heard as the larger-than-life arrangements just kept unfolding in bigger and grander ways that eclipsed any semblance of narrative. Daunting, cathartic, mesmerizing, and totally ineffable. It was unlike any show The National has ever seen and just like Wilson himself, there will never be another quite like it. 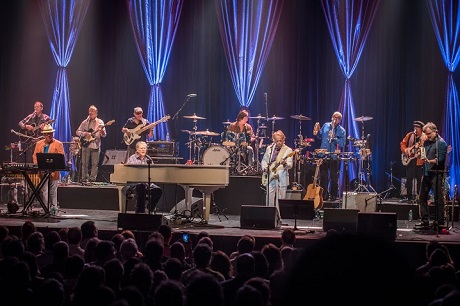 Let’s get one topic out of the way real quick – Brian Wilson is not a performer. In fact, the notion of Brian Wilson coming to Richmond to perform on stage is bizarre enough given his reluctance to tour in the past. Wilson’s resignation from The Beach Boys’ touring act in 1964 is well-documented and his uneasiness towards touring is an integral part of his spectacular biopic earlier this year Love & Mercy. “You don’t need me standing up there looking like a jerk,” exclaimed Paul Dano’s interpretation of Brian Wilson in the film.

It’s this line that perfectly sums up the internal struggle Wilson seemingly has with being a producer and composer as opposed to an artist and performer. It’s not that Wilson was the “jerk” that his cinema counterpart claimed – more that Wilson is clearly reluctant and out-of-place being the focal point on stage in a performance. Performing does not come naturally to him even if he did physically express the music and lyrics in a few moments. But for those sparse moments behind the piano, it was clear they were very much pre-planned actions that Wilson had to consciously remember to do. For the most part, the nearly-stoic Wilson sat behind his piano with his eyes wandering across the balcony or orchestra seats with a gaze that just left you wondering: “What in the world is he thinking?” Don’t misunderstand this talking point though. The absence of showmanship in Wilson did not take away anything from the quality of last night’s show. In fact, it’s almost the opposite as it subtly added to the already reverent mystique of his compositions. Still, anyone going to the show last night to see Brian Wilson was in for a rude awakening. 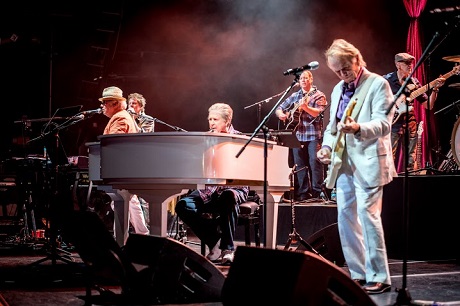 So if you don’t go to “see” Brian Wilson, what was enticing about last night’s performance? Well, everything really. Wilson and ten other band members unraveled a complete experience to the live crowd seated on the floor or the balcony of The National. There were exciting surprises, somber reflections, joyous celebrations, and pure rock-and-roll breakdowns. Top to bottom, you couldn’t ask for more in a show. The addition of original Beach Boy Al Jardine and long-time contributor Blondie Chaplin delivered the “performer” aspect that Wilson just couldn’t present while Jardine’s son Matt provided the night’s greatest surprise and perhaps pleasure for his flawless take on Wilson’s celebrated falsetto voice that defined so many of their songs. After coming to the front of the stage to perform Wilson’s stunning vocal part on “Don’t Worry Baby,” Richmond could barely contain their admiration as they quickly vaulted out of their seats to show their appreciation. With Matt & Al handling the charm and Blondie carrying the showmanship, it was more than enough to make up for Wilson’s reluctance and towards the end of the night, that indifference almost became its own charm. 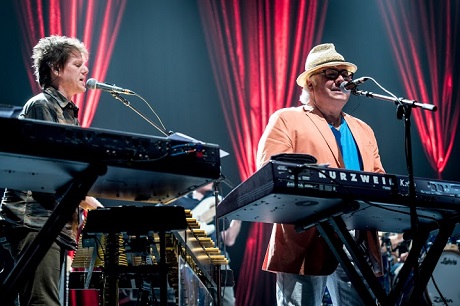 As for the songs, the large band on stage touched down on the acclaimed songs that led people to label Wilson as a “musical genius,” but there was plenty more on the set-list than just the band’s well-known hits. Several tracks from Wilson’s latest album No Pier Pressure made their way into the set and many of them, notably “The Right Time,” found themselves fitting perfectly alongside songs like “Wouldn’t It Be Nice” and “I Get Around.” If they hadn’t alerted the audience to the fact that it was on the newest album, anyone could have easily assumed it was just a discarded B-Side from fifty years ago due to its timeless charm. On top of that, the set dived deep into the Beach Boys catalogue for some excellent, but lesser known tracks such as “She Knows Me Too Well” (a celebrated 1964 B-Side) and “California Saga: California,” an Al Jardine penned track whose inclusion was strange for being on the Wilson-absent album Holland. The inclusion of Chapman meant his iconic performance on “Sail On, Sailor” made an appearance and Wilson’s infamous obsession with Phil Spector snuck its way into the show too with a cover of The Crystals’ iconic song “Then He Kissed Me.” It wasn’t just all sunshine and hit songs for the set though. As mentioned, the band opened with a track from the legendary Smile project and played that collections’ central song later on too. Hearing “Surf’s Up” live is completely indescribable as was the reaction from the crowd afterwards for a song so divisive in its conception. When Al Jardine referenced the iconic 1966 performance for composer Leonard Bernstein on Inside Pop: The Rock Revolution and hammered home the blatant fact of Wilson’s genius to the crowd, there was not a single person in the crowd not voicing their vocal support for the off-kilter musician. 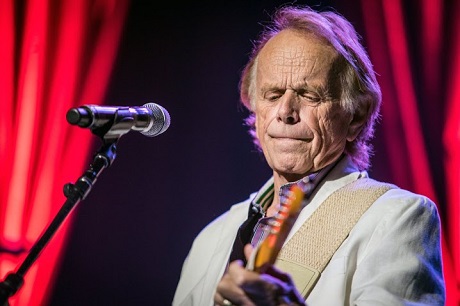 It was an incredible night from the moment Wilson sauntered on to stage. Every last detail of the show seemed extraordinary whether it was a guitarist shifting to French Horn quickly or Blondie wondering around the stage looking lost. It was hard to take in the entirety of each song’s arrangement, yet if you focused too long on a single part or melody, it was clear you were definitely missing out on something equally as interesting and rewarding. From the countless standing ovations (including after the first song) to the final onslaught of iconic hit after hit, the cross-generational audience not only seemed unable to hide their excitement, but proudly unwilling. Wilson himself tried to shield himself from that excitement on multiple occasions. He naturally turned the spotlight to the Jardines and the fantastically talented members of his band at several points in order to hide from the public eye. When it came time for the band to gets its own introductions, the eccentric mastermind scurried in as quickly as possible after Al Jardine to avoid the cheers and just get right back to the music. He had the right idea too – it was the music that provided a cathartic night of familiar and surprising joy so strong that I’m sure everyone driving home that night found some way to put on a Beach Boys track in their car. As timeless as they are, those in attendance last night know the only way to make them better is to get Brian Wilson to arrange a full band around them. That’s just what Richmond got last night too – an unfathomable improvement over a classic sound. Well, maybe it’s not so unfathomable coming from Brian Wilson.