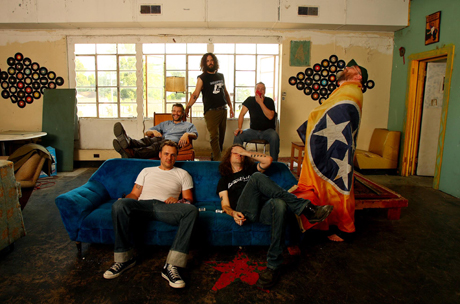 Bringing It Back Home to 1372: A Conversation with Lucero’s Ben Nichols

1372 Overton Park is a strong testament to the lore of Memphis, Tennessee. This creative fertile spot acted as a dojo for the legendary Elvis Presley to practice his martial arts. Known for his time in the spotlight, perhaps the moments spent at 1372 Overton Park were calm for the superstar. He could resonate a sense of peace through his being and perform even better as an artist. Under those circumstances, it makes sense that a band like Lucero would call this place home. It makes even more sense that without 1372 Overton Park, there may be no Lucero.

1372 Overton Park is a strong testament to the lore of Memphis, Tennessee. This creative fertile spot acted as a dojo for the legendary Elvis Presley to practice his martial arts. Known for his time in the spotlight, perhaps the moments spent at 1372 Overton Park were calm for the superstar. He could resonate a sense of peace through his being and perform even better as an artist. Under those circumstances, it makes sense that a band like Lucero would call this place home. It makes even more sense that without 1372 Overton Park, there may be no Lucero.

Over the course of a phone conversation, Lead Singer/Guitarist Ben Nichols and I spoke about the meaning of this spot to the band. “The story behind 1372 is that it made it possible for us to tour. We were able to go on tour, live cheap, buy a van and do all the things it takes to be a band,” Nichols recalls.

This year commemorates the ten-year anniversary for the group. Considering the importance of this locale, the band figured they should probably name their sixth full-length and major label debut after 1372 Overton Park. With this record, it turns out Lucero has released their most Memphis-sounding record. Each song is layered with horns and pedal steel along with the charm of Nichols’ approach to songwriting as a wise storyteller. This is a record that demands the city of Memphis to put the band’s name into the musical history books.

With the assistance of producer Ted Hutt, Lucero was able to incorporate a number of new ideas into how they usually operate. For the first time, the band was asked to submit demos of their new material. In doing so, Hutt was able to helm the songs along with the band and help Lucero create their most functional and confident release yet. When asked about the inclusion of horns on 1372 Overton Park, Nichols had quite a story to tell.

“The horns were more of an accidental experiment or an experimental accident. We had these new resources, so we thought we would at least try out the horns. When they were first used during the recording process, we instantly fell in love. We needed horns everywhere on the record. So, we went with Jim Sparke and I think he did a fantastic job,”

Prior to the release of this record, Nichols had worked on a solo EP. The EP was based around Cormac McCarthy’s novel Blood Meridian and was entitled The Last Pale Light in the West. This wasn’t a first for the songwriter. On Nobody’s Darlings, the song “Bikeriders” was based on a book of photography entitled The Bikeriders by Danny Lyon. On Rebels, Rogues and Sworn Brothers, the song “Cass” was based on a short story by Charles Bukowski.

For 1372 Overton Park, there were two songs in particular that Nichols based on existing texts. “The Devil and Maggie Chascarillo” exists because of Jaime Hernandez’s work Love and Rockets. Nichols discovered this series at a young age and it wasn’t until he would get a bit older that the stories made more sense to him. He also mentioned that the song ends up being a fun song, which the band isn’t usually known for. “Johnny Davis” on the other hand is a return to the world of The Bikeriders. Lyon’s work represents a world that constantly intrigues Nichols and something that he felt necessary to return to with this release.

“The Devil and Maggie Chascarillo”

The last time the band ventured to Richmond it was for Friday Cheers. This was the biggest event that Lucero had been invited to play up to that point in this city. In many ways, this performance and event helped highlight what appeals the most to Nichols about the band.

“I think a show like that goes to show that we aren’t stuck to one type of crowd and that’s what I like about the band. We can have everyone from the crust punk train hoppers all the way to the balls to the wall frat boy. That’s the thing about Lucero, the songs are easy to relate to and I wouldn’t want to make anyone feel like they couldn’t listen to our band for some reason or another.”

When asked about their most memorable Richmond experience, Nichols figured it had to be their two-night stay at the Nanci Raygun prior to the recording of Rebels, Rogues and Sworn Brothers. It was the hottest show he had ever played and to have an acoustic Avail perform before them was an honor. While recollecting that show Nichols mentioned that he recalled Beau sitting on stage in a lawn chair during Avail’s set. As much as Beau loves the boys in Lucero, according to Nichols he doesn’t really like Lucero as a band. As a statement of protest, he decided to sit in defiance while his band played on. It was all in fun spirits though.

One of the best moments from 1372 Overton Park is the song “Hey Darlin’ Do You Gamble?” I couldn’t help but ask the singer as to the story behind this particular tune. He mentioned how he was watching this documentary about Townes Van Zandt entitled Be Here to Love Me. There was a moment where Zandt approaches a woman he was going to end up marrying. His first words were the now infamous words “Hey Darlin’ Do You Gamble?” In that defining moment, the woman in question knew this would be a man that she’d find it difficult not to fall in love with. Nichols couldn’t resist lifting that line and writing a song based around it.

“Hey Darlin’ Do You Gamble?”


1372 Overton Park feels like a new page for Lucero. It’s a phenomenal release by a band that I fear many may have written off after their last two releases. The band may not be the same as they were on those first three full-lengths, but who can expect any musician to remain the same. They return to the city of Richmond this Wednesday to show off some of their new songs and dust off the old favorites. I guess Nichols put it best when he asked do you gamble.

So Richmond, do you gamble? Because I think Lucero may have released one of the best records this year and it’d be a shame to miss them recreating these songs live.

Lucero is playing Wednesday October 14th, 2009 at the National Theater. They are playing with Amy LaVere and Cedric Burnside & Lighnin’ Malcolm. Tickets are $15 (Advance) and $18 (Day of the Show). Doors at 7pm/Show at 8pm