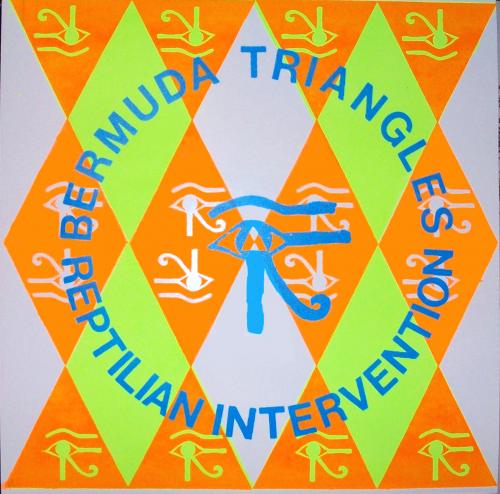 I am going to be as objective as I possibly can in reviewing the newest Bermuda Triangles’ LP Reptilian Intervention, released last May on the CNP label. This is going to be a hard one, for these lads are dear friends of mine, but fuck it. I’ve been around music and the life behind it long enough to know this band is the best band currently in Richmond, whether I’m friends with them or not.

When I first heard Reptilian Intervention, I heard the quality sound, engineered and recorded by Kevin Willoughby. To capture the Bermuda Triangles’ sound is an uneven task to say the least, but Willoughby turned front man Jason Hodges’ written songs into pieces of a revolution. Richmond is known for almost everybody doing the same thing, but that was not the route taken by this album of layers, shapes, sizes, space, colors and randomness. I don’t know about you, but shit on shit, we need that in our lives of listening. To compare this experimental, no wave, psychedelic and tropical noise music making foursome to any other band would be a travesty. Hence, it’s time to be a part of this intervention.

Reptilian Intervention charges up the mountain with the first cut, “Bloo.” “Bloo” takes the listener to an upside down Caribbean feel on the back of a haunting background sax, played vigorously by Sean Cassidy. Hodges’ voice and keystrokes are scientific, for this song only prepares one slightly for the mesmerizing quest ahead. The title track, “Reptilian Intervention,” is next in line, and Jesus fucking Christ. This song starts slow and confusing but billows its way into the back of your mind. You will never think the same way about life again. Like with other bands’ songs, some songs are just better live than on the album. The song “Reptilian Intervention” is glorious live. Let’s go to song three, shall we.

“Pulses Emitting From Deep Space” is the best song anybody in Richmond has written, let alone performed since McClellan’s siege of Richmond. Jared Young and Bill Porter’s percussion here is an easy chocolate that bestows greatness. All together, this song is an orgasm. The forth track is “Leviathan.” Um, not a fan of this song at all. As the middle of the album arrives, I realize I don’t know how to explain the technical side of the way this album was recorded, produced and engineered. But oh how I do respect the way it was all put together–and we’re only half way through.

Track five, “Sleepwalking,” is a perfect song for going outside to smoke a cigarette to. Track six is my personal favorite; “No Proof No Truth” is led by utility man Bill Porter. Porter carries this song. Cassidy’s sax, Young’s precision, Porter’s bullfrog guitar, and Hodges’ voice keep me smiling with this song, and that’s why I love and never miss a Bermuda Triangles show. “Riddles In The Sand,” which is at lucky seven, is just that, lucky. Bands need radio-worthy songs that rape society’s attention deficit disorder. This is the cut, my friends. Hodges shines in voice, and Young and Porter’s percussion mesh as nice as a Bev’s Ice Cream float, with Cassidy’s sax sneaking up the backside to round out this fabulous jigsaw puzzle of sound. “Riddles” will leave you in awe.

“The Awesome Power of Reptilian Jaws” takes the eighth spot, and I just have to say that if I was wandering around King’s Dominion, this would be the song in my head. It’s a song that is catchy, yet I need more substance here. Last, but not least is my favorite song Hodges did when Bermuda Triangles was just him solo. Oh how this song has matured. Now that the band is a four piece, “Cannibal Island” is a four star song. It directs you out of Reptilian Intervention in a most auspicious way.

There is no doubt in my mind that this is the hardest working band in Richmond. The Bermuda Triangles are on to something. Reptilian Intervention just solidifies this point. My only advice to the Bermuda Triangles is if you are in the same place as a band you are in now one year from now, well you might want to look into other avenues. Get this album people, but only if you care about music that is ahead of it’s time.

Bermuda Triangles – Riddles In The Sand

Review by John Morgan–originally appeared at One Way Richmond