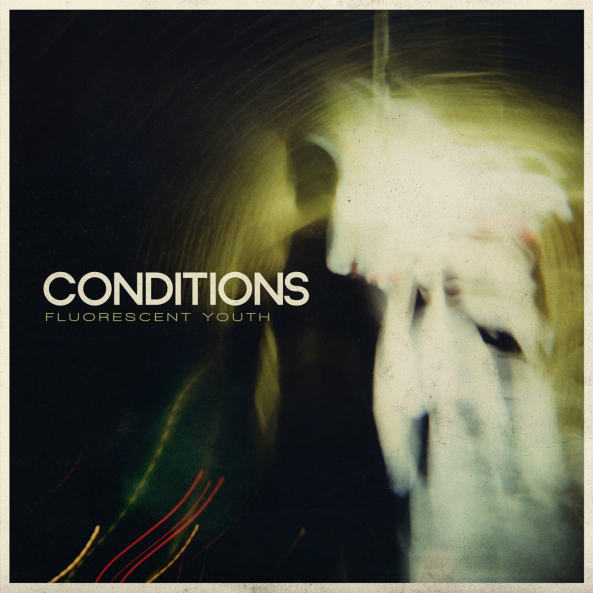 You’re never going to hear anyone make the statement “I’ve been emo since before it was cool,” because anyone who’s listened to the style of music now known as emo for long enough to make that statement almost certainly hates the term and vociferously refuses to identify with it. Having said that, I’ve been vociferously refusing to identify with the emo label for at least 15 years now, so I know more than a little about the style of music it seeks to describe. And the debut album by Richmond’s own Conditions, Fluorescent Youth, might be the best example of the form I’ve heard all year. This album isn’t a throwback, either; it’s emo as it exists in 2010, integrating strains of the alternative rock and metalcore sounds that the emo genre has spent the last decade or so rubbing shoulders with.

In fact, for those who follow both the emo and metalcore scenes, the name of Conditions vocalist Brandon Roundtree will be familiar. Roundtree was previously the vocalist in Virginia metalcore band Scarlet, who brought him in as a last-minute replacement for original vocalist Jon Spencer (no, not that Jon Spencer—this Jon Spencer). Roundtree sang on final Scarlet album This Was Always Meant To Fall Apart, but other than that album’s uncharacteristically melodic opener, “Obsolete,” it was mostly filled with pounding mosh riffs, over which much screaming was required. Scarlet’s metallic sound is a far cry from the sound of Fluorescent Youth, on which Roundtree never screams at all. Indeed, Conditions seems more like a return to the melodically-oriented sound of Roundtree’s first band, FIAD, of which Conditions guitarist Jason Marshall was also a member. The sharp divide between the similar sounds of FIAD and Conditions and the significantly heavier sound of Scarlet leads one to believe that performing in Scarlet was more of a favor to friends for Roundtree, while the sound of Conditions is the sound he, and by extension the entire band, is most interested in playing.

It is appropriate, then, that the entire album is driven by sincerity and emotion. It’s become a bit of a cliche for bands within many different genres outside the mainstream, from emo to pop-punk to metalcore, to focus their lyrics upon relationship travails in order to milk emotion from their music. Such lyrical topics must be handled very well to avoid coming across as the same sort of vapid, insincere claptrap served up to listeners every day on pandering top 40 radio stations. Thankfully, Conditions have too much to say about other topics to spend much time discussing relationships. Fluorescent Youth begins with “The End Of Progression,” which serves as a lyrical and musical manifesto for the entire album. Both verse and chorus are structured around distorted, chugging rhythm guitars, contrasted with melodic leads. The driving rhythm section pushes guitars and vocals to heights of greater intensity, with Brandon Roundtree hitting the top of his vocal register as he sings, “You are fading out as you’re slowly settling for the same. You play it safe, you end progression.” This is just the first of many times on the album that Roundtree takes a stand against the materialistic mainstream of modern culture. “I’ve been cheated, I’ve been broken, and it made me a better man,” he declares on the song’s bridge, making the point that risk is necessary to experience true quality of life–a quality for which material possessions will never be an adequate substitute. 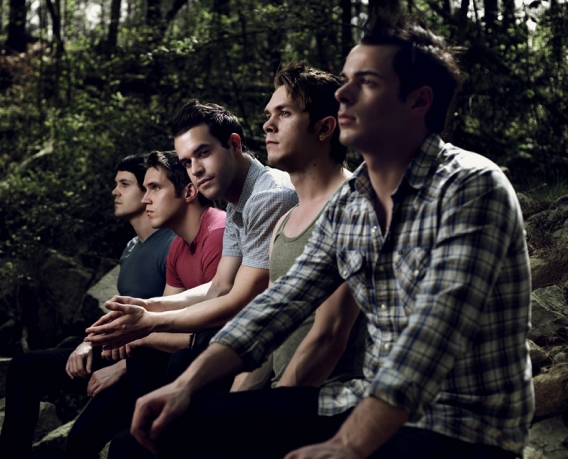 The next song, “Better Life,” expands on this theme, adding standout lyrics to one of the album’s best musical moments. In fact, Fluorescent Youth is that rare album on which the best musical and lyrical moments seem to come on the same songs, which is always a welcome phenomenon. The chorus of this song is outstanding–speedy, intense, yet gorgeously melodic. Roundtree sings, “When you fall, when you break, when you wish you didn’t feel–keep your head, don’t forget, it’s the pain that makes us real. I know most of the time, it’s hard to keep in mind, but from lessons learned comes a better life.” Like many of the songs on this album, Roundtree’s lyrics are relentlessly positive, designed to provide pep talks for the exact sort of emotional state that might lead someone to pick up an emo album in the first place. Rather than wallowing in depression and despair, Roundtree wants his listeners to get motivated. It’s an admirable goal.

“When It Won’t Save You” is a particular highlight on a uniformly good album, driven as it is by an unshakable earworm of a verse. The song begins with Roundtree singing over an otherwise-unaccompanied guitar riff: “The way that I feel and what’s supposed to be real strongly disagree. There is one thing I keep in front of me.” Now the drums come in, pushing the song towards a crescendo, as Roundtree continues to sing. “Because cash won’t save, and cars won’t transcend the grave. I call everyone I know the only things of value I could ever own.” It’s at this point that the main verse truly kicks in, and with the entire band playing through it at full power, it’s catchy enough to be the chorus of the song. Yet, when the chorus finally arrives, it’s even catchier, pushing the song up into a higher gear that you wouldn’t have even expected it to have. Roundtree is still continuing with his earlier theme of anti-materialism, which he’s previously made explicit on the song’s first verse (“I can’t chase the American Dream–trading life for money never made much sense to me”). There’s something beautiful about hearing him declare, “If I’m wrong at all for living this way, I’m alright being wrong.” Alternative music has become big business in recent years, and Conditions are beneficiaries of more visibility and promotion than they ever could have expected if they were playing the same music ten years ago. That said, it’s still hard as hell to make it playing music of any kind, and “When It Won’t Save You” acknowledges the reality that, rather than shooting the moon and being able to look forward to life as rockstar millionaires, what the guys in Conditions are really doing, in all likelihood, by spending their early 20s being in a touring band, is sacrificing years of their life during which most of their peers will be getting college degrees and beginning their careers. Ten years from now, these dudes might all be significantly poorer than the kids they went to high school with, but the experience, the memories, and the sense of accomplishment will make all of it worth any material loss they suffered in return. At least, I think that’s what Brandon Roundtree is saying on this song, and I definitely agree. 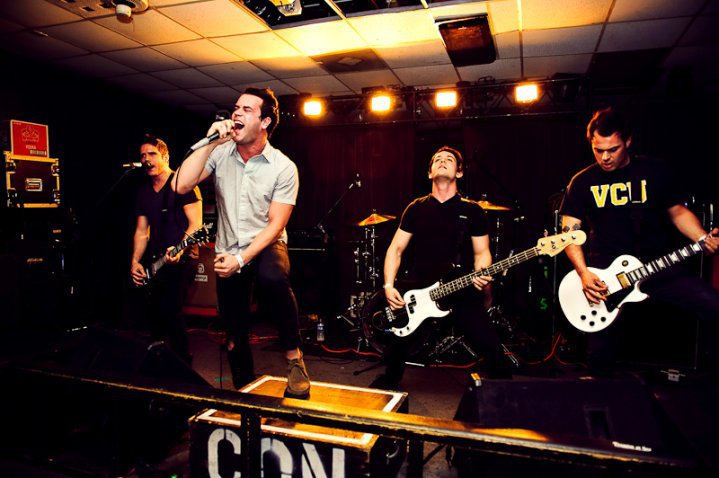 I was even more blown away by “Miss America,” another song with a stunning chorus and brilliant lyrics. On this song, Conditions take a stand against the sexist commodification of the female human form, and the effect such commodification has on women forced to grow up in a culture where their physical characteristics are treated as the only valuable part of who they are. It’s extremely impressive to come upon a band operating in the emo genre, a genre often derided for its tendency towards objectification of women, who are so willing to make a political statement like this. Even more impressive is the astuteness of their commentary. “It’s a basic human need, feeling beautiful,” Roundtree sings at the beginning of the song. “But you coat your broken body, so subliminal, and the colors that you wear hide a criminal.” His words here are addressed to a personification of America’s fashion-obsessed culture, which hides its sinister aspects amid superficially-appealing advertising. The song’s chorus is an irresistible singalong, but has lyrics that are strongly political. “Miss America is a slave from the waist down, stealing the whole town’s love. And good little girls won’t stay away.” Within the chorus is an implicit condemnation of the sort of victim-blaming many people engage in when they put down women’s attempts to conform to society’s expectations. Instead, Roundtree and Conditions point the finger of blame squarely in the face of a materialistic American culture that dehumanizes women and hurts humanity as a whole. It’s a powerful sentiment, made even more amazing by the fact that it’s so different from typical emo lyrics. I can’t help but hope that a few kids who get this album have their minds opened to a different viewpoint where this issue is concerned.

There are still many more excellent songs on this album. “Comfort Far Away” is the sort of full-scale, orchestra-backed ballad that a lot of emo bands are putting on their records lately, and while I’m not a fan of the trend in general–if the song would sound weird during your live set, don’t you think it will also be a bit jarring in the middle of your album?–I’m reasonably into Conditions’ attempt at it. It’s a weird, haunting track that, again, avoids relationship-related lyrical sentimentality in favor of concerns about living up to one’s full potential, and about… demonic possession? I don’t fully understand the song’s lyrical content, though I am intrigued by a chorus that asks, “When I sleep, when I dream, does someone else take control of my body?” A more typical–and better–song on this album is “…Made Ghosts,” which starts with a quiet piano intro over which Roundtree sings the song’s chorus. This intro is deceptive, though, as it makes the song sound like a ballad. Once it kicks in, it’s one of the fastest, most energetic songs on the album, and the difference between the chorus as sung over unaccompanied piano and with the backing of a full band is drastic and creates an interesting contrast. Album closer “Illuminati” is the only song here that seems most likely to be about a girl, but its mix of heavy, chugging guitars and strange, apocalyptic imagery (“sporadically use my tongue to reiterate you’re an oxygenated dream I long to breathe so deeply”) gives it an interesting, original feel that helps it avoid cliche.

Fluorescent Youth could be referred to as a promising debut, but that would be underselling its quality in a big way. Indeed, it delivers upon all of its promise, making clear that Conditions are already one of the standout groups in the emo genre, regardless of their newcomer status. Fluorescent Youth is one of the best albums of 2010 thus far, and I’m very much looking forward to what Conditions will have to offer in future. Do yourself a favor and get this record.