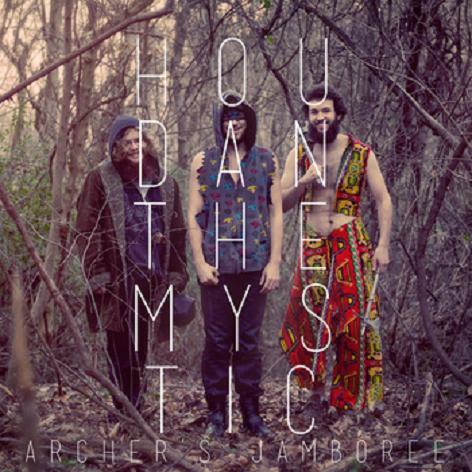 Swirling eerie sevenths open, taking you somewhere into a vortex… deeper… deeper… then, BAM! You are smacked in the face with a spastic explosion of strings and beats, which quickly shapes itself into a thoughtful head-bobbin’ jam. This is the opening track of Houdan The Mystic’s first release, Archer’s Jamboree. The Richmond band, which contains two of the members of Night Idea, has been making waves around town since their formation. Their tasteful and extremely tight blend of experimental-technical-melodic rock, heartfelt lyrics, and large beards puts them into a category they can truly call their own.

It’s always great to hear music that both sounds like nothing ever created before, and avoids being bad. I like bands that accomplish this feat even more if they hail from my hometown. Archer’s Jamboree, which was recorded and mastered by friends for under $50, lands on the sonic spectrum somewhere between American Football and Tera Melos. Being a three piece, Houdan The Mystic relies heavily on the melodic bass and intricate guitar and drum work to fill out the sound.

The album manages to pull off a fun and oftentimes humorous vibe, while remaining equally mature and sincere. Tracks like “Chasing The Strobe” start with complicated, proggy jams, but smoothly work their way into catchy as hell loops, which can get stuck in your head for damn weeks–trust me. Other tracks, like “Cosmonaut Falls,” leave you drifting in space somewhere–but then you are quickly brought back to earth by the bounce of the penultimate track, “Sleeping or Worse.” Its title, morbid at first glance, is actually quite positive, as is the mood of the song.

This album is an extremely strong start for Houdan The Mystic, and leaves this listener eager to hear what comes next. Archer’s Jamboree is an album to put on when you go to bed, or during a long lonesome road trip. It is also an album to put on at a party, or even play for your parents! And hell, they’ll probably dig it, too.