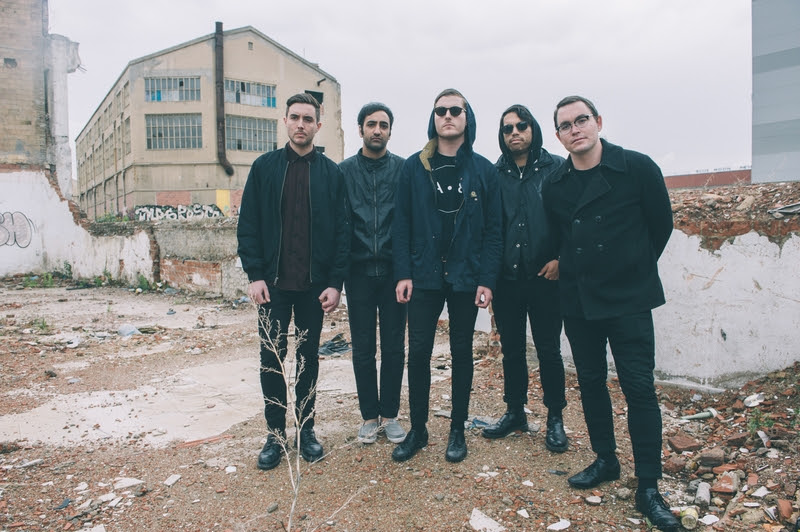 Last night I went to The Canal Club to see Deafheaven play the first show of their current tour with Pallbearer and Wreck & Reference. After the show, I staggered home with a sore back and aching knees from repeatedly bouncing off the barrier at the front of the stage.

Last night I went to The Canal Club to see Deafheaven play the first show of their current tour with Pallbearer and Wreck & Reference. After the show, I staggered home with a sore back and aching knees from repeatedly bouncing off the barrier at the front of the stage. I needed to take ibuprofen to dull the pain so I could get to sleep, and today I’m stiff all over and having trouble turning my head. But it was all so very worth it.

Before I get into all that, though, let’s talk about the openers. Wreck & Reference are a duo from Los Angeles. I had only heard a couple of songs before seeing them, and didn’t know too much about their instrumental configuration. I was expecting a keyboard player, maybe a bass player and a drum machine, something like that. Instead I discovered that the band consists of a live drummer and a guy who triggers samples. The sample guy had an MPC strapped around his neck and a pedal board that he operated with his feet. The noises he set off by stepping on pedals and playing his MPC like a guitar were harsh and pounding, mixing with the heavy rhythms played by the drummer to create an overall sound somewhere between the harsh but structured noise of Pharmakon or Author & Punisher and the dark industrial metal of Godflesh or Pigface. The band’s two members switched off on vocals, with the sample guy doing more of a harsh scream while the drummer sang through effects in a strangely melodic baritone. The result was totally unique and sometimes bizarre but interesting and good, and the members of the crowd who were open-minded enough to get past the fact that the band weren’t playing guitars enjoyed the set. Some people couldn’t make that leap, though, more’s the pity. 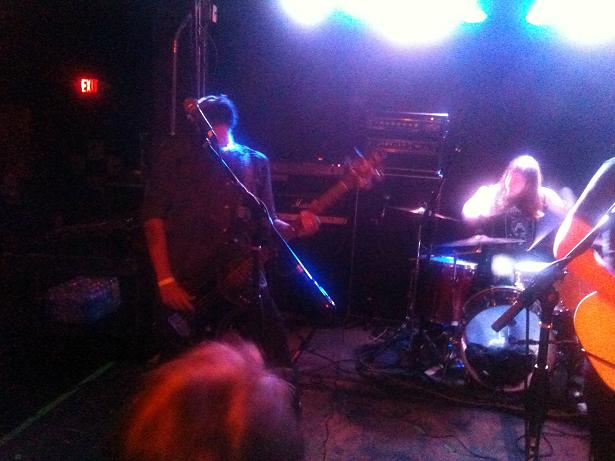 Pallbearer were next, and have quite a following in their own right, some of whom were obviously in attendance. As I mentioned earlier this week, I’m going through a bit of a personal backlash to doom metal, and I was definitely afraid that I would get bored or annoyed during Pallbearer’s set. However, my fears were unfounded–in a live environment, the volume and power of their music was more than enough to make up for its commonalities with a sound I’ve gotten really tired of lately. The singer’s melodic vocals worked for me, and he hit some rather impressive high notes while showing quite a range by dropping down into lower registers as well. The riffs were at times a little too repetitive, but the band did bust out some new songs in the middle of their set. These two songs were the highlight of Pallbearer’s performance, and I imagine the new album they’re releasing later this year will be quite a step forward for them. While they aren’t up my alley enough for me to pay to see them on their own, they definitely kept my attention while I waited for Deafheaven to take the stage. 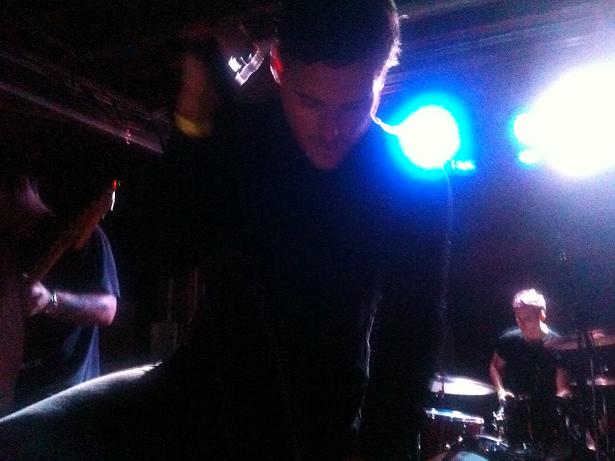 When Deafheaven did come on, they did so to an obvious buzz of excitement from the crowd. A lot of people in the room were really stoked to see them, and I was definitely one of those people. Their second album, Sunbather, came out exactly a year ago last night, and in the intervening 365 days, I’ve listened to it more times than I could possibly count. The emotionally evocative nature of both the lyrics and the shoegaze-influenced major chord melodies the band integrate into their black metal sound are big factors in my overall appreciation. Of course, the fact that Deafheaven betray an obvious shoegaze influence and make fashion choices that are unusual within the context of the metal scene have resulted in a very strong backlash from the more purist contingent of the metal world. The people like that who were at this show left after Pallbearer finished, though, and the remaining crowd was more than sufficient to provide Deafheaven with a roomful of rabid fans–many bearing X’s on their hands. The jaded old dudes don’t get it, but the kids understand.

One thing I learned from watching Deafheaven vocalist George Clarke in action last night is that being a rockstar is all about how you act. The kind of treatment you solicit during your time onstage can very much influence the response you get, especially when you have powerful music to back it up. Deafheaven are a wire-tight band that have clearly rehearsed the hell out of their material; I didn’t hear one single bum note or out-of-time drumbeat at any point during their set. But it wasn’t just tightness of performance that made them such a riveting onstage presence. George Clarke is the X factor. Performing in a black dress shirt, black dress pants, and black leather shoes (but not the much-discussed black leather gloves he’s worn on previous tours), he performs with an air of assurance that often tips over the line into superiority. During instrumental breaks, he would gesture to the crowd, indicating he wanted us to raise our hands in the air. Clarke’s response to the sea of offered hands was often to step up to the barrier at the front of the stage, reach over, and clasp the hands of random members of the crowd–who proceeded to eat it up, like they’d just touched Jesus, or David Bowie. 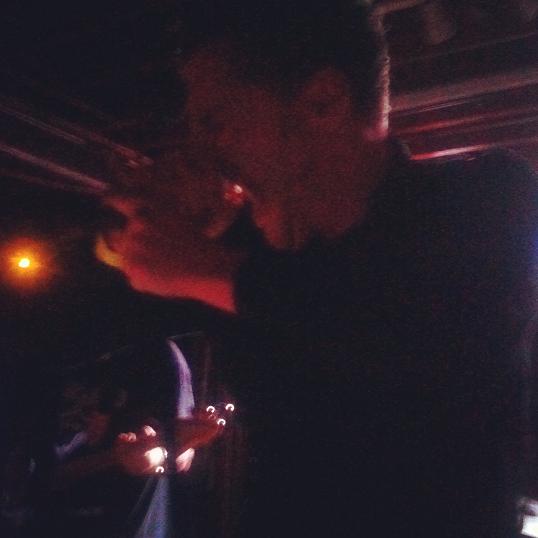 A friend of mine’s response to Clarke’s stage presence was to say “he looks like he wants to murder you,” and while I could also see the anger in Clarke’s eyes during his performance, I felt like the anger he was expressing through the lyrics was not directed at the audience but at the people he was singing about–both others who have failed him and the failures and inability to live up to potential that he sees in himself. But somehow he combines the anger he expresses, the self-assurance he portrays, and the connection with the audience that he seeks into a classic portrait of a powerful rock god. It’s an amazing thing to watch happen before your eyes, and to call Clarke a riveting performer would be a total understatement.

Deafheaven’s main set consisted of the entire Sunbather album, played in sequence, and while I have found this sort of album-copying live performance uncreative and frustrating in the past, for this band it seemed appropriate. Deafheaven have quite a bit of material that predates Sunbather, but that album constitutes a leap forward for them, to the extent that hearing its songs mixed with older songs would almost guarantee the older songs suffering from the comparison. “Vertigo,” a song that usually catches my attention the least of the songs on Sunbather, turned out to be a standout in the live environment. During its 15-minute duration, I found myself contemplating the importance of Deafheaven’s drummer, Daniel Tracy, to the band as a whole. George Clarke and lead guitarist Kerry McCoy are Deafheaven’s only constant members, and are often treated in the media as if they are the band, and everyone else is just hired hands. However, Tracy, who joined the group in time to record the drum tracks for Sunbather, is not just any drummer. His skill at laying down the precise and blindingly fast blast beats that are essential to black metal in general and Deafheaven’s music in particular is nearly unparalleled. This skill was particularly emphasized on “Vertigo,” during which he had to play an extremely fast 4/4 blast beat for multiple minutes, then switch to an even faster 3/4 blast beat before eventually switching back to the original 4/4 blast. He pulled it off without a hitch, and the tempo never flagged, even after several minutes of playing at a speed upwards of 300 bpm. 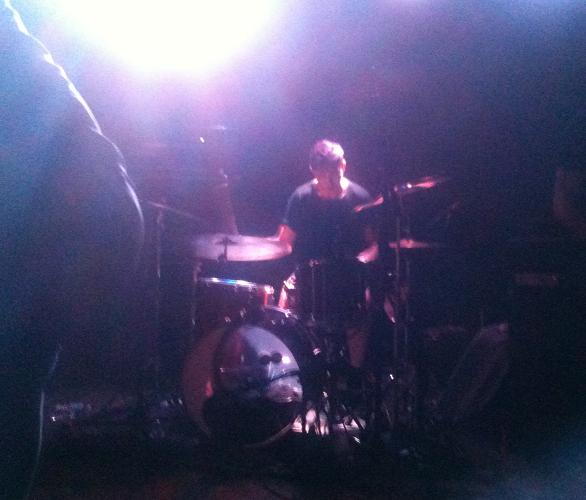 The emotional climax of the set was Sunbather finale “The Pecan Tree,” which inspired even more frenzied dancing than had already been occurring from everyone in the front few rows. I wound up pressed against the barrier with people behind me slamming into me every few seconds, but thankfully, the audience at this show avoided the kind of purposeful violence one often encounters at hardcore and metalcore shows. It seemed everyone in the crowd that night was interested in a positive communal experience, rather than competing with one another for the dubious distinction of “most violent dancer.” It helped make a great show even better.

After “The Pecan Tree” ended, the members of Deafheaven left the stage, but less than a minute later, they were back, offering us a final song–an offer the crowd gratefully accepted. They wrapped up with “Unrequited,” from their 2011 debut, Roads To Judah, and while it could not top the dramatic catharsis of “The Pecan Tree”‘s final moments, it was nice to get one more song from the band before the show finally ended. Deafheaven’s set lasted around an hour, and was extremely intense throughout; yet it seemed to fly by. Overall, I’d have to say it was the best show I’ve seen all year, and I doubt I’ll encounter its equal anytime soon. I hope these guys make it back to Richmond sometime in the near future, and if they do, rest assured I will be there.