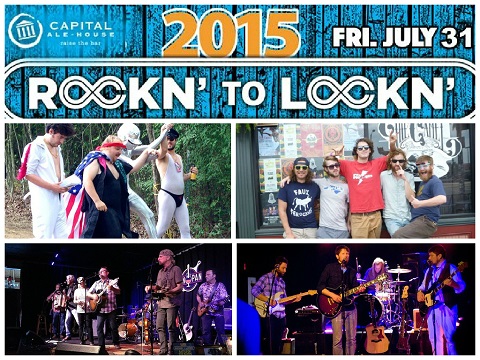 Come September, thousands will flock to Oak Ridge Farm in Arrington, VA. for Lockn Festial, an annual four-day music festival to hear jam bands from all over.

This year’s lineup features Govt Mule, Widespread Panic, Umphreys Mcgee, Carlos Santana among many others along with four lucky winners from Virginia who will have the chance to snag a spot on the main stage at this year’s festival through Lockn’s and Flat Five Productions’ Rockn’ to Lockn’ competition.

Over the last month, twelve bands battled it out at different venues in Virginia. One band from each venue will play at this year’s Lockn Festival. Next Friday, July 31, it’s Richmond’s turn to showcase what our local musicians can really bring to the table. This year, The Southern Belles, Tin Can Fish Band, The Working Effective, and Imaginay Sons will bring their best to Capital Ale House to hopefully share the stage with the other musicians.

The Southern Belles, who recently released their second ablum Close to Sunrise are stoked to participate in the contest. Check out a profile on them here.

“Being a part of this festival is so important to us because it’s the only one of it’s size and caliber that takes place in our great Commonwealth, which we’re so proud of, not to mention that most if not all of our greatest influences are actually playing or have played this event in the past,” The Southern Belles said in an email.

“In a way, it’s our responsibility- and privilege- to show the masses travelling in that we’re working really hard at creating the next wave of great music right here in Virginia. We also want to be there to represent our fans in Richmond and beyond who have so much spirit and have supported us endlessly over the last few years. This would be a reward for all that hard work not just from us, but from the fans as well.”

Guitarist and lead vocalist Justin Storer of folk-rock band The Working Effective said via email he and the rest of the band are excited no matter what the outcome of the competition.

“We want to be part of the festival because it’s an opportunity to be part of something great,” Storer said. “Even if we lose next Friday, we are excited to share the Capital Ale stage with some great local talent. And If we win, we share a much larger stage alongside incredible international talent.

“The thing that makes the Working Effective stand out is the strength of our melodies and a totally engaging stage show that spans emotional high and lows, from serious to funny. Whether we win or lose, we guarantee that folks will walk away humming our tunes.”

Folk-rock roots group The Tin Can Fish Band is also competing in the battle of the bands for Lockn. Steve Fisher said their a good candidate for the festival because their sound could resonate with many of the attendees.

“Tin Can Fish Band is definitely jazzed to be in the rockn to lockn competition with the other fine Richmond bands,” Fisher said. W”e have been together about 3 years and everyone in the band is a veteran of the local scene. TCFB’s energetic folk rock and roots is a good fit for Lockn because our upbeat material and blend of acoustic and electric instruments will appeal to a wide range of festival goers. With all the great energy and positive stuff happening in Richmond now we would be honored to represent our city at Lockn!”

Kyle Hermann of rock-band Imaginary Sons had some interesting reasons for my why the should be selected for the Lockn Festival as well.

“The very fate of rock n roll depends on our acceptance on to the Lockn Festival stage. Our interplanetary group of chosen heroes were hand selected by the Jedi ghost of Chuck Berry, The God Father of Rock n Roll, to fulfill the prophecy and destroy the evil computers that threaten to obliterate music in the galaxy,” said Hermann. “Join us in our fight to save rock n roll and send Imaginary Sons to Lockn Festival. The life and music we save might just be your own!”