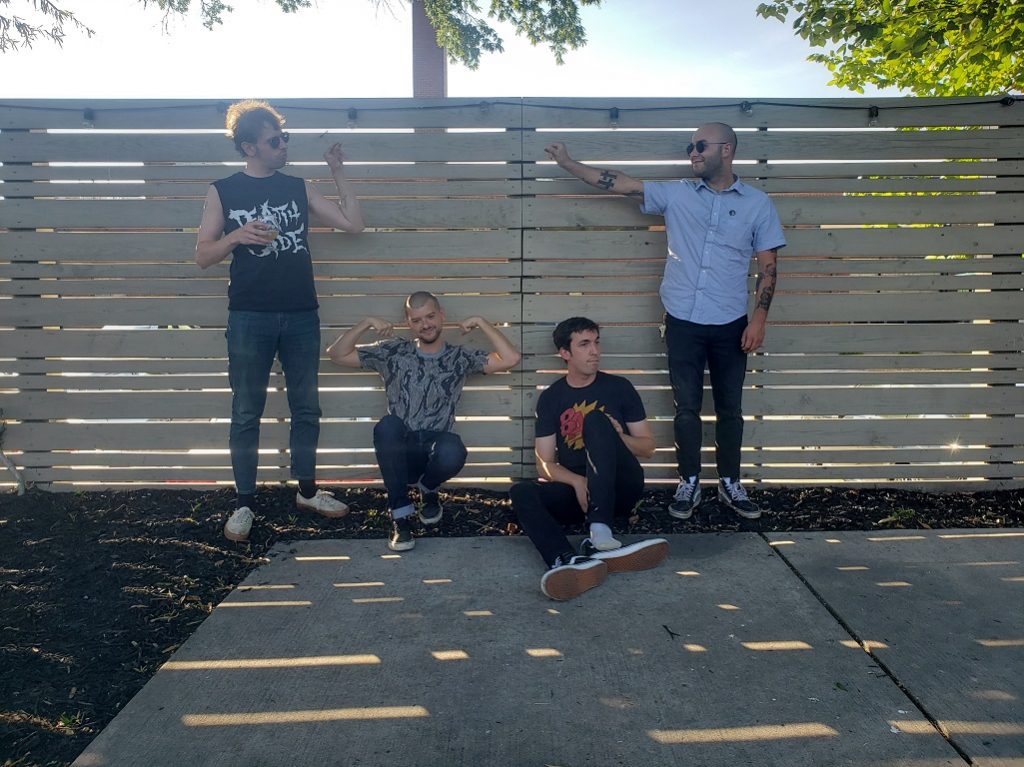 For Richmond punk rockers Cement Shoes, letting things get out of control is a big part of the fun.

There is absolutely no limit to the experiences local hardcore punk band Cement Shoes are offering with their music and concerts. Too, the Shoes’ most recent release, showcases the haphazard nature of the band’s creative style — a style they make work very well.

“The writing process was interesting, because I’m about 95% certain the lyrics are totally made up for the record,” said the band’s bassist, Sam. “We just hang out every Monday, drink a bunch of beer and make loud noises; that’s the music.”

“We get so stupid in the practice space, and whatever we can remember becomes a song,” said Brandon, guitarist for the Shoes.

For the members with instruments — Sam, Brandon, and Hunter on drums — the pressure is on to play some semblance of the songs that were written. However, for the Shoes’ singer/growler, Trevor, the only goal is to make words happen in some order, at some point during a set.

“I don’t have to worry too much about what to say when we play, so I’m just gonna get plastered before each show,” said Trevor.

“We need to initiate Trevor soon,” said Sam on Trevor’s recent switch from drums to vocals. “Huff gas and watch wrestling, then we can write down whatever comes to mind and we’ll actually have lyrics. I don’t know why this problem only ever happens within Cement Shoes.”

Former member John is the voice on the recently recorded LP, but is no longer with the band.

“John seemed to have fun illustrating the whole lack of lyrics; he wouldn’t send anybody the lyrics,” said Sam.

“He did show up and sing over the LP, but we think he just made shit up the whole time,” said Brandon. “There’s key words in each song but then… ‘crucified’ is a big word he used for no reason.”

“Have you ever read the lyrics to a Bjork song?” asked Sam. “Nobody has, and that’s the beauty of it. She can do whatever she wants.”

The loose format of their music doesn’t lend itself to any real structure and avoids connecting with the lyrics, but that doesn’t stop Cement Shoes from creating music that shifts people. The instrumentals alone make the music worthwhile, and will get you head banging and moshing quicker than you’d ever be able to pick up on the ever-changing lyrics.

The sheer freedom in their style gives them regular opportunities to get creative, and with the amount of creative time they have, things tend to get out of line fast — in true punk fashion. But they do have a plan for how they’ll resolve all this.

“We’re gonna take it as far as we can, then go into recovery and become a straight-edge band,” said Sam.

This random approach doesn’t just affect the music — the Shoes have shared the stage with bands they never would have dreamed up, which only adds to the whole erratic experience. And by the way, we’re not talking about famous bands.

“GOOLS! Little green ghouls! A bunch of middle schoolers from New Orleans,” said Brandon, reminiscing on the wild group that played before them at a show a year or so back. “They played for an hour and a half with roller skates on.”

Have they ever considered incorporating roller skates into their own sets?

“All the time,” replied Trevor. “That’s all I ever think about honestly.”

While the craziest shows have happened on tour, the Shoes were happy to reflect on their favorite Richmond spots as well.

“It looks like Rob Zombie took a shit and that’s what came out,” replied Trevor.

As for Brandon’s favorite local spot? “There’s a baby goat at Maymont that yells when you have food, but if you don’t feed him for a minute it’s just loud. That’s my favorite place,” said the guitarist.

Due to the impermanent nature of the music, the band, and the entire Cement Shoes experience, the foursome is well aware that things can easily go downhill… and they’re a-okay with that.

“Why go to a punk show if you can just make the most hilarious meme in the world on Adderall? It’s the future of punk,” said Brandon. “No one is going to try and write another Anna Karenina again if you can make an image with a byline that says everything you could say in a novel.”

“I would quit the band,” said Trevor. “If someone said, ‘you can have a life supply of Adderall or continue to be in this band,’ I would take the script. I would be so productive. Do all the memes.”

All that being said, the Shoes aren’t actually planning to stop playing music anytime soon. They’re looking forward to shows both stateside and overseas. In fact, they’ll be making their first trip out of the country soon. Sam explains.

“I had known these guys at a shop called Lulu’s in Melbourne, [Australia], and every year they throw a festival called Maggot Fest,” said Sam. “For whatever reason, they really liked our band when our single came out.”

The band is really excited about their first Australia trip — but not for the reasons you’d think. Most notably, they’re excited to meet some “buff ass kangaroos,” “get eaten by sharks,” and hang out with “what’re they called… koala bears.”

Before they leave for the land down under in November, Cement Shoes will be playing shows around Richmond in promotion of their new album, which is out now on vinyl, CD, and digital from Feel It Records. This Saturday, June 27th, at 9 p.m. they will be hosting a record release show at their favorite juggalo vape bar, Wonderland, along with New York bands Warthog and L.O.T.I.O.N., and fellow Richmonders Serqet. For more info, click here. Come out and enjoy a completely new and exciting experience. And expect plenty more shows in the near future.