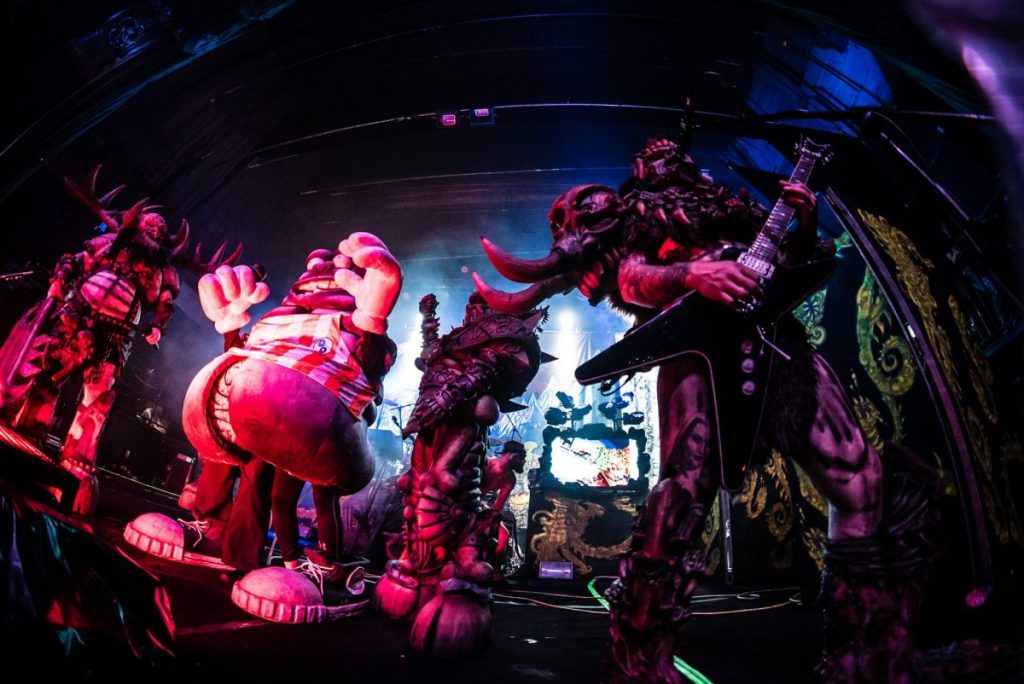 Most people are not doing well during the COVID-19 pandemic, but the members of GWAR are not most people. The intergalactic metal gods have taken the pandemic in stride. Blothar took time out of his day of conquest to talk about GWAR’s plan for their upcoming drive-in shows.

GWAR, the intergalactic alien metal band that has made Richmond its home for over three decades, has been doing well during the COVID-19 pandemic — at least according to lead vocalist Blothar.

“We’re doing well, but that’s because humanity is doing very poorly.” Blothar said. “So, naturally, it’s a time of celebration and cheer for GWAR. I mean, we’re wondering if there’s going to be any of you left by the time that this is all through.”

Blothar also said that the members of GWAR are isolating themselves from one another, but not because of the pandemic. “We don’t really like to be around each other anyway,” he said, “so being forced to work remotely has certainly had its perks.”

Blothar has recently relocated from GWAR’s Antarctic fortress to Sarasota, Florida. “It’s a fun time with the aging rock stars,” he said. “I hang out with Brian Johnson From AC/DC. We have a good time doing karaoke with the guys from Obituary.”

But isolation can be boring, so GWAR is holding two drive-in shows at The Diamond parking lot in Richmond on Saturday, Oct. 10th. According to Blothar, this is the only GWAR live show they’re doing in 2020. The first show sold out quickly, but at the time of writing this article, tickets are still available for purchase for the 5:45 p.m. show.

There are three different ticket tiers available for purchase based on the proximity of the stage. A single ticket grants access to the concert for one vehicle, which can have up to four passengers. Vehicles will be parked in a socially-distanced manner, and if concert goers would like, they’re invited to sit directly adjacent to their vehicles in lawn chairs or blankets. Safety guidelines will be strictly enforced, and patrons will not be allowed to leave their adjacent vehicle area unless using the restroom, where they must wear a mask.

Despite the different environment of the concert, GWAR is confident fans will have a great time.

“What fans are going to see is a GWAR show,” Blothar said. “A classic GWAR show, with all of the trappings. It’s just that they’ll have to use their windshield washer fluid a lot… I think it’s going to be a very different experience.”

Blothar did say that fans should also expect new jokes and new context. “It’s going to be topical,” he said. “Topical like an ointment. Both in its meaningful, and you can spread it around.”

GWAR looks forward to the drive-in shows. “It’s going to be great for us because cars are ultimately a lot better looking than people,” said Blothar. “I think it’s going to be a really fun way to see GWAR… And we’ve definitely got some things planned to make it more fun, given the particular circumstance.”

Even though that particular circumstance may not be the best, GWAR is excited for the potential to do something different than they have ever done. “This is just an interesting sort of arrangement of a canvas that we haven’t dealt with before,” Blothar said.

GWAR is also excited to be working with The Broadberry Entertainment Group. “It’s taking a while for the [music] industry to recalibrate under these conditions,” Blothar said. “And Richmond is actually pretty fortunate to have a creative promoter in that town that will work to facilitate these types of events.” Blothar also said that things are being done and discussed about the potential of future shows, but because of the difficulty in recalibration across the world, things have been difficult.

However, according to Blothar, there will be a GWAR live-stream event. He couldn’t give specific details, though. “Let’s just say that at some time in the very near future, we’ll be doing a very special live stream event which is going to be very exciting,” Blothar explained.

As for the drive-in shows, they are a special event for people to go see GWAR live, something that Blothar thinks is a necessity. “GWAR is a live entity,” he said. “We’re something that you need to see live in order to appreciate.”

What’s more, this event will be a bit of a rarity — GWAR isn’t planning on doing another show like this in Richmond anytime soon. “We may be doing more socially distant shows in different locations, but this is a special event.”

More than ever, it’s become increasingly important to support local musicians. As Blothar pointed out, the situation today has made it a lot harder for people to make a living in music. “There’s a lot of musicians that you respect and admire who are making good music and making albums, but they’re working people that are out there trying hard,” he said.

Blothar also noted that the COVID-19 pandemic has created a different sort of problem in the music industry: People are leaving. Musicians aren’t able to play shows at venues, but at the same time, people who work in the music industry who are not musicians themselves are looking for work in other avenues.

“It’s very sad because what you’re seeing is an exodus of talent in the industry,” said Blothar. “The people who run sound… These are usually pretty qualified engineers who could work in another field.”

Blothar said that shows like the ones they’re planning at the Diamond are the sort of thing that helps local musicians earn money during these times. “And I know that sounds ridiculous when people think about how much they just paid for a Rolling Stones ticket,” he said. “But not everybody is The Rolling Stones.”

GWAR is definitely not the Rolling Stones.

Tickets for the 5:45 PM show are still available, and prices per car range from $140 to VIP Spew Row tickets (“Your car will be spewed!” the ordering page warns. Sounds good to us), which are available for $199.95 per car. Place your orders at Etix.