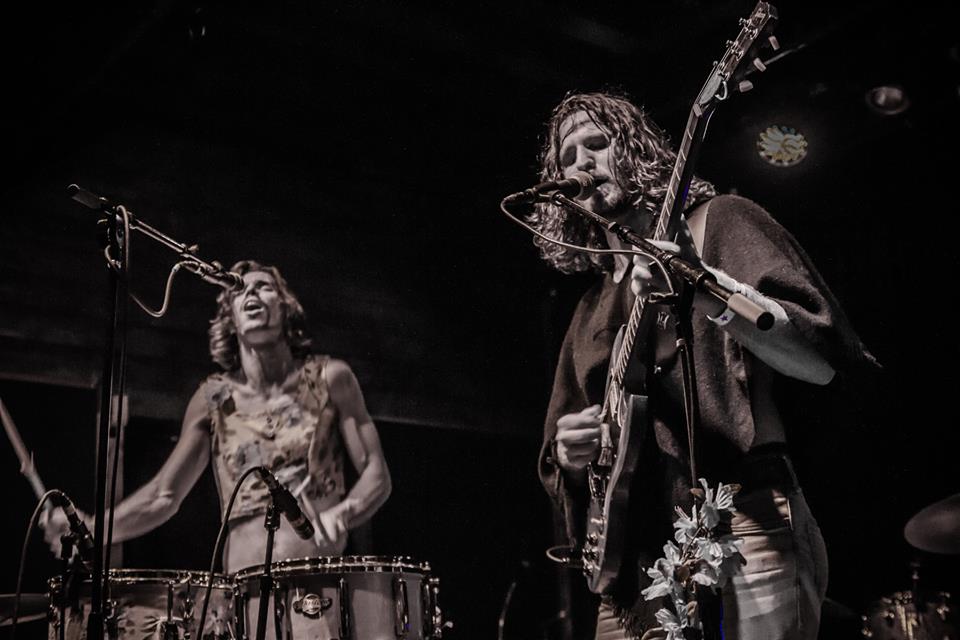 Illiterate Light, the duo of guitarist/vocalist Jeff Gorman and drummer/back-up vocalist Jake Cochran,  released their new EP Sweet Beast on January 18. For the fruit of over a year’s worth of work, Sweet Beast showcases just how dynamic, lush, and expansive a sound that a group made up of only two men can make.

“Sweet Beast,” the EP’s title track, deals with the sense of self both Gorman and Cochran have been grappling with since they became friends back in 2010.

“In one way it’s the process of waking up, and in a certain sense getting in touch with your highest self, or your best self,” said Gorman. “The verses represent the way our ego tends to operate, and the chorus represents this more free version of yourself. On a day to day basis we flow back and forth through our restricted ego and that higher self.”

“Sweet Beast” was written in only 30 minutes, and was the last song written for the EP.

“We didn’t sit down and try to perfect it a whole lot,” said Gorman. “It was just really raw, and almost animalistic in that way.”

Acknowledging their animal side is familiar to the duo. Years back they were faced with a decision: to stay working full time as organic farmers, which they had done for about three years in Harrisonburg, only playing music on the weekends; or to go out and live their dreams of touring as full-time musicians. They chose the latter, and as they tour now everywhere from Vermont to Florida, even heading to SXSW this summer, they have an appreciation for the cultural and idea-sharing function their band serves for those they encounter.

“One of our mentors told us, ‘In a forest there’s trees and shrubbery, things that are rooted, and then there are animals who can go up to the top of the mountain to hunt and look for food. As they eat they also poop, and when the rains come it pushed those nutrients from the feces back down the mountain, which leads to healthier soil. Right now you guys are animals, out there spreading ideas and art and connecting the culture. If you’re gonna go out there and do this you gotta do it to the fullest,’” said Gorman. “Our ecological function right now is to be out and moving, and there will still be times when we will be rooted. Right now we’re animals, and soon again we’ll be a tree.”

What lead them to become the animals they are today was a long road of pushing themselves into all of the exciting opportunities they could get their hands on. They’ve learned a lot as part of that process. Before settling into their rhythm of being full-time musicians, they worked together as organic farmers, spending time at Harrisonburg’s Our Community Place. Cochran also learned how to build tiny houses with his wife, while Gorman worked as a substitute teacher.

“It was more School of Rock than anything else. I would bring in posters and get kids at Harrisonburg High School to write the information down,” said Gorman. “I definitely was the butt end of some high schooler’s jokes. I have long hair and a beard, so sometimes they called me Mr. Jesus.”

While they started working together as musicians in college at JMU, places like Our Community Place shifted the duo’s focus to what the world had for them beyond campus. While spending time there, the duo found encouragement to step away from what may have been expected of them post-graduation and truly go after what they wanted. They ended up on a very unconventional path as they shifted from being a college group to being a professional band.

These days, the duo gives back by talking to students, who are looking to start their own music careers, about their experiences. A question they often get is how they managed to shift outside of the university setting and begin making their mark in other non-local communities.

“When we started, we would hit up a band from a different city and say, ‘Hey, so we have a pretty good buzz down here in Harrisonburg, if you guys come down here you’re guaranteed to play for 50 to 75 people. We can host you for a night and make you breakfast, and we’ll do a house show and pass the basket, make sure you guys get at least $100,’” said Gorman. “We looked to each city we wanted to go to, and rather than going there first, we invited a band from that city to our city and threw a good show for them. We were doing a show trade, basically, where we made sure to put in the effort first.”

After doing their own heavy lifting, managing their careers and performances, paying their dues playing covers at bars and weddings, and branching out into the various Virginia scenes, Illiterate Light has found its way into a blossom. Now with professional management, the duo is focused on touring, spreading their music as far as they can, impacting the people they meet in positive ways, and creating new music.

Later this year they also expect to release a full length album, the title and release date of which have not yet been decided. However, the album has been recorded in full at Montrose in Richmond, a studio that Illiterate Light has been able to call home.

As the year continues, Illiterate Light will be touring as much as possible, playing shows in their hometown, Harrisonburg, where the band was born; one of their favorite cities, Richmond, where the band grew up; and beyond. But despite their current wide-ranging ambitions, they haven’t forgotten the ideas that inspired them in their first days of being a full-time band.

“It all comes back to a desire to have a full and meaningful life, which sometimes isn’t always available in mainstream society,” said Gorman. “How can we live in a way that is fulfilling for us, and is positive and teachable for the world at large and our immediate community.”