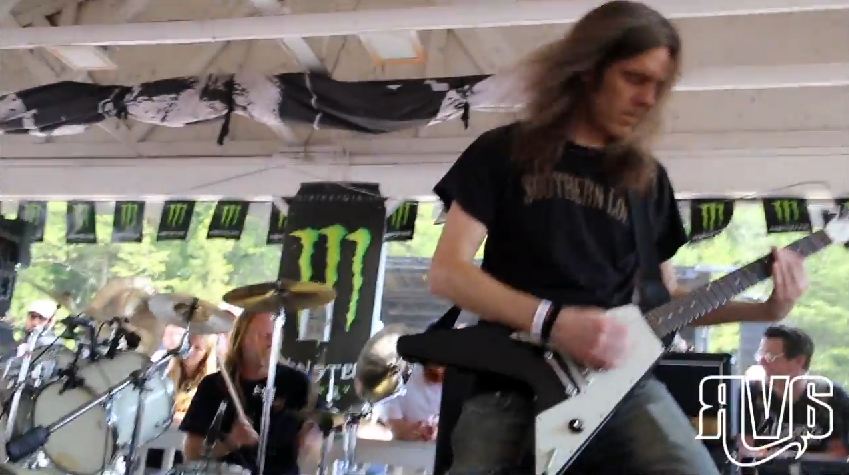 Richmond’s metal scene is steeped heavy in hard riffs, complicated time-changes, and some of the blackest metal you can find this side of a frozen Icelandic tundra. The fellas from Loincloth are just such an example of that – hard, fast, precise, complex, and a thrill to catch live.

Richmond’s metal scene is steeped heavy in hard riffs, complicated time-changes, and some of the blackest metal you can find this side of a frozen Icelandic tundra. The fellas from Loincloth are just such an example of that – hard, fast, precise, complex, and a thrill to catch live.


Watching these four men (Steve Shelton – drums, Tannon Penland – guitar, Tomas Phillips – Bass, Craig Hilton – Guitar) work their magic at the GWAR-B-Q last month was a rare chance to see their epic/thunderous jamz in action. For as long as they’ve been playing together (since 2000) they have only a few releases under their belt. Band members live both here in RVA and in Raliegh, NC. The physical limitations lead to a barrier to production, but it hasn’t stopped these hard working metal gods from touring and having their actual releases make serious impacts.

Pitchfork gave Loincloth’s last release, 2012’s Iron Balls of Steel, a 7.9 and called some of the 12 tracks “brutal brain-scramblers” while “others strive for and achieve an actual emotional arc, an epic narrative sweep that places Iron Balls in the company of recent work by wordless prog-metal titans Dysrhythmia.”

Loincloth’s few releases and rare Richmond performance only added to the magic which was GWARBQ – and we got the chance to sit down with guitarist Tannon Penland after their set. Have a look at the interview below.

Does the distance pose a issue for you guys?

Considerable. Yes. It makes things very slow. And the nature of the music is pretty odd, so in order to really stay up on it you have to be in a room together to do it. So yeah, the distance does in fact make it a bit long-winded.

So do you guys travel to Raleigh or Richmond typically for practice?

I go to Raleigh normally.

Are there specific venues in Raleigh you guys like to play at?

We just recently played at a place called Kings which is quite a nice place. No, we don’t play out much. We’ve done one small tour with the band Sunn O))), and did a couple shows with a band from New York called Dysrhythmia. After this we’re gonna go to Barcelona to the Day of Doom with Saint Vitus, The Skull, and Orange Goblin. That’s gonna be a lot of fun.

We’re basically working on a record, and perhaps when we’re finished with that we’re gonna try to get to Europe or try to get Asia, something along those lines. And we’ll do some shows here in the States, too.

Awesome. You were talking about how you were supposed to play Gwar-B-Q last year, but there were some issues with–

There was. I was in a car accident that actually genuinely fucked me up. I wound up with a couple of breaks in my hand and my sternum was broken and my ribs, and I had lung contusion. Wound up in a trauma center and I’ve really spent the last year recovering from that. Couple of surgeries later on my hand. It’s working. I still have a lot of PTSD from it, so I can’t really ride in a car, and that’s been contributing to why we haven’t been able to do shows.

Yeah, tour must be an issue with–

It is right now, and I’m actually seeking some help with it. So I’m trying to find the program to help me figure out what tools I need in my tool box to get to the other side of it.

Yeah, absolutely. So you guys just released your first full album in 2012.

Couple of years ago, yeah. It’s on Southern Lord Records. It’s one of my favorite labels run by a guy that’s in one of the heaviest bands in the world named Sunn O))). I just think they’re glorious. It’s a real honor to be on the label and it’s been a real honor to get to work with them.

Cool. So what can we expect for the new album? Is it gonna be a full or an EP?

Well, it’ll be a shorter record, and I feel like the tracks we’ve recorded thus far feel a bit different in the sense that they’re not quite as difficult.

Okay. In what way?

In the way that there’s still plenty of time signatures that are involved in it, but they shift in longer lines. They move a bit differently; they breathe a bit larger in these new tracks. They’re pretty heavy. A bit slower, as well.

Awesome. Are there any planned Richmond shows after this one?

Nope. Nope, the only thing we have planned is Barcelona.

Barcelona should be awesome.

So do you guys find any influence from other Richmond bands? Do you know any of the other bands on the GWAR-B-Q bill?

Oh, sure. Absolutely. I grew up with so many people that are here today. For example, Brad, who’s in GWAR, and Mike. We played together years ago in a band called KÖSZÖNÖM. There were some folks that were standing behind us… One gentleman, he was in Slianglaos, which is truly one of my favorite Richmond bands of all time. Couple of other guys from Hex Machine, which is a current Richmond band. They’re fantastic.

Kepone was on the stage as we were playing. You can’t beat them. They’re simply a phenomenal, phenomenal band. And yeah, there is something that’s in Loincloth that is indicative of Richmond. Just odd time signatures, exclamation points that are, more often than not, not a lot of fun for a lot of audiences. But the people around dig it, and so do I. I always have. So yeah, I love the Richmond music scene. We could talk about that forever.

Yeah, certainly. How do you feel about the metal scene in particular? Are you excited about where it’s going?

Yeah. You know, in a lot of ways– for example, Dave Witte. The Glorious Gone played today, and they were absolutely phenomenal. Now granted, they’re Jersey guys, part of a different scene. A really vicious scene that I love exploring. But I think Dave, along with a lot of other people, have implemented something very purely metal that is not necessarily indicative of the Richmond sound. And it’s a really great thing, because you start to see the cross-breeding that happens and how forms influence forms. And currently, yeah, I think there are some people attempting some really interesting stuff and some heavy stuff, and it’s not necessarily purely metal, you know? It’s based in heavy.

Yeah, I feel a lot of the Richmond bands have a lot of outer influence. They kind of mix it up a bit. So you mentioned you know some of the guys from GWAR. Do you have any good Dave Brockie stories?

Well, I grew up around Dave. I grew up going to shows around Dave. And you know, on a day like this, it’s wonderful to be here and simply celebrate his being. I think his achievements are wonderful, and I could tell a lot of bad jokes. I think he would appreciate that. I think this a great celebration of his legacy. What happened yesterday was simply beautiful. It’s a sad day for a lot of folks but it’s a truly empowering one, because you see the legacy that he created will endure and GWAR will endure. And I’m very, very excited about, because I love those guys. I think the world wants GWAR to continue and I’m super happy to see that it’s gonna. Beefcake the Mighty is taking over on vocals. You could just not get a better choice. So the current state, as sad as it is, is still very hopeful and wonderful.

So you must be very excited about GWARBar as well, then.

Oh, yeah. Yeah, that’s gonna be phenomenal. That’s something that’s been in the making for a long time, and I’m super psyched that it’s actually going to happen.

What are you most excited about with GWARBar?

I think I’m most excited right now over the thought of those individuals channeling their massive, creative beings into something else for a moment, and allowing that space to perhaps grieve and to be creative. And everybody in that organization has a lot to say in a lot of areas, and I imagine in opening a restaurant they will, too. I’m just excited to what it becomes, what their creative minds have put together.