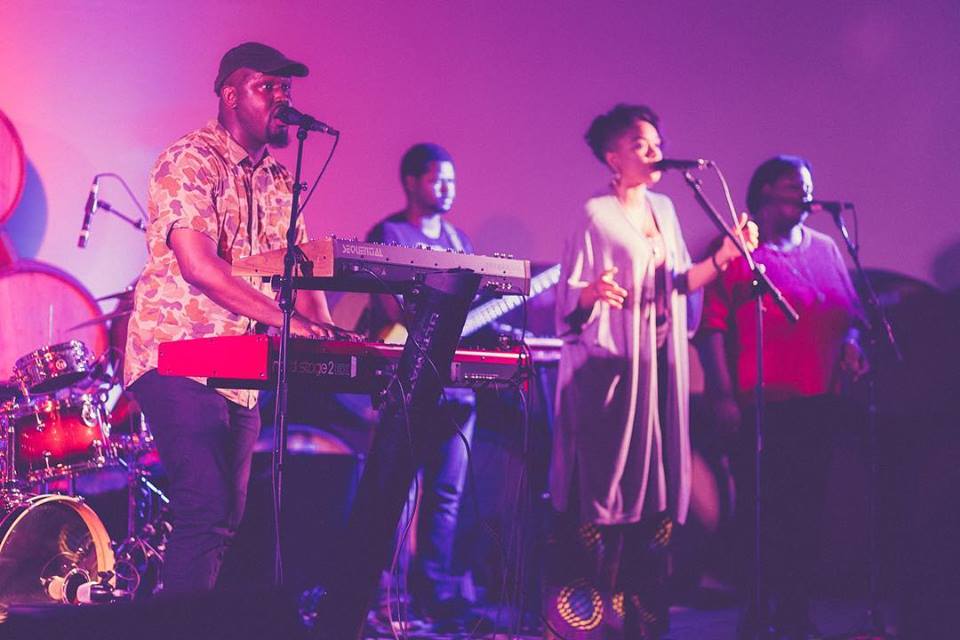 From jazz and blues to funk and soul, the low-lit clubs of Richmond incubate a rich musical flavor that’s all our own. And the musicians at the heart of this sound are what make it all possible.

Richmond’s best-kept secret is its sound.

On the surface, the city is known for its craft beer, breweries, and historical landmarks. But if you take a look below the surface, you’ll find a vibrant collective of RVA musicians throwing down in our own backyard.

You can slip down the rabbit hole at Vagabond for Jazz Wednesdays or light up the Dark Room for Treat Yourself Tuesdays. At the heart of all of these events, you’ll find an authentic RVA sound — a sound created by the moonlighting musicians of Richmond.

You can try to track them down on Facebook or stalk an #RVA tag on IG, but there’s no need — you’ll likely see the same faces around town.

From performing onstage to supporting one another in the crowd, these artists are present at all times, seamlessly slipping in and out of each other’s bands.

“We care about what we do, and we work really hard,” says Calvin Brown, bandleader of Calvin Presents:.

Brown, a pianist and singer/songwriter, grew up in Richmond and has played all around the country. He points out his experiences working with the musicians in the Richmond area as “full of learning opportunities” and filled with “constant inspiration.”

“There’s not a lot of jealousy, and we’re all genuine friends,” Brown says. And this camaraderie helps fuel the chemistry of these local musicians.

Chemistry is always something a band should be working towards. While it’s a reachable goal, it doesn’t happen overnight. So when a substitution arrives in an already-complex situation, things can get a tad awkward.

Take bassist Brandon Lane, for example. He’s fresh off a Tokyo tour in which he filled in as the bassist for NYC-based Afro-Cuban Jazz group Cu-bop.

Lane is a VCU graduate who’s been playing in the city of Richmond for six years. “There’s always an adjustment,” he says of filling in for another musician. “But overall, it’s a smooth experience.”

“This was my second time playing with them ever,” Lane, who traveled 48hrs to reach the Tokyo gig, says of performing with Cu-bop. “There was no rehearsal before traveling out there. I had to build these qualities onstage every night, and it was a little rough on my part, but we were gelling by the end.”

As a sideman and bandleader, you can catch Lane in a multitude of trios and quartets around town.

“For the most part, switching in and out of bands, for me, is pretty smooth if I already know the personnel, how they play, and the music,” he says. “When any of those three aren’t in alignment, it can be a bit of an adjustment.”

Similarly, Brown prefers to work with musicians he has a rapport with.

“I’ll never take a gig without Josh [McCormick],” Brown says, referring to a local drummer who plays in several bands with him.

In addition to familiarity, something Brown preaches is an artist’s familiarity with the band’s music.

“A great sub is someone who comes prepared. It shows professionalism,” he says. “It’s not all about talent. There are some talented people who I would never call.”

Brown says the combination of talent, professionalism, and a strong work ethic are attributes found in the RVA community that make substitutions easy.

“As a sideman, you should be holding yourself to that standard,” he says.

Someone who comes prepared by knowing the band’s music can save the group a great deal of time. This can also benefit the sub, as by being more comfortable and familiar with the music, they can infuse their own vibes into the band’s style and create something new, taking the group to new highs.

But with Richmond music, it always comes back to the sound.

“This place has a sound,” Brown exclaims, referencing the fact that celebrated R&B singer D’Angelo comes from the Richmond area. “We’ve all kind of listened to the same thing and absorbed the same thing — and we share a love for each other.”

In spite of everything that could go wrong, these musicians never seem to miss a beat. The seamlessness of the musicians we see before our eyes comes from the invisible stitches of support that knit the RVA music community together.