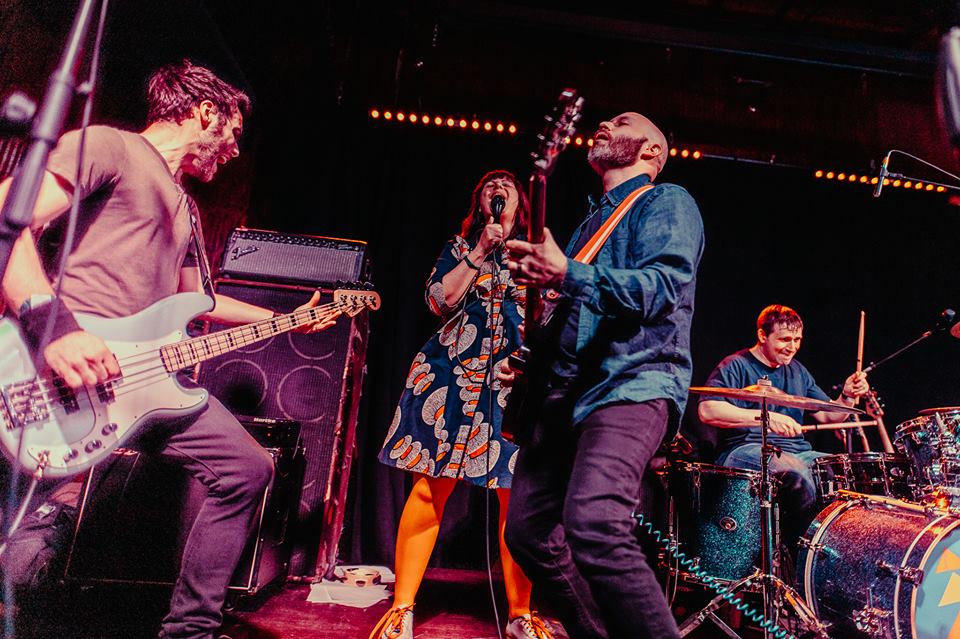 On their new lathe-cut single, “Teenage Waistline,” Positive No use their music to bring a message of hopeful anger.

“Music is so much more than music,” said Tracy Wilson, vocalist of Richmond indie rock band Positive No. This sentiment rings especially true after listening to the band’s most recent single, “Teenage Waistline.”

“Teenage Waistline” opens with a fast, driving beat and bassline that pull listeners into the song right away. A simple yet impactful guitar part cuts into the mix, helping to pave the way toward a delightfully melodic chorus that matches the intensity and energy of the song.

Wilson drew inspiration for the single from Wally Hope, a British counterculture icon who organized free cultural festivals in the 1970s. Some speculate that Hope’s untimely death in 1975 was the result of a murder conducted by the UK government, an attempt to silence what Wilson calls a “delightful weirdo and activist.”

The death of Hope was one of the reasons as to why the legendarily challenging and confrontational English punk band Crass, known for their multiple run-ins with the UK government, formed in 1977. “In many ways Crass is the ultimate Positive No,” Wilson said. “They were angry, but never without hope.” With “Teenage Waistline,” Positive No aims to celebrate the ideals of Wally Hope, and the importance of staying positive in the wake of tragedy.

Wilson delivers vocals on the single with power and grace. On “Teenage Waistline,” Wilson brings emotion to the song right from the start, crying out “I hate it, I hate it.” The lyrics “are meant to tell a thoughtful story, while making you think a bit about their meaning,” Close said.

“Thanksgiving,” the B-side of the single, offers much of the same atmosphere featured on “Teenage Waistline.” Guitarist Kenny Close, proving that less is more, offers catchy riffs that propel the song forward in an upbeat direction.

Sound aside, the single is notable in that it is being released on lathe-cut vinyl. Lathe-cut records are different from other types of vinyl in that during production, the cutting needle is dropped freehanded, rather than by a machine. Generally done in small quantities (Positive No will be releasing 50), lathe-cut vinyl gives fans the chance to own a small piece of the band’s history.

Close considers the lathe-cut records to be a win/win for the band and their label, Dromedary Records. “They didn’t have to invest a ton of cash,” he said. “A smaller run ensures we can move the product without the stresses of booking a ton of shows to support.”

Indeed, the lathe-cut vinyl version of “Teenage Waistline” has already sold out; however, the EP is still available in digital form from Dromedary Records, or from Positive No’s Bandcamp page.

Since RVAMag last spoke to Positive No in 2017, they’ve added Coldon Martin, formerly of local alternative band Lightfields, on bass, and has spent some time making edits to their existing songs, in order to make them most effective in live settings. With a solid lineup in place for one of the first times in their existence, they’ve also embarked on some bigger supporting tours, which Close says has helped them to become a “tighter and more focused band.”

Despite being a band for nearly seven years, Positive No retain their original songwriting process. “Our songwriting process has always been rooted with Tracy and myself presenting ideas to the band that we all flesh out together,” Close said.

Looking to the future, Positive No plans to head to the studio for their next release in September. They’re grateful for their ability to continue putting out music, saying that they never take for granted the people that help to make it happen.

“We are music superfans first and foremost,” Wilson and Close said. With “Teenage Waistline,” Positive No continues to share their refreshingly positive music with the world.

VA Shows You Must See This Week: February 26 – March 3

VA Shows You Must See This Week: February 26 – March 3