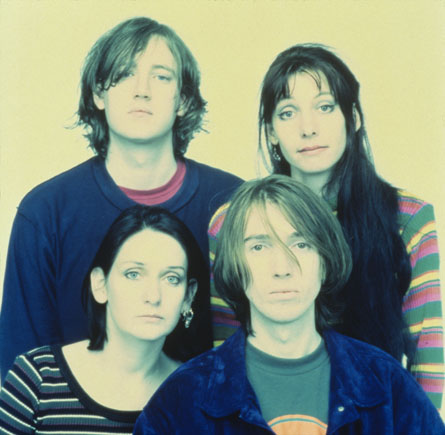 My Bloody Valentine are almost impossible to imagine as a functioning band of living human beings.

My Bloody Valentine are almost impossible to imagine as a functioning band of living human beings. They are one of the most mythologized and exalted bands of the past two decades regardless of the fact that they spent the majority of that time inactive. This unique scenario provided the backdrop for their sold out show at The National this past Thursday night.

It was immediately clear what the audience was in for even before entering the venue by way of the colorful earplugs that were being handed out to each person upon entrance. That, coupled with the signs warning of intense volume and strobes, built the tension to an almost unbearable high. By the time I made my way down to the front of the venue and counted each of the eleven amplifiers spread across the stage I realized that the only real competition for this show would be some impeccable vision that my fifteen year-old self had envisioned in a vacuum. I can only imagine that it was the same for the rest of the audience, many of which would have been kindergarten or grade school during their last stops in the United States.

Kurt Heasley of the band Lilys opened the show, playing a twelve string acoustic guitar and adding some much needed levity to the proceedings, which were in danger of lapsing into hushed religious reverence. I got the distinct impression that a few people weren’t happy with the set, but I don’t think anything really would have satisfied them at that point anyhow. The set was as fun and breezy as the environment would allow, and I strongly recommend the Lilys catalog to anyone even remotely interested in idiosyncratic pop music.

And then we waited. I found out later that the band had spent two days working on the sound in the venue, which is understandable given their notorious perfectionism and the continuing sound issues at the National. Even so, everything was tweaked and prodded before the band walked onstage and opened with the gauzy “I Only Said” off of Loveless. It didn’t sound dated, it didn’t sound awkward, it didn’t sound like a cash-in. It sounded like fucking My Bloody Valentine. More importantly, it FELT like My Bloody Valentine. I had the privilege of standing at the right side of the stage and feeling every note and rhythmic shift through my entire body. I’ve seen plenty of “loud” bands and certainly read quite a few show reviews from their shows past and present, but nothing quite prepares you for the feeling of your teeth involuntarily chattering inside of your mouth during a song like “Cigarette In Your Bed.”

The band continued on through their set amid a psychedelic wash of color behind them and strobes galore. The vocals were barely distinguishable, as they are on record, but no one seemed to mind. As for the set, the band dipped liberally into Loveless, Isn’t Anything, and the You Made Me Realise EP. Songs like “Thorn” and “Nothing Much to Lose” from their pre-Loveless days revealed the band as humans playing rock songs as opposed to ghost icons playing perfect reproductions of their classic record.

All of this was just a big tease for the final song, “You Made Me Realise”, which contained the notorious “Holocaust” section consisting of twenty minutes of unbridled noise. I actually have no idea how long it was. I’ve talked to dozens of people who have experienced this, and nothing I can say equates to how it feels/sounds/etc. At the risk of sounding exactly like everyone else, I can only liken it to being behind a jet engine taking off. Absolutely fucking transcendent, and certainly the loudest thing I can ever hope to experience. Time distorted itself, ghost notes arrived and dissipated, and there was literally a current of wind coming from the stage over the audience. In the end, this is why I will always love this band. They barrel through loud, simple pop songs, and then physically assault the audience with noise. If people were disappointed, I can only imagine it being a fault of their own expectations. I went to see My Bloody Valentine and I got My Bloody Valentine.