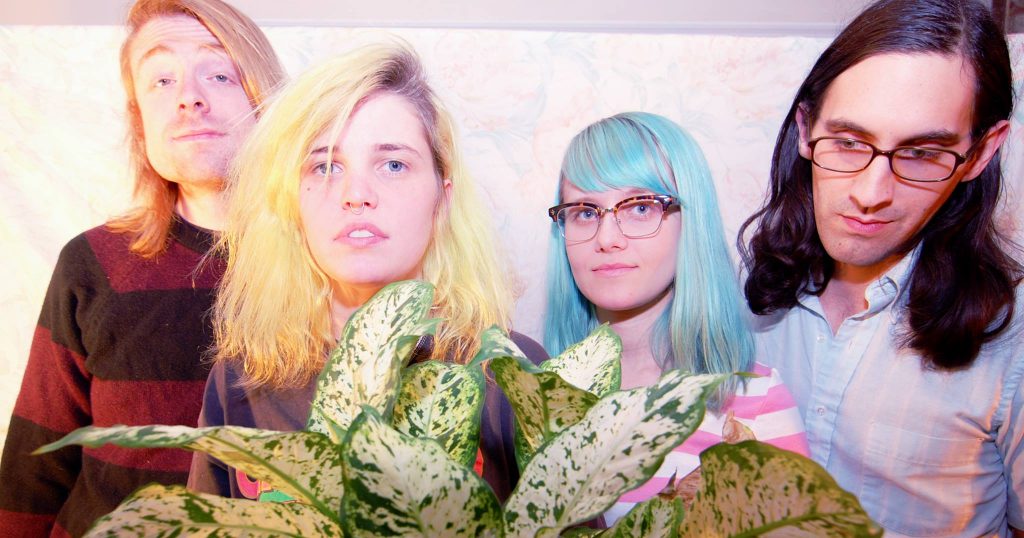 For alt-rock purists, the past few years must surely feel like heaven.

For alt-rock purists, the past few years must surely feel like heaven. The surplus of bands and artists furthering the all-encompassing yet atypical genre grows by the day, each with their own unique interpretation of that 90s hazy sound and fusty production.

Despite each band’s intrinsic value, it can be hard to differentiate all the new bands and artists marketed with the 90s revival tag, but there are still many that quickly rise to the top thanks to sharp songwriting and endearing energy.

Columbus quartet All Dogs is just one of these and with their own unique awareness of the situation, their cementing their own central place within that scene that’s not going anywhere anytime soon.

Nostalgia isn’t a weird concept to understand, but the way it has completely taken over music and other forms of arts has to be considered strange. “It’s probably just how we cope with how weird our current time is,” All Dogs frontwoman Maryn Jones answered when asked about the resurgence of 90s music and nostalgia in general. It seems dismissive, but Jones is touching down on an issue most don’t want to talk about. Now, more than ever, we yearn for a better time. One could spend all day making various arguments for why that is, but the core fact is that people are generally not pleased with the condition of society in 2016. Most great art has always come in rebellion of a nearly-obsolete status quo and it seems it’s happening today too, even though the artists doing it now are using a pre-used brush as opposed to one they crafted themselves.

Is it a pre-used brush though? It’s a slippery slope to dismiss artists channeling a sound twenty years their senior, especially considering all “great” rock seemed to be capitalizing on past success. 60s rock was mostly built on 20s blues and 70s punk was mostly built on 60s garage rock, but no one’s ever seriously criticizing The Rolling Stones or The Ramones in that regard. As retro as All Dogs sound is, it’s also indicative of a time where music is wildly accessible and a time that’s the culmination of five decades of musical diversity. “We all come from a pre-dominantly punk scene and came up watching punk bands play, but all have a love for many other kinds of music,” Jones admitted and that’s what we have in abundance of in music today. Not everyone attacking a 90s sound, but bands with a distinct core being tugged and yanked on by all their other influences, whether consciously or not, until it settles in the catch-all genre of alternative rock.

Still, Jones did admit to us her admiration of the 90s, something she attributed to her childhood. She laughed about regularly daydreaming of All Dogs sounding more like the Smashing Pumpkins, but also spent time extolling the greatness of the 90s’ high number of “strong, inspiring women making music.” Some might say that number is even higher today with the likes of Courtney Barnett — someone how Jones quickly remarked was simply “amazing” — and Grimes making big waves while artists like Des Ark and Lady Lamb bubble under the surface. “I think feminism and women-centric movements are more in the collective consciousness these days, which is nice,” Jones detailed. “I have felt super supported and lifted up by other women through this whole process. That means a lot. As a side-note, I hesitate to say ‘female,’ because there are a lot of trans-folks and gender-non-conforming peeps also creating incredibly important and staggering music and art. It’s an exciting time to be an artist/listener.”

Listening to All Dogs makes that time all the more exciting. The band, who formed in 2012, released their first record Kicking Every Day in August of 2015 and features Jones’ amazing versatility on nearly every track, something that comes through artist emulation as well as dumb luck it seems. Her restrained vocals on tracks like “Flowers” and “Ophelia” provide a perfect example and contrast with their contemporaries’ preference for gutsy vocal parts as opposed to the more nuanced ones. “I have always been really into musicians’ voices that are held back a bit more when they’re singing,” she explained. “It’s really hard for me to do because I have a natural way of belting it out. I just like that ‘chill’ sound to their voices.”

The nuance doesn’t end with Jones’ voice though as it spreads throughout her songwriting, a process she described as “pretty daunting” overall. “I think the least daunting would be the vocal melodies, though,” she reasoned. “Those are usually less of a struggle. Everything else is though. Lyrics are the worst and writing guitar parts is like this weird puzzle that doesn’t have a set number of pieces, but it all comes together eventually.” That puzzle explanation seems to fit a track like “Skin,” a twisty piece towards the end of their debut record that sticks out as a sore thumb at first listen yet also shows off Jones’ overlooked experience.

In addition to All Dogs, Jones also has an avant-garde act entitled Yowler and has also spent time with the twangier group Saintseneca. Obviously, the question of overlap between all these different moving parts needs to be addressed and Jones was more than happy to offer some clarification. “I’ve always written songs, since I was like 16, so a solo project has always been there, and I used to release solo songs under my name. I wrote a lot of sad and quiet songs. I started writing songs that were not quiet so I started All Dogs. Yowler began as a desire to return to that previous world but with new intention. So I guess they’ve had a relationship with each other, but honestly, they kind of do actually live in two completely separate parts of my brain. When I write a song, I pretty much instantly know what project it’s gonna end up in and there’s no overlap.”

Still, the more she dives into Yowler, the better it benefits All Dogs as it providers her with a better sense of melody, structure, and vision. Perhaps it’s the reason All Dogs stock is on the rise as they continue to tour endlessly around the country, a process that’s seen them pass through Virginia’s humble capital multiple times already. “We have great friends in Richmond, and always have a really good time playing at Strange Matter. I’m also looking forward to it because it’s the first night of tour so there will probably be some exciting and nervous energy flowin’. Also 821 Cafe is so good that it’s ridiculous, we will definitely be going there and I can’t wait.”

All Dogs play Strange Matter tonight opening for Diet Cig alongside Kississippi. Tickets are $10 with the doors opening at 7 PM. For more information, click here.