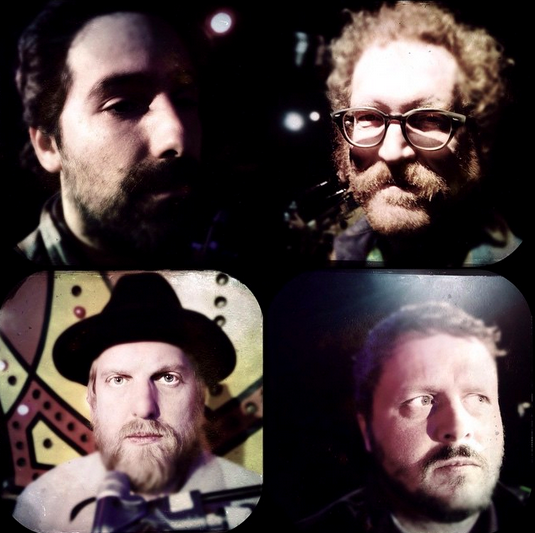 Their new record, All Across This Land, is being pushed as a “return to form” for the band and is something the band believes is not only comparable to their celebrated records like 2008’s Furr, but might just be a step above. As the band prepares themselves for the never-ending tour bound to occur in the promotion of this new record, we got a chance to chat with vocalist and songwriter Eric Earley about what makes this record truly stand out.

Early in our conversation, Earley stated a very simple fact: “We spend a lot of time travelling.” At first, it was innocuous, but as Earley kept talking and discussed the genesis of their new record, it became apparent that the band’s constant traveling has definitely left a permanent mark on the band’s mind so much so that even when the band has an easy travel year like they have in 2015, it’s still all that occupies their mind.

“The road is definitely a totally different animal,” Early remarked. “It can be pretty harsh.” It’s this mindset that dominates Blitzen Trapper’s new record and it’s not even surprising in the least bit. THe band has worked at honing their penmanship and live repertoire since their debut in 2003 so much so that they find themselves in demand at every type of festival imaginable. Jam band festival with six Grateful Dead tribute bands? Blitzen Trapper is a good fit. Indie festivals with a sea of kids wearing Sub Pop shirts? Blitzen Trapper is a good fit. First time festival just trying to make a name for itself? Blitzen Trapper is a good fit. It’s the accessible, but impactful nature of their music that has the band in such demand, but has also led to the band’s past ten years whipping past them in a tour bus or van. At this point too, Earley admits they’re looking to do more now than ever.

“If anything, we pack in more stuff now because we’re experienced on how to stay relatively comfortable most of the time on the road.” Earley admits his resolve to stop drinking four years ago helped ease his traveling woes and it’s the calming effect it had might just be why the multi-instrumentalist was able to write a road record with such clarity.

“I wrote all of these songs in a four month period together as opposed to other records where I wrote them over the course of a year or two. The songs themselves are simple, but they lent themselves to these natural arrangements that came out which all had this moving energy to them. Even the songs that aren’t specifically about travel just seem to move at the same pace as the others making it all flow. It’s a record that really feels like it’s moving all together as unit so it makes sense it’s mostly about travel.”

Though he finds it hard to decide, Earley admits he thinks it’s the best record in some time and might just be better than Furr, although he does admit the album’s change in production style had a big part in it. “It’s definitely a bigger sounding record,” he revealed, “and it’s because of the production. The difference this time is we had a guy up in New York mix it who’s just really good. James Brown. He mixed it and just made this really huge sounding collection.”

Brown is one of music’s most sought after mixing engineers whose extensive credits include works with stadium bands like Foo Fighters and U2 and plenty of studio time working side-by-side with famed producers like Butch Vig and Gil Norton. At first glance, it might seem like Brown was almost out of the league for Blitzen Trapper, but Earley was quick to step in and reveal how it all came about.

“He just so happened to be a big fan of ours. We had a couple of people who we were going to get to the mix the record and they fell through. Word got around and his management reached out to us and said James was into our band and very interested in mixing the record for us. He brought down his price for us and ended up mixing the record in a really, really cool situation for us. We’d love to use him again too, if we could afford him. He was great.”

Outside of the vast production, Blitzen’s new record falls in line sonically with their previous works with a hodgepodge of influences making for a clear Americana sound from track to track. If you’ve got a good ear, you might be able to pick up the specific influence on each song, but with the deep musical taste the band has, it’d definitely be an arduous undertaking to uncover.

“This record really came from all the influences I’ve stored up over the years. I think every song has a different influence, but it all comes from the same place. It’s all very Americana. Dylan, the Eagles, Neil Young. Even The Replacements and R.E.M., which were my favorites in high school, influenced much of the record.”

Unlike other bands that tour endlessly for years and years, Blitzen Trapper was not content with making the same music over and over again. Sure, the core of the songs don’t stray too much from the formula that’s made them so popular over the years, but how often do you hear of an Americana band looking to make their sound more spacious and grand after eight albums together? Most of them are slowing it down or even reducing themselves to an album full of covers. Instead, Blitzen Trapper set their sights on one-upping their entire catalogue and in doing so, invoked an unlikely muse in a way that made their music just as accessible and relatable as it’s been from the start.

Blitzen Trapper headlines the Know Good Beer Festival this Saturday on Brown’s Island along with Kopecky, Those Darlins, Sleepwalkers, and more. For more information on the show and where to buy tickets, click here.