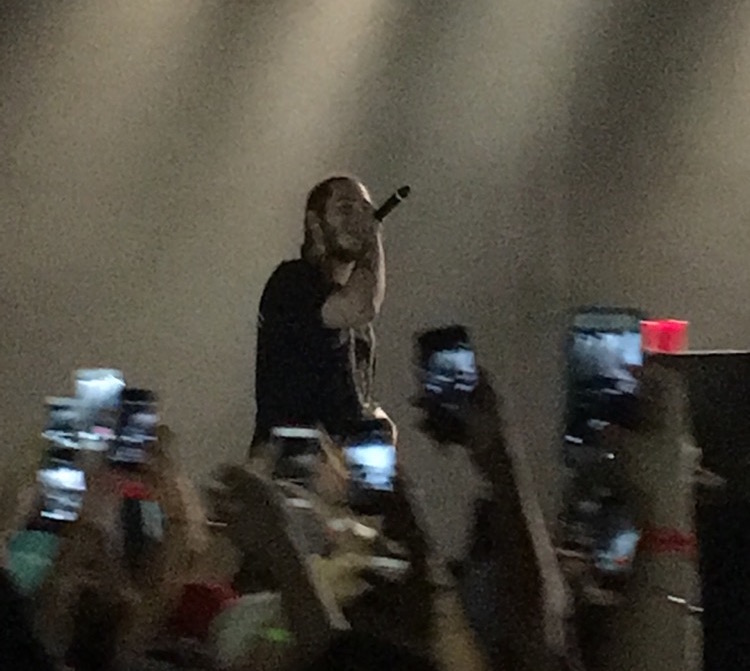 The 20-year-old artist from Dallas is amongst the newest crop of artists that have blown up off of one single, including artists such as Lil Yachty, Kodak Black, Bryson Tiller, Desiigner, etc. “White Iverson”, amongst the highest charting singles of 2015 led to a record deal with Republic Records, a guest spot on tour with Justin Bieber, and collaborations with acts such 50 Cent, Kanye West and Bieber.

Typically listed as a rapper, Malone has found success as a sing-song hybrid that croons as a more melancholy Drake. He frequently utilizes guitar and country instrumentals in contrast to the 808s and heavy beats that many young hip-hop artists frequently exploit.

Last Thursday night The Hollywood Dreams tour’s stop in RVA offered a chance to see if the performer was worth more than his one hit single.

Once past the initial crop of performers, the two major acts with substantial buzz took the stage. Jazz Cartier, a 23 year old from Toronto, Ontario preceded Malone and maybe to the latter’s detriment.

Cartier is raucous, energetic and versatile on stage. Backed by Fk1st, Cartier ran through his buzz-worthy mixtape “Hotel Paranoia” including cuts such as “Stick & Move”, “I Know” and the hype “Red Alert.”

Already receiving notoriety as a film creator, Cartier’s groundbreaking 3D video for “Red Alert/100 Roses” is a good look into the artistic vision of the upcoming artist.

After leaving the crowd, even for those maybe unfamiliar with his work, Cartier set the bar high for the headlining Malone. And some fans may have preferred for Cartier to just perform another set.

To call Malone melancholy may be unfair, but his mix of country and rap does reach a lull pretty quick live. Although that isn’t necessarily a concern for listening purposes, at a concert that featured a lively Cartier performance, the follow-up can’t drag as he did.

Initially coming out to a snippet of “White Iverson”, Malone then went into a slew of his early soundcloud singles, including “That’s it”, “Tear$” and “What’s Up”. The mid-tempo tracks had a slight bounce in them if only for the crowds persistence.

Things took an even worse turn when Malone launched into his debut mixtape, August 26

to minimal response. Although most of his streaming numbers on soundcloud range between 1 to 10 million hits, Malone only had die-hards actively engaged throughout the whole set to a detriment.

Malone closed the show with the full version of his smash “White Iverson”. Although also a mid-tempo track, the track is so popular the dreary audience momentarily livened.

If there’s any slack to be cut for a boring set, it’s that Malone is young and inexperienced.

Perhaps not performing enough has manifested in a slower set, most noticeable in his lack of crowd control.

He’s certainly talented and has a knack for catchy melodies, but to truly ascend to brighter heights, Malone should aspire to liven up his live performance.