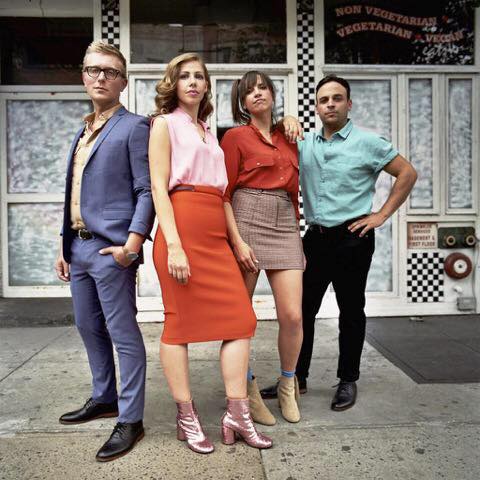 Richmond should be well accustomed to retro rockers Lake Street Dive by now.

Richmond should be well accustomed to retro rockers Lake Street Dive by now.

For years now, the band’s been logging thousands of miles on vans and buses as they endlessly travel across the country, spreading the word about their soulful sound and timeless talent. This non-stop touring approach has invariably brought them to Richmond and our surrounding neighbors over the years and since their first performance in the region in 2011, they’ve steadily raised their profile.

It’s not just immeasurable buzz either as each of these performances have seen their audience risen as they travelled from intimate, dark back rooms to the bright, spacious fields like their 2013 performance at Friday Cheers. It’s something the band has replicated in cities all across America and in 2016, they’re finally beginning to see their hard work bleed into other areas of their career.

Last month, the band released Side Pony, their fourth studio album to date as well as their major label debut. It’s done remarkably well for the band and while much of it can be placed on the success of lead single “Call Of Your Dogs,” no one’s fooling themselves into thinking this is not the result of years of hard work out on the road. “We’ve sold more records in the first couple of weeks with this one than we’ve ever done with the past records,” singer Rachael Price told us. She could hardly express her excitement for the attention given to their new album, but as great as selling records is, Price admitted that the road remains something they need to remain focused on as well. “The nature of the industry right now is you’ll make a better living if you tour a lot since records just don’t sell the way they used to sell,” she divulged. “You don’t have an option to focus on one or the other. You have to focus on both.”

It’s not an unreasonable thing to expect of a band, focusing as much on the live aspect of the band as much as you do the studio, but for Lake Street Dive, it’s very clear which of the two they’re really more drawn to. “We just love playing live,” Price gushed. “Playing in front of an audience is definitely how we learned to play together as a band and that’s always going to be one of the biggest parts of what we do.” This fervent passion for stage performing comes shows too and may just be an overlooked aspect to their success as a touring act — second entirely to their musical prowess of course. Whatever the reason though, it’s allowed Price and the rest of the band the opportunity to live full-time as musicians, something she admits is “the top of the mountain” and “a crazy dream that just came true.”

Getting to this level though is only the beginning for Lake Street Dive though as they continue to work hard at making them one of the music world’s best touring performers. “We’re just really focused on building that live show,” Price stated. “We’re constantly looking at reviving old songs, working on new covers, and gauging crowd responses.” Reading the audience is something Price has been pretty vocal about in the past, something she attributes as a necessary tool to use if for those wanting to propel their work forward. “We’ve always based what we did on what we heard live,” she explained. “We’re always assessing ourselves after every show even if it’s just a tiny bar with twenty people. Just learn what works and what doesn’t and go from there. We’re always trying to change it up on stage every night with that in mind.”

It’s a great philosophy to have, but also one that could lead to the perilous direction of pandering to the crowd, something Price was well aware of. “We try and walk a really fine line,” she revealed. “We want to keep the songs fun, accessible, and sort of like ear candy, but we’re also always trying to slip more involved musical aspects into our songs.” Having four strong songwriters in the band helps walk that fine line, and actually makes it look effortless for the band, even as they travel across style from bubblegum pop to Motown soul. “None of us ever pick a specific genre for a song,” Price detailed. “We just took what someone wrote and committed ourselves fully to the sound needed to make it work. Whatever the song called for, we’ve always wanted to do it all the way.”

That approach gets stronger with every release from the band, all leading to bigger and better works like Side Pony. It’s allowed them to grow all aspects of their band and reach a level where they’re finally considered pivotal artists in today’s music scene. “This year so far just feels like a culmination,” Price remarked. “We’ve really spent our time, especially the last three years, building our fan base and touring non-stop. Fortunately, the live audiences have kept growing along with sales and everyone seems just as excited about Lake Street Dive as we are. We’re really blessed and we’re not going to take this opportunity lightly at all.”

Lake Street Dive returns to Richmond Saturday night at The National with openers The Suffers for a sold out show. If you’ve got tickets already or are lucky enough to score some before the show, doors are at 6:30 PM with the show set to go on at 7:30 PM. For more information, click here.