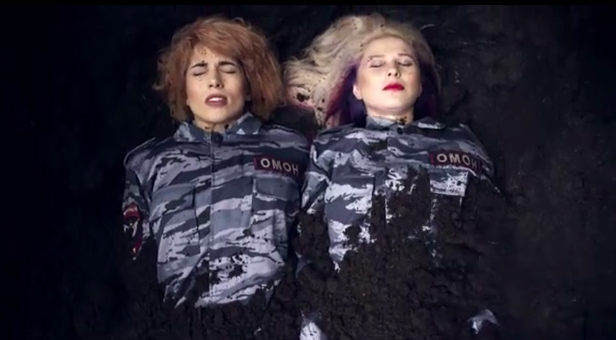 The badass protest group-turned-musical act Pussy Riot has released a powerful new track and video which is sure to give chills and inspire some rage.

The badass protest group-turned-musical act Pussy Riot has released a powerful new track and video which is sure to give chills and inspire some rage.

Check out the new video for “I Can’t Breathe” below:

The track is a tribute to victim of police violence Eric Garner, the NYC man who died during an NYC police arrest for selling lose cigarettes.

“This song is for Eric and for all those from Russia to America and around the globe who suffer from state terror – killed, choked, perished because of war and state sponsored violence of all kinds – for political prisoners and those on the streets fighting for change. We stand in solidarity,” said the band in a release sent out today.

Pussy Riot was actually in NYC during the protests this past December, and this song was recorded one night during their stay in the states.

“We had been taking part in the protests, walking with the protesters who were demanding that the police be held accountable for Eric’s death and demanding change,” said the band. “We got together and decided to make a dedication based on Eric Garner’s last words because we felt these words so deeply.”

The spoken word bit towards the end of the track are Garner’s last words read by Richard Hell, punk music and fashion innovator from 70’s punk bands like Neon Boys, Television, and The Heartbreakers.

As for the visuals behind the new song, Pussy Riot said they wore Russian police uniforms as part of their broader statement against police violence.

“The police uniform carries special powers on the street in the United States, in Russia and around the world. Those who put it on are granted a monopoly to enact violence, that’s a power we delegate to them,” the band said, explaining how their own burial in the video represents how cops are part of a violent system where, when they follow violent orders, they become “hostages and are buried with those they kill, both figuratively and literally.”

Even if you don’t agree with their politics, the video is powerful and the song is pretty damn good.