Wednesday Sept. 2 was a busy night loaded with local talent as Radio Rubber Room Presents hosted its third by-weekly free music event at The Camel on Broad. The show featured Keith Yetter and The Old Yellers, Stay In, Close Talker, and Sea of Storms. We have a lot of ground to cover so let’s jump right in.

Keith Yetter kicked off the night with the first performance of The Old Yellers. On most nights, Keith is a solo acoustic Folk guitarist and singer/songwriter. He was, however, accompanied this evening by Jordan Lette and Pat Keefe (electric guitar), Andrew Sisk (drums), Tara Dillard (fiddle), and Joseph Doyle (bass). They began with an original piece aptly named “Sailors Song”; a sea ballad that established the tone for the rest of the set. The song starts with a solo guitar strumming for four or five measures joined, suddenly and simultaneously, by drums, strings, and lyrics. 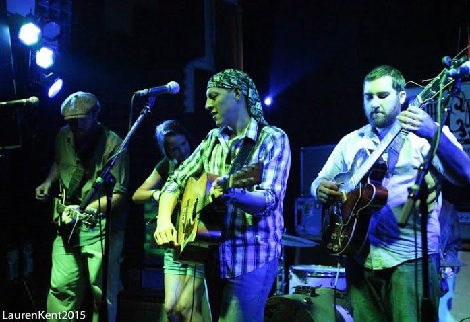 What followed was a toe-tapping treat of old fashioned, home grown Folk. The set was comprised entirely of Yetter’s original songs (with the exception of one John Prine cover). This was the first time the group has performed together, having only practiced together once, but Yetter assured me that, if he has anything to say about it, it will not be the last. Check out his music here.

Next up: Stay In. Stay In is a local rock trio featuring Julia Louise (vocals/guitar), Will Neer (drums), and DJ Condon (bass / vocals). Their sound blends Emo-Pop with hard-edged anthemic Rock & Roll. Although Louise is the featured lead vocalist, Condon does most of the talking.

I can’t imagine this is due to any particular proclivity for public speaking as Condon is hands down the most awkward frontman to whom I have ever had the pleasure to bear witness. His banter consists of long pauses intermittently interrupted with such brevities as “this is really cool” and “this is really sweet”. He is loutish and mumbly, and the crowd eats it up! I think this is because above all, he comes across as genuine. Or perhaps it’s because their particular brand of emotion-driven rock appeals to a real world audience who simply can’t relate to the slick, uber-charming, charismatic frontman.

Of course, it could also be because these kids (sub 21) are a solid rock outfit. Having listened to their bandcamp prior to the show, I was blown away by how closely they were able to recreate the crisp album sound in a live setting. Louise sings verse with measured precision and a voice that belies her age and Neer rounds the trio out nicely as a clean pocket drummer. Check them out here. 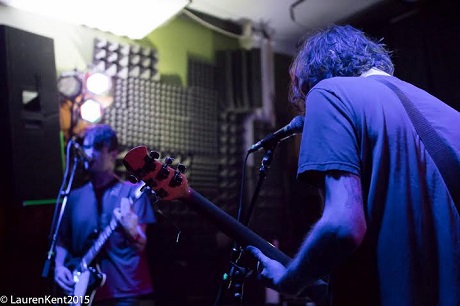 The third band of the evening was Close Talker. I would describe Close Talker as emo punk/rock. In fact, every song on their 2013 summer release So Am I is seemingly either a love ballad or the condemnation of love itself. To say that this makes them relatable might be redundant. Think Story of the Year “Until The Day I Die”.

They are a high energy band with great crowd response and participation. On a side note, I personally enjoyed their stage positioning with lead vocalist and guitarist Jack Paverelli positioned up front at stage right opposite (and directly facing) lead guitarist Cory Smugg. Tucked in behind Smugg at rear stage left is bass player Charlie Smoark.

Drummer Steven Birch plays his striped down 4 piece drum set with only his hi-hat and a single ride for brass at rear center. front center is left open and becomes a sort of communal space for Smugg and Paverelli , which they use alternately for the sending back and forth of dueling guitar licks and the obligatory jumping and jiving that goes so naturally with the upbeat rock they produce. As a vocalist, Paverelli is strong with a powerful, projecting voice that drives Close Talker. Everyone seems very comfortable on stage and the band delivers a solid performance, as evidenced by a warm crowd reception and ovation. Check them out here. 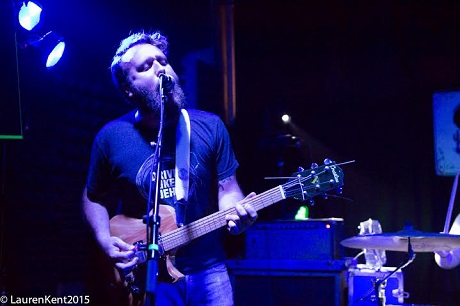 Next up on this jam-packed lineup is Sea of Storms, our third post-punk band and the final performance of the evening, featuring Brandon Peck (Guitar/Vocals), John Martin (Bass), and Chris Brown (Drums). This bearded trio has been hitting it hard on the RVA music scene since 2012. Their music incorporates power metal guitar, heavy bass riffs and powerful drum rhythms to create the pleasing and singable melodies that define melocore. They also have a loyal following. Even though they went on at midnight on a Wednesday, there were suddenly people in the crowd I hadn’t seen all night and they all seemed to know the words, lyrics no doubt fresh in the memory due to the band’s full length release in June titled “Dead Weight”. Individually, Peck, Brown, and Martin strike me as serious, but approachable guys, who play a well-rehearsed show and are very comfortable in their own skin. Check out their latest album at here.

That does it for this week’s Radio Rubber Room Presents Live @ The Camel. Next week’s show will feature Calvin and the Red Stars, Decide by Friday, Headless Mantis, and Faceship Sept 30.

As always, visit us at radiorubberroom.com to stream our weekly podcast, featuring live interviews and recordings of your favorite Artists, and discover new pleasures for your ear holes. Until next time, keep your eyes to the skies, your ears to the ground, and your hands to yourself!