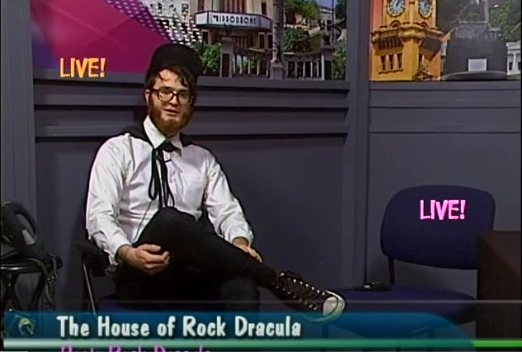 For those of you who tune into Richmond’s public access channel, your Thursday night’s just got a whole lot more interesting. And for those who don’t, it might be time to get with the program.

For those of you who tune into Richmond’s public access channel, your Thursday night’s just got a whole lot more interesting. And for those who don’t, it might be time to get with the program.

House of Rock Dracula, a music and culture tv show premieres every Thursday night from 6 p.m. to 7 p.m. on Richmond’s Public Access channel, hosted by Rock Dracula himself.

The show, launched in October, is a call in show that features a combination of live musical performances and a romance panel of local icons native to the Richmond area. On previous episodes these people include Kestrel from local band Fetish Gear, Meat Loser, and musical performances by Cecilia and local beat maker Sha Shakusky.

Rock Dracula, who claims anonymity, saw his window while he was volunteering at Richmond Public Access for a few months.

“I’ve always wanted to pull together a show just to bring the stuff that I like in RVA to Public Access because the programming is really limited to sort of informational broadcasting and I wanted to get a more creative side to it,” said Dracula.

The show acts as a forum to the public and relies off of volunteers. “People can call in and say whatever they want. It’s very loose, we’ll take any calls we can get.”

While Rock Dracula has a loose group of collaborators working on the show, he does most of the organizing himself. “The way I envisioned it originally is a showcase for musicians and artists in RVA,” he said. “If anything, more so a focus on solo artists doing electronic experimental work.”

This is Rock Dracula’s first broadcasting endeavor, and he is doing his part to showcase the immense talent here in Richmond.

“[ Richmond Public Access] is an incredible resource and is criminally underutilized and that’s a reason why I went into it. I wanted to show people there is so much you can do with the organization,” said Dracula. “I also wanted to do a small part in making a place where we can showcase these smaller electronic acts that I don’t feel like have any particular access to exposure in Richmond. I wanted to provide any small little part to help out.”

The show airs every Thursday from 6-7 p.m. (channel 95 for Comcast users and channel 36 for FiOS users)

The more calls, the more exciting the show can get. So be sure to bring all of your enlightening questions and call (804) 915-5202 during the show’s time. If you’re a local music act and are interested in participating, you can email Rock Dracula himself at [email protected]