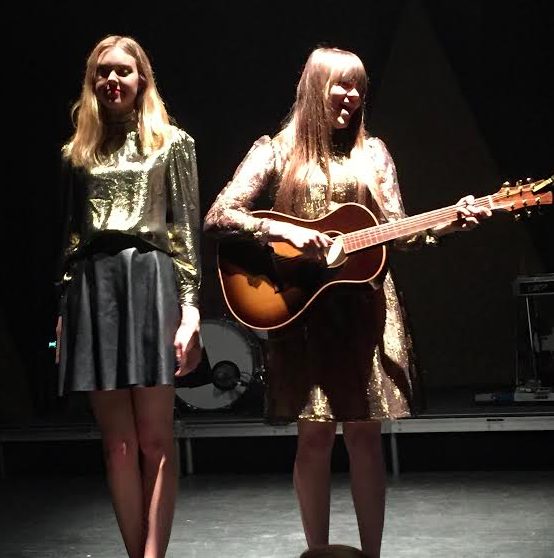 Four years ago I announced on my college radio show that First Aid Kit would soon slowly be taking over the world.

Four years ago I announced on my college radio show that First Aid Kit would soon slowly be taking over the world. While I didn’t exactly think it was true, I sure as hell meant it. The idea of two Swedish sisters in the midst of being teenagers making folk music way beyond their ears seems absurdly great.

I apparently was not alone in that assertion, as the band continues to gain popularity. It seems whomever comes across them is usually smitten and converted into a believer soon enough.

In case you’re in the dark, the band is made up of two sisters, Johanna and Klara Söderberg, who at a very young age started making Americana and folk-inspired music back in their home of Enskede, Sweden. Myspace momentum and the appealing resurgence of folk music made the duo an easy band to sell and soon they were doing music full time before Klara was even in high school.

Eventually the band attracted some big name fans such as Conor Oberst, Fleet Foxes, and Jack White while becoming a smash in their native country. Finally, the band was signed with Columbia records here in the states and Witchita records overseas to release their debut major label album The Lion’s Roar in 2012. The band found an audience and is slowly branching out with their new album, Stay Gold, which was released this summer to glowing reviews – a phenom the band has becoming accustomed to.

As for their performance at the National on Sunday, Samantha Crain opened the show with an impressive solo set. Crain hails from Oklahoma and shared various stories behind her songs and even a preview for the upcoming movie Convoy 2, which will feature some of her songs. Or at least that’s the goal for her, as Samantha had a very playful sense of humor and came off more memorable as a storyteller, just as her songs did. Crain has been a great kept secret in the singer-songwriter world for a while now and here’s hoping this isn’t the last we’ll see of her.

Like clockwork, at 9pm the lights dimmed and soon the stage was made ominous in darkness. First Aid Kit took the stage and went into the one two punch of “The Lion’s Roar” and “Stay Gold.”

Both are the titular tracks to their last two records and represent the band’s songwriting strengths and sheer vocal talent. Hearing this band live is like hearing the record–and I actually mean that in a good way. Showing how little studio trickery there is on their records is really impressive and makes clear just how tight they are live.

Seemingly nervous due to the crowd’s enthusiasm, it took a while for the girls to get chatty. Despite them barely being above the drinking age, the sisters have been on the road supporting albums for over six years now. In that time the band has accumulated a small arsenal of songs to pull from.

Despite this, the band went into a story about meeting Jack White, then performed his “Love Interruption” and completely owned it. Working as a four-piece consisting of guitar, steel guitar, drums, and keys really show how minimal the initial the approach to the songs are but seem so lush especially with Johanna and Klara’s vocal harmonies driving them.

Perhaps none was as stirring as “Ghost Town,” from the band’s first EP, sung acapella with the crowd and two spot lights still on the sisters. It’s a raw moment like that leaves a lasting impression. The crowd being so receptive throughout the night seemed to charm the sisters as they told jokes about cheese puns, since that seems to be another passion of theirs. Now that’s intimacy.

The set went fast with a tight thirteen songs and an encore of three. “Emmylou” – the band’s unequivocal banger – ended the night. It’s catchy, swelling, twangy, and meekly romantic. It’s something out of time and brilliant without seemingly sounded like a re-hash of what’s been done to death.

To say it brought down the house might be an exaggeration, but it proved to be the biggest sing-along and left the crowd optimistically quite content. World domination is probably not happening any time too soon for the still-very-young duo, but if it does, First Aid Kit will certainly be ready for it.

Powered by coffee, Kyle Shearin is a regular contributor for RVAmag for better part of the decade. Mr. Shearin studied journalism/film at VCU while eventually graduating from the University of Mary Washington with a B.A. in English Lit. Started KCC (Kyle's Criterion Corner) in 2015. Probably likes a lot of the same stuff you do.
Topics: First Aid Kit, folk pop, live shows, RVA live music, The National