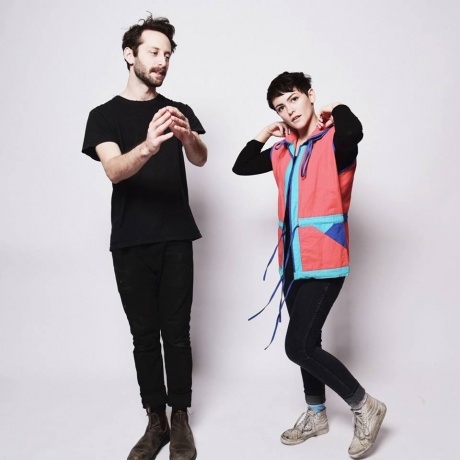 Musicians need reassurance too, even those as dazzling, empowering, and forceful as New York duo Diet Cig. You can have all the buzz in the world and a fanbase that grows by the hour, but the confidence has to be there no matter how you get it.

Sometimes, it comes from just a pep talk.

“I had to kind of remind myself that I’m good at this,” vocalist and guitarist Alex Luciano remarks. “There’s a reason I’m doing this so I just had to reassure myself saying things like ‘I got this. I swear.'”

The duo’s debut full-length, Swear I’m Good At This, takes its name from this state of mind, one that’s much more focused on proving your worth to yourself than anyone else. “Once we realized [the band] was a serious thing, like it’s our job, I just needed to prove to myself I could do it and that I was worth it,” she states.

Success came early for Luciano and her musical partner, drummer Noah Bowman. In the summer of 2014, the duo met in New York at a house show concert where Bowman was performing… only to be interrupted mid-set by Luciano as she searched the venue for a cigarette lighter. The very definition of a musical meet-cute, that chance encounter led to the two forming what would become one of the most celebrated live acts of the last several years. In less than six months after that fateful night, the band would release Over Easy, their first EP containing five breezy, yet thumping pop-punk tracks that were wildly praised and earned them an instant following that became rabid for anything the duo put out, even if they were still finding their sound.

“I think we had done maybe two shows before recording that EP,” Bowman remembers. “We didn’t really know what we wanted from each other or how we wanted the music to sound, but we started to learn quick with all the shows we were doing.”

For the next year and a half, the duo lived on the road with only quick breaks here and there between tours. “We’d come home for a couple of days and try to adjust, but we’d have to go right back out in a few days,” Bowman laughs. The constant cross-country travelling weighed on the band, but they admit it was crucial in helping them find the voice and style that’s made their debut record so acclaimed in the few weeks since its release.

“I was just sitting in the van all day, every day, with all these thoughts and emotions and the road became a good place to unpack these feelings for myself,” Luciano explains. Stuck in a car seat for several hours each day, she took to writing in journals and writing down rough ideas of songs she had floating in her head to pass the time. Though it all came from her life on the road though, Luciano was quick to clarify that this was hardly a record written about the dread of travelling.

“The lyrics I wrote don’t necessarily represent me as a touring person, but I think the environment of touring helped influence the way I unpacked those thoughts and feelings,” she reasons.

Around this time, Luciano also solidified her stance as a feminist, a philosophy that boldly comes through on many of the songs that make up Swear I’m Good At This such as “Link In Bio” and “Tummy Ache.” Finding solidarity and inspiration from like-minded musicians across the country, Luciano was able to realize how intertwined her own thoughts and feelings were with the beliefs of feminism, something only bolstered by current events and her introspective time on the road.

“It comes through in a lot of the songs on the record because they’re very personal songs about my own feelings, but those feelings also happen to be my ideals of feminism and empowerment,” she details.

Though Luciano describes herself as an emotional, heart-on-the-sleeves person, there was a bit of trepidation as she hadn’t quite expressed these feelings in her music before. As she started to write and unload her mind though, she found the release of emotions to be not only cathartic, but comfortable as well.

“It’s really cool to be able to take those uneasy feelings and experiences I had and reclaim them by turning them into this piece of art I can scream at the top of my lungs in a rock song,” she lively states.

To Bowman, the time on the road was equally satisfying, even if he admits it was challenging at times. “At times, it was hard to have enough time to even get a thought out, let alone write a song,” he jokes. But the time on the road helped the duo find the right direction for Diet Cig, one that led to a sound he described as “truly us.”

“Playing so many shows together over that time really helped guide us to the sound we wanted to achieve, something that pushed the boundaries of what we could do and also sounded honestly bigger than just the two of us,” he says.

After a year and a half of messing around at sound checks and finding places to hide away to complete a verse, the duo cleared their schedule in October of 2016 to finish this new batch of songs. “We just wanted to take the whole month and finish writing and get in the studio to make sure it was all done,” Bowman recounts. “We were completely ready for it. We just never had the time or chance to do it because we were playing so much.”

Entering the studio, the band set their sights high by quickly pushing their pop punk into expansive territory. Some additions were subtle, like the synthesizer parts on “Maid Of The Mist,” while others were much clearer like their use of a fuzzed out wall-of-sound on songs like “Leo.” Ideas came from everywhere, but the duo admits the diverse list of bands they toured with definitely had an impact.

“They are just so many things a rock a band can be,” Luciano posits. “Every band we toured with, we took a little bit from each, just being inspired by anything and everything they did.”

Some bands had a tangible effect on Diet Cig – things like a different approach to drumming or concrete touring advice — while others had a much more cerebral impact on the band such as Nashville rock band Bully. “We toured with Bully and it was… just… wow,” Bowman gushes. “Alicia [Bognanno] is just so fuckin’ good.” Luciano was quick to agree. “One of the best rock bands I’ve ever seen in my life! God, I learned so much watching them.”

All of these experiences gave the duo new life in the studio throughout October, a time that never felt rushed according to Luciano as the duo took their time and thoughtfully crafted their record. Released at the beginning of April on Frenchkiss Records, Swear I’m Good At This earned strong reviews from critics and fans, with praise focused on the sonic leap the duo made as well as the stirring lyrics that make each song unforgettable. So beloved, the record even earned rare defense from musicians and publications when a few critics dared to disparage its quality.

Twelve songs make up the record and naturally, the duo has already gravitated towards their own personal favorites. “I love the singles of course, like ‘Tummy Ache,'” Luciano says, “but I also really love ‘Maid Of The Mist.’ It recalls our Over Easy side in a way, but it’s still within our new sound that we’re doing. That song is really so poppy and fun and I was really proud of the vocals and harmonies at the end.”

Bowman also enjoys the singles, specifically “Link In Bio,” but while he loves the wide sound they were able to accomplish, he highlighted the record’s most reserved track as a favorite. “I really love ‘Apricots,'” he laughs. “The rest of the record is big and loud and in your face, and this one’s a nice contrast. It’s just Alex with an acoustic guitar in a kitchen. I love that it’s the most stripped down song on the record. It’s like a little step into Alex’s thoughts for a second.”

Truthfully, the entire record is a step into the thoughts of Alex Luciano, ones wrought with apprehension and indignation. Guiding you through that mind are the scopic sounds she and Bowman have crafted, bold and resourceful harmonies and melodies that fly past the pop-punk moniker they were casually saddled with years ago. Those sounds fluctuate throughout the record of course, but they never waver in their ability to support the album’s authentic intimacy, something that makes the record equal parts endearing and rousing.

All you need is one listen and you’ll know one thing: Luciano needs no further reminder that she and Bowman can truly do this.

Diet Cig play Gallery5 tonight with Daddy Issues and Waiting For Silence joining them on stage. Doors are at 8 PM, music starts at 9 PM, and tickets are $12. For more information on the show, click here.

Former RVA Magazine Print Editor, Sound Gaze Host, The Auricular Editor, Off Your Radar Editor. I like music and I write about it.