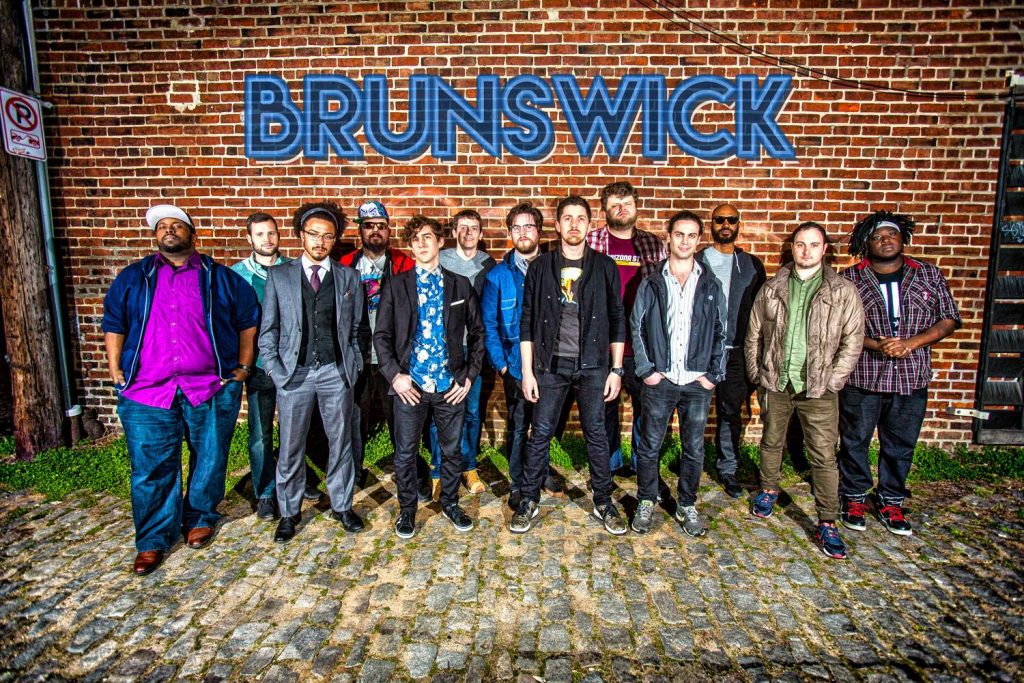 It’s been five years in the making, but we finally have a debut album from Richmond brass ensemble, Brunswick.

The 13-piece jazz orchestra is the brainchild of John Hulley, member of another little Richmond brass group who you may have heard of, NO BS! Brass Band. Hulley, a former trombonist in the VCU Pep Band, recruited the talents of his fellow bandmates Reggie Pace and Sam Koff when he started this project back in 2012.

Entertaining fans with their original compositions as well as putting their own special twist on well-known hits, the big band jazzy ensemble brings a fresh take on the genre.

Fittingly titled Five Years, the nine-track album, slated to drop June 16, is a culmination of what they’ve been working on and performing over the years, showcasing Brunswick’s more modern jazz sound, with some “emo jazz,” as Hulley referred to it at one point during our chat, thrown in.

“The album is all original music, there’s no covers on there,” Hulley said. “We started with a bunch of covers and a few originals. Usually, we’ll play two full sets of music in a night, so we do have a lot of cool covers in our book, so it took awhile to make a full album of original music.”

But while the ensemble kills it with covers like Daft Punk’s “Something About Us”, and Frank Ocean’s “Super Rich Kids”, Hulley said when it came to putting out the band’s debut record, he wanted a compilation that was uniquely their own.

“I felt like it was the most representative of the band and the sound,” he said of Five Years.

Hulley just wrapped up his tour with Bon Iver, but I managed to catch a quick moment with him to chat about the album, what its like performing with big names like Iver and Sufjan Stevens, and their upcoming release show at The Camel. Oh yeah, and the awesome video the band is letting RVA Mag premiere.

The song, “Through the Trees” is the third track on the album, which features local dancer Russy J grooving through the Randolph neighborhood.

“We {Russy} sat down and listened to a couple different tracks, and I said nobody had done anything for that one yet and he was like, ‘Yeah! This one works great for me!’” “The jacket Russy wears in the video, that is also on the cover of the album, was designed and painted by EARL MACK, a local RVA artist and one of my favorite creative dudes in the city.  It was awesome finally getting a chance to bring him into the fold on one of my projects and something I had been hoping to do for awhile since becoming a fan of his work.”

While the band didn’t officially get in the studio until about two summers ago to record Five Years, Hulley said all the material has been building up since he first embarked on the project, but his hectic schedule never allowed him time to fully focus on it.

Indeed, if you’ve been following Hulley’s success, than you know he’s been quite the busy guy from performing at the Eaux Claires Music & Arts Festival in Wisconsin alongside Pace to sharing the stage with huge acts like Blind Boys of Alabama to performing as a member of Sufjan Stevens’ backing band, and most recently, touring this spring with Bon Iver.

“I have been blessed to be on some of on these amazing tours, and it’s been a minute since I’ve been able to find the time to really drop this thing, so it’s exciting to finally be able to put it out,” he said.

Pace has been involved with Bon Iver on and off since 2011. The indie rock band, fronted by songwriter Justin Vernon, asked the No BS! Brass Band leader to put together a five-piece trombone section for them and so he grabbed some of the usual suspects.

“I fit the long list of five trombones if you keep putting enough trombones in a band, eventually I’ll show up,” Hulley said laughing. “We been doing that since the past fall and it’s been a lot of fun hanging out and playing music with those guys.”

Hulley kicked off his tour with Bon Iver on May 24, making stops in Portland, Washington for Sasquatch Music Festival, Canada, Chicago, Indiana. and wrapping up the tour at this weekend’s Bonnaroo Music Festival in Manchester, Tennessee.

Once they were finally ready to get into the studio, Brunswick, whose name comes from Hulley’s hometown in Maine, sought out the expertise of Adrian Olsen at Richmond’s Montrose Recording.

“He’s recording people from everywhere all the time, but also finds a way to get a bunch of Richmond acts in there, and that’s not on accident, he really cares about making sure Richmond bands want to record with him,” he said.

Producing the album is Papa Hotel Records, run by Hulley’s dad, which is awesome. “He was really interested in helping out. He’s been pretty excited about telling all his friends that he’s the head of a record label,” Hulley added.

Fans of the funky “Fire Circle” will be stoked as that makes its appearance as the second track. RVA Mag also had the honor of premiering that video, which the band recorded live at Round Two, back in 2016. And as for the record in its entirety, Hulley said the band has more than just a few tricks up their sleeves.

“The album is structured in an interesting way, I sort of think of the album as eight tracks that have the Brunswick sound on them, and the ninth track is sort of this jazz epilogue that’s like, ‘hey we can do this do.’”

The eighth track, “Henry Wadsworth” is a tune the band closes out most of their shows with, and one of the first songs Hulley wrote for Brunswick.

“It’s definitely one of the more rock and roll finale tracks, and then once that concludes, this straight-ahead bop-jazz track begins, and its like, ‘oh yeah, just you guys know we can do that jazz thing so check this out’,” Hulley said. “Its birthed out of brass band world, but it also has much stronger indie rock influences between all the stuff I listened to growing up. “

You can bet this show will be one for those that have been following Hulley since his days at VCU Pep Band, to his energetic performances with No BS!, and new fans who have discovered him on bigger stages in the last few years. Don’t miss Brunswick performing Five Years in full for the album release at The Camel this Sat., June 16 at 8 PM. $5 cover. Local rapper Chance Fischer and CGI Jesus will join the festivities and you can also snag a copy of the new album at the show.