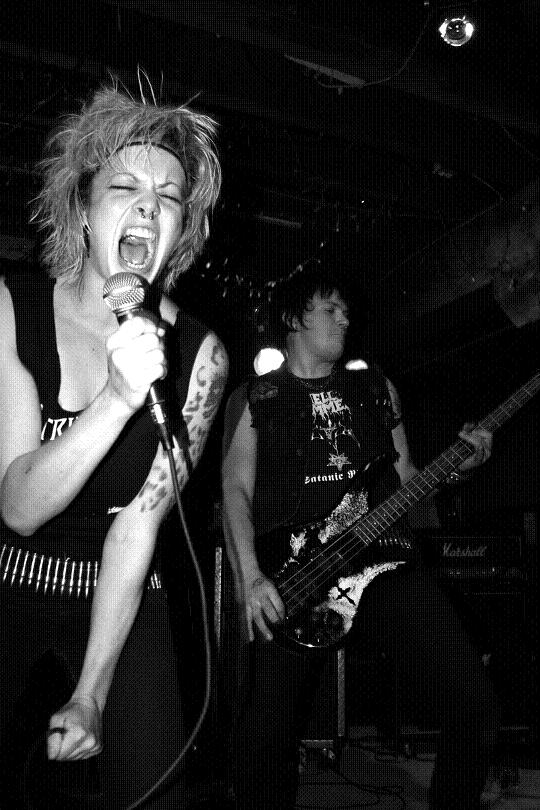 Richmond VA has always been known for it’s quality punk and metal bands. Anyone who frequents metal and punk shows in Richmond knows that crossover bands, which combine elements of metal and punk music into a powerful hybrid sound, are a staple at almost every local show. GWAR and Municipal Waste both brought this wonderful cross-pollination to the nation and the world with their goofy, thrashy brands of punk-tinged metal and metal-tinged punk, respectively. Recently, doom bands like Inter Arma and Cough, as well as hardcore punk like Unholy Thoughts and Dry Spell, have also been making a name outside of RVA. As awesome as that is for the local scene, those bands represent their respective scenes, rather than a blending of the two–which is what makes the recent popularity of local crossover group Occultist so exciting. Not only does this band play thrashy, punky, hardcore metal that every fan of either genre can enjoy, they are down-to-earth people who appreciate heavy music of all genres, and are themselves big supporters of Richmond’s extreme music scene.

CLICK HERE TO READ THE NEW ISSUE OF RVA MAGAZINE! 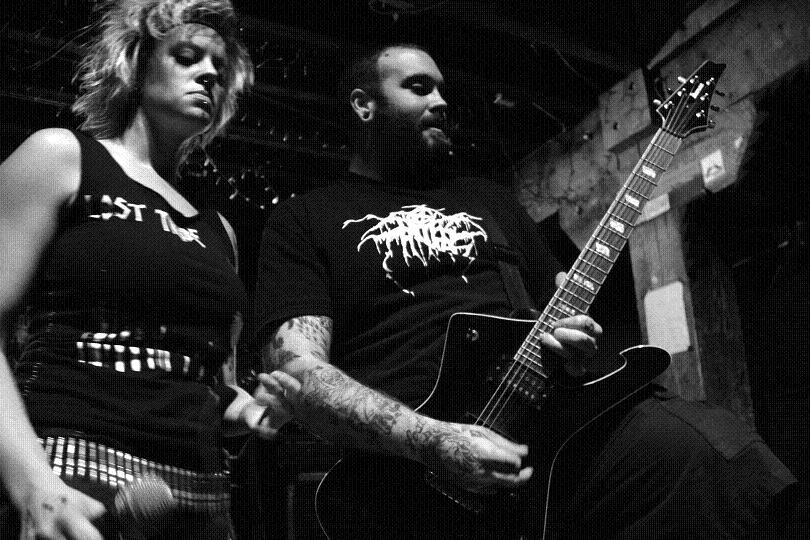 Occultist is made up of Leland Hoth on drums, Jim Reed and Ken Jung on guitar, Nathaniel Acker on bass, and Kerry Zylstra on vocals. The group started in 2009 in Jackson Ward, and have since been forced to acquire an actual practice space due to the fact that the neighbors found them “brutally loud.” Zylstra is the newest member of the band, having joined in 2010 when Will Towles, their original singer, left the group.

“I had seen Occultist play quite a few times and and loved their sound,” says Zylstra. “I was also friends with the other band members and it had been a long-term goal of mine to front a punk/metal band.” Zylstra’s dynamic stage presence and abrasive shrieks gained the band even more attention, and they began getting booked for more shows and bigger events. Although the presence of an attractive female frontperson seems like it might elicit some unsavory responses from small-minded fans, Zylstra says she hasn’t had to deal with too many jerks. “I do feel as though people focus on my gender quite a bit, but I haven’t encountered any major negativity,” she says. Although she has had to deal with the inevitable sexist comments at bigger shows where the crowd isn’t made up entirely of punks and locals, the good has far outweighed the bad. 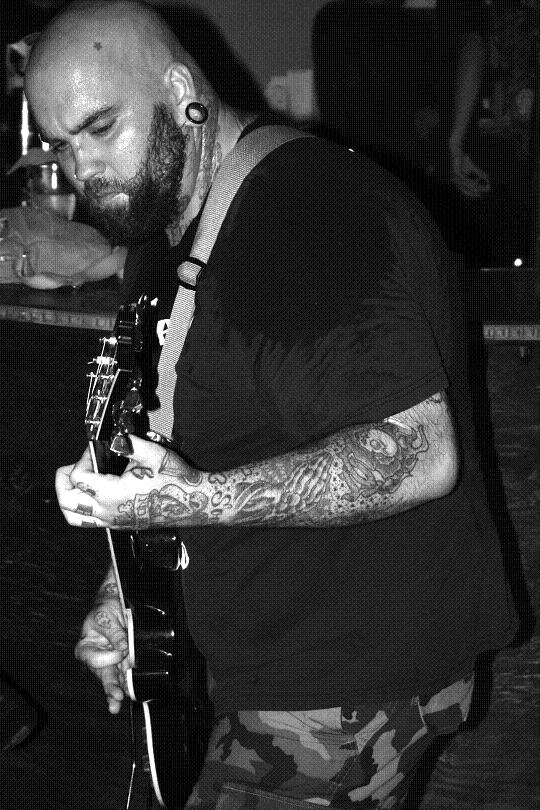 The band has also undergone some stylistic changes in the past two years. What started as a straight-forward punk/metal powerhouse has evolved into a far more complex musical project, with the guitarists focusing a lot more on melody and strong riff-writing. “There has always been a focus on musicianship, although admittedly the songwriting has definitely gravitated more towards the visceral and primitive aspects of punk and metal that Kerry’s vocal approach lends perfectly to,” says Reed. The group usually combines to write songs, and then presents the material to Zylstra, who listens to them until lyrical inspiration strikes her. Her lyrics are often dark and dystopian, with lines like: “Deaf to our cries, revenge ensues/ The cost of convenience: humanity dies/ A tortured planet turns on itself/ We writhe in despair” (“Gamma Tomb”). While this is usual fodder for punk bands, it is a far cry from darkly happy GWAR tunes or Municipal Waste party anthems,.

Occultist have been busy this past year in the studio and on tour, making moves to ensure their greatness in the annals of metal. Their latest EP, Hell By Our Hands, was recently-self released on tape, to the delight of many a classic format-snob. “We’ve always liked the mystique and sound of the old metal or punk demo tapes,” says Reed. “Since all of us have traded or collected tapes ourselves, it only made sense to have our first ‘official’ release in this classic format.” The slightly fuzzy feel of the recording does lend a very distinct credibility to a crusty metal release like theirs, but the good quality and actual attention to detail in the recording and producing of the EP, often purposely overlooked by punk bands trying to sound “raw,” keeps it far from the realm of novelty item. The band also went on tour with splatter-thrash legends Ghoul, no small feat for a three-year-old local band. “I met the Ghoul guys while working for GWAR,” says Reed, “gave them a copy of my demo, [and] months later Scott [Bryan] from Ghoul called me and said that they really enjoyed it and that the band they were taking along on tour broke up. I mentioned that we were available, and away we went.” The band was received well on the tour, and returned to a barrage of local bookings, including one at this year’s GWAR-B-Q–their second appearance at this local event. 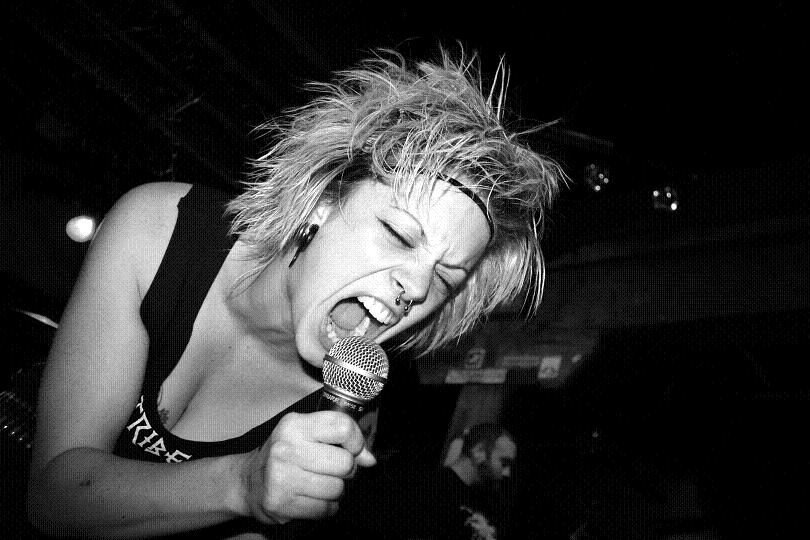 While the group has yet to get signed or achieve huge national status, they have made a great showing for themselves as a strong, up-and-coming local band. “I am flattered that there are those who feel that there should be a wider beam cast on our efforts, says Reed. “A lot of our friends’ bands garner interest nationally, but we don’t really focus on that. It would be great to hit Europe, Japan or Australia, but in the meantime, I think we’ll continue to handle things one day at a time and see where that will take us.”

Maybe it’s the combination of rumbling bass, pounding drums, and double-guitar riffing onslaught that makes the band irresistible to punk and metalheads alike. Or maybe it’s Zylstra’s uncompromising stage presence and unique voice. But whatever it is, Occultist have already established themselves as the emerging face of Richmond’s grimy underbelly, to the delight of headbangers everywhere.