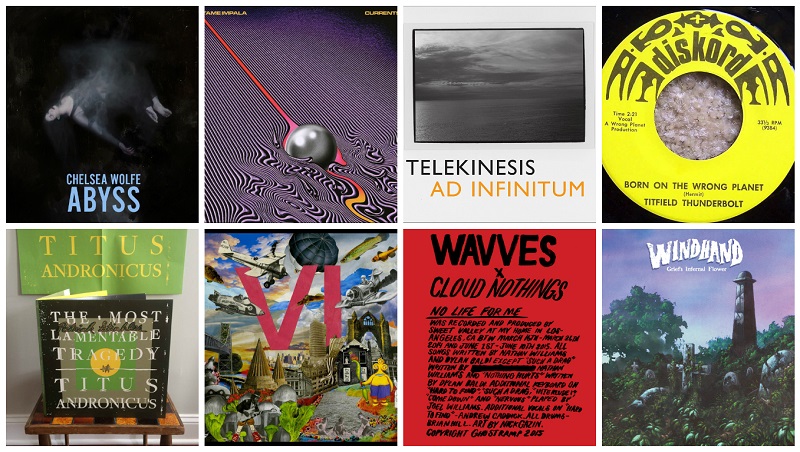 Tame Impala</strong>
Currents
(Interscope)
The Aussie pysch rockers’ third record is a stunning musical statement which delivers on its lofty ambitions and places the band in music’s true upper echelon. The album starts off strong with perhaps the best opening tracks in recent memory and continues as the overall sound continually modulates and evolves, rending you aurally stunned for 50 minutes. (DN)

Telekinesis
Ad Infinitum
(Merge)
As Michael Benjamin Lerner struggled to find inspiration for his fourth album, he looked to the past in the form of vintage synthesizers to help him expand and further his now-formulaic approach to songwriting. The result is a record full of familiar yet fresh musical ideas and sharp, evocative lyrics worth anyone’s time. (DN)

Titfield Thunderbolt
Titfield Thunderbolt
(Steady Sounds)
This double 7-inch EP is a bizarre and entertaining dispatch from the RVA underground circa 1970. Collecting the catchy “Born On The Wrong Planet” single and a few free-jazz/noise jams–all recorded live at RVA venues–it documents the endearing weirdness of this Beefheart/Zappa-damaged sextet, and contains a fascinating liner-note history lesson. (AN)

Titus Andronicus
The Most Lamentable Tragedy tit
(Merge)
Titus Andronicus have a reputation for melodrama, and this 29-song, 93-minute, five-act rock opera, complete with intermission, will do nothing to change that. Musically, it’s Clash/Against Me-style classic melodic punk, only with strong Springsteen influences, resulting in several lengthy, highly orchestrated epics. A tasty treat for fans and newcomers alike. (AN)

Toxic Moxie
Episode VI
(toxicmoxie.bandcamp.com)
After two invigorating EPs, it comes as no surprise that the concluding chapter of Toxic Moxie’s sonic trilogy would be just as fantastic. With songs like “A Simulation” and “86 Reality,” it’s remarkable to see how quickly this band has developed a unique spin on crusty glam rock. This release is a strong contender for best Richmond music of 2015. (SC)

Wavves x Cloud Nothings
No Life For Me
(Ghost Ramp)
This collaboration had been talked about for months, but its release was still a great surprise for an already stacked year. It’s hard to compare it to either band’s normal output, but it clearly excels at expertly combining the chaos of Nathan Williams with the melodic ear of Dylan Baldi into a package tailor-made for any garage fan. (DN)

Chelsea Wolfe
Abyss
(Sargent House)
Fittingly titled, this is Wolfe’s darkest, heaviest release yet. This album more fully explores the kind of music hinted at in her previous albums: dense drone atmospherics accompanied by borderline metal guitars and impactful drumming (electronic and acoustic) provide the backdrop to the radiant, yet forlorn singing Wolfe has become known for. Dreary folk tunes are interspersed throughout the harrowing descent. (CE)