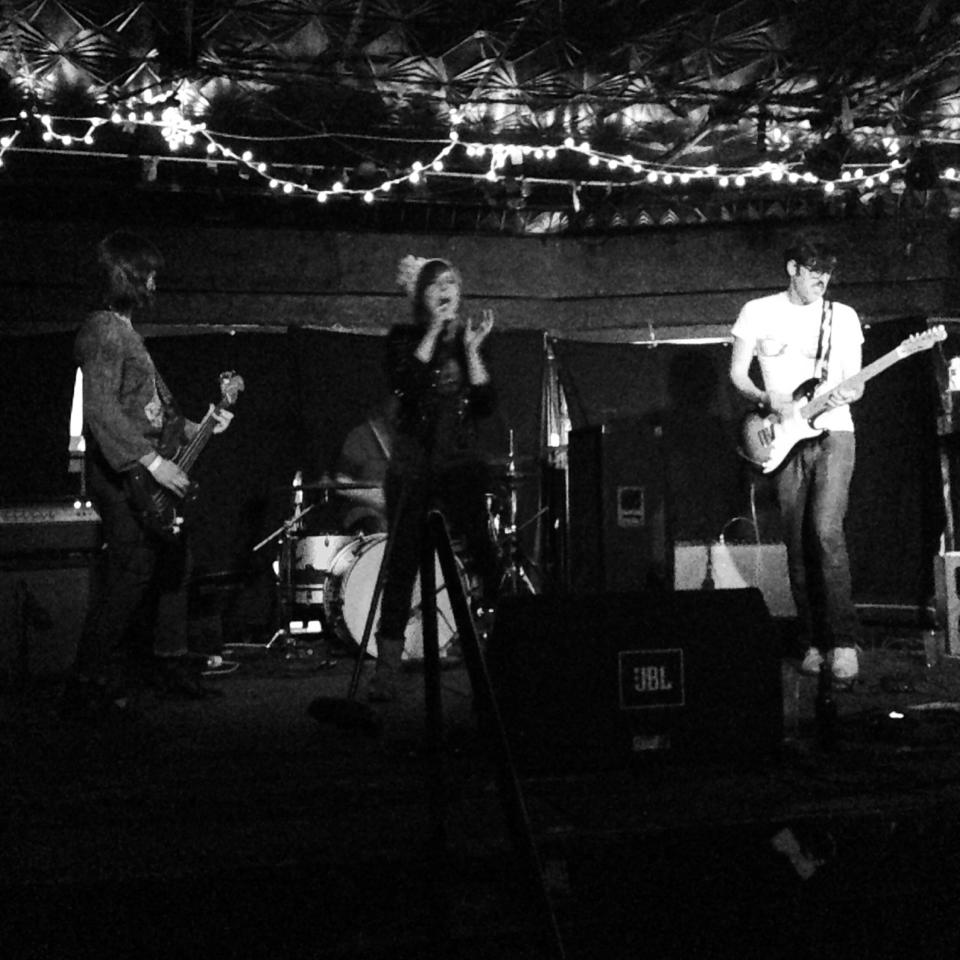 It’s an obnoxiously hot night in the city of Richmond, but the weather doesn’t prevent the city’s inhabitants from coming together to celebrate the local music scene.

It’s an obnoxiously hot night in the city of Richmond, but the weather doesn’t prevent the city’s inhabitants from coming together to celebrate the local music scene. An eclectic bill at Strange Matter has drawn a large, boisterous crowd that spills out the door. Brief Lives have just wrapped up; smoke breaks in front of the venue are accompanied by excited conversations, reflecting the growing anticipation for the next band to take the stage. The heralded group, Hot Dolphin, have created a reputation for themselves through exuberant and intense performances unlike anything else in Richmond today. When Hot Dolphin truly slays it, it’s practically a religious experience.

This article was featured in RVAMag #22: Fall 2015. You can read all of issue #22 here or pick it up at local shops around RVA right now.

Hot Dolphin started as most bands do in this city. After the breakup of their previous band, The Color Kittens, guitarist Robert Barrow and bassist Alison Hancock were performing as the duo Tyrannosaurus Awesome. Despite the fun nature of the guitar/drum duo, they felt a lingering desire to do something louder, and began discussing options for how to make that happen. “Robert and I were leaning towards wanting to get a bigger sound, and it was just something that the two of us [by ourselves] wouldn’t be able to pull off,” Hancock says. The two were quick to find Texas transplant Tim Falen, who’d moved here with desert-psych band The Diamond Center, for whom he played a standup drum kit. “Robert and Alison wondered if I’d be down for starting a band,” Falen says. “My only requirement was that I could play drums sitting down.”

The trio began rehearsing songs Barrow and Hancock had originally worked on as a duo. At this point, they were still not certain as to what direction the band was going to take. This is where singer Lindsey Spurrier came in. “Tim and I had just moved in together and he would mention how he was off to play music with Robert and Alison,” she relates. “My initial reaction was, ‘Tim is going off to play music with two of my best friends–I just want to be there.’ Eventually, I was invited to come hang out, and it slowly became an opportunity to be in a band with some of my favorite people.”

Hot Dolphin played their first show in 2012. The audience was eager to see their debut performance and the band didn’t disappoint. Their set featured a nice balance of new material and staples from the yesteryears of The Color Kittens. Hot Dolphin began performing regularly around town over the next few months. “When we started the band, we were discovering that it was a bit difficult to get shows around town. This led to us agreeing to play the majority of shows that were offered to us,” Hancock says. “Playing out that much helped us figure out our sound pretty quickly,” Falen adds. “For me, that’s always the fun part of being in a band that is starting practically from scratch. The trial and error of figuring out in a live room.”

As Hot Dolphin became a more seasoned band, Falen and Hancock were becoming one of the strongest rhythm sections in town. Their choice in varying rhythms and clever fills would certainly challenge the local music community. Barrow’s penchant for noisy garage rock and howling into the pick-ups of his guitar during particular songs helped contribute to the band’s frantic live performances–as did the lack of breaks between songs, never giving audiences a chance to catch their breath.

And then there’s Lindsey Spurrier. Anytime Hot Dolphin comes up in conversation, Spurrier’s performances are mentioned quickly. Her onstage antics, which often involved venturing into the audience mid-performance to ramp up the energy, set the bar high. As frontwoman, Spurrier becomes the possessed ringleader that completes the Hot Dolphin equation, ensuring fun is had by all and guaranteeing a rapidly growing base of fans who eagerly attend as many Hot Dolphin shows as they can.

The band set out to record debut EP Hotter Dolphiner in early 2013. Outside of his musical commitments, Falen has seasoned recording chops, which led to him engineering recordings of bands all across town and made it easy for him to record this first official set of songs by the band. The release, featuring fan favorites like “In Between” and “Lady Werewolf,” showcases the band’s garage rock sensibilities, and its lo-fi quality suits the group. Hotter Dolphiner was released on cassette by Bad Grrrl Records, a label featuring an eclectic number of Richmond acts such as Fat Spirit, Tungs, White Laces, and The Milkstains, among others. The label was founded by Tungs’ Ben Miller, who would later be joined on staff by Falen, who helped engineer the recordings and assist in cassette manufacturing.

Soon after releasing Hotter Dolphiner, the band was approached by North Carolina label Negative Fun Records about releasing a single on the label. “I was playing with Hoax Hunters at the time, and [that band] was in talks with Negative Fun about releasing a full-length with them,” Falen says. “[Negative Fun owner] Chris Defusco started checking out a few other bands in town, and was pretty excited about working with us.” The single, which was eventually released as part of Negative Fun’s 2014 Singles Club series (also featuring an EP by RVA’s own Positive No), would feature two new songs, “Bodysnatcher” and “Paint Dry,” and an old Color Kittens tune entitled “Cat Sweaters.” “We have moved away from playing a lot of the Color Kittens songs that [originally] stuck around in our set, but ‘Cat Sweaters’ has always been a blast to play,” Hancock says. The band’s assocation with Negative Fun not only resulted in an EP and increased regional attenion, but even led to them making an appearance at last year’s Hopscotch Festival as part of a daytime label showcase.

Things were looking bright for the group until Barrow announced to the group that he was planning on departing. This put a lot of things on hold. “When Robert told us that he was planning on leaving Hot Dolphin, we were supportive of the decision and started to think of what the continuation of the band would be,” Spurrier adds. It wouldn’t be easy to replace Barrow. His unbridled energy on stage and creative approach to songwriting certainly helped in shaping the Hot Dolphin sound. Thankfully, a short search led the band to a fairly obvious choice replacement, drawn from their close-knit network within the Richmond music scene.

Ben Miller was obviously a fan of the group from the get go–after all, he’d released their first EP. “I remember seeing early shows of the band and really liking it. It seemed like they quickly came into their own,” Miller says. “It came up that they were going to need a guitarist, and I was immediately interested.” Miller’s first show with the band happened early in 2015 and the dynamic of the group changed in a fascinating way. “Robert and Ben have two really different approaches to playing guitar, and they both fit with the Hot Dolphin sound,” explains Falen. “With Ben, we found that he engaged us to really start writing a bunch of new material. That was exciting to all of us.” Their latest material definitely represents a new approach for the band. “Whenever you are writing together and you have four unique perspectives [on] what music appeals to them, there is always going to be a crazy mix of ideas at play,” Hancock says. “It’s inevitably going to make some songs a bit stranger than others, but I don’t think Hot Dolphin has ever really been an easy band to pinpoint,” Falen adds. “You are looking at four people that come from a bunch of different scenes, whether that’s pop-punk or metal or hardcore, and finding the balance between all of those genres.”

As the band grows used to their new lineup, Spurrier sees a shift in the band. “We played a show with Screaming Females a few months back, and Marissa [Paternoster] even mentioned that a lot of our songs seemed to come from a darker place.” “In the past, [we had] songs that Robert or I would bring in, and they would be pretty figured out up to that point,” Hancock says. “With these new songs, we are figuring them out from scratch.”

In spite of all the upheaval, though, Hot Dolphin remains a band driven by strength and confidence. “I think the last year for the band has been a challenge and a lot of our new songs reflect that,” Spurrier says. “It got to a point where for me personally, I wasn’t as concerned about how people would react to the songs. I wanted to make sure we were still having fun as a band and that the songs we were working on were the songs that we wanted to be writing.” “That’s always been the weird nature of the band,” Falen adds. “It feels like we could be running full speed ahead and possibly on the brink of self-imploding. Part of that energy is what drives the band to still be a band though.” “We’re also getting older and just trying to figure out what our expectations as a band are,” Hancock chimes in. “Do we want to be touring? When we get around to making a full-length, what are our goals for that? It’s what you can expect when you have been a band for a while.”

Despite looking ahead with uncertain eyes, Hot Dolphin have always thrived in these sorts of circumstances. “Even if we are all coming from different places, we are all still drawn to this project, and that enthusiasm is what keeps us afloat,” Hancock says. “The songs that we have done in this band are easily some of my favorite that I have been a part of,” Falen adds. “I have no clue what the future holds for this band, outside of us working on this new material and seeing where it leads for us next,” Spurrier says. “If it were to all end tomorrow, I think we would all say that we are grateful that people took a second to be a part of this thing.”

Update: Hot Dolphin announced via Facebook that they’ve broken up. We wanted to keep this up here still though. Thanks for the tunes, folks.

Hiss Golden Messenger's music may be hard to explain in a single sentence, but as bandleader MC Taylor tells us, that's entirely... READ MORE

Hiss Golden Messenger's music may be hard to explain in a single sentence, but as bandleader MC Taylor tells us, that's entirely... READ MORE