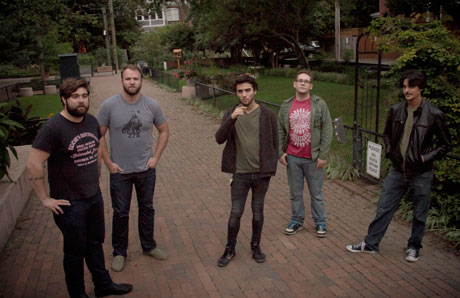 Lightfields may seem like a typical up-and-coming Richmond band to those who are just hearing of them this year with the release of their debut full-length, Junior. In truth, though, these young musicians have had quite a journey to even get this far. However, they’ve never allowed their aspirations to dwindle. From the initial junior high meeting of singer/guitarist Coldon Martin and guitarist CJ Rosati up to the current triple-guitar lineup, Lightfields are a sum of all parts–an idea that still reinvents itself with each new performance and recording session. It’s easy to understand why they have established an intense local following in the five years they have been a band.

“CJ and I started playing music together in eighth grade,” Martin reminisces. The two quickly discovered a common interest in similar bands, as well as their complementary approaches to playing guitar. “I was impressed that Coldon could play a song from start to finish while singing, and he would be impressed by my knowing how to implement a blues solo,” Rosati says. “We immediately realized that we needed each other.” Shortly after coming together, the two approached Austin “Tex” Marks about joining their outfit. “I picked up the bass around 2007 and started playing with them,” Marks says. “We were always friends first, but extending that to playing music was just great.” 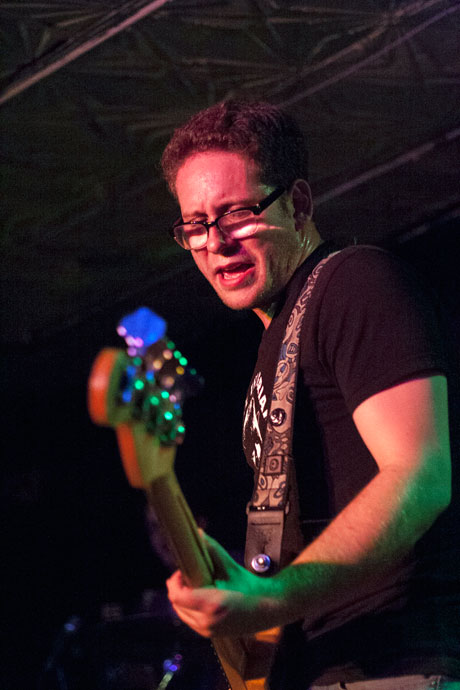 Lightfields made their proper debut at a house show in November of 2009. The group appeared on the local music scene at a tense moment in Richmond history. With the recently passed noise ordinance leading to a crackdown on show spaces all over town, there was a new risk to putting on shows in private places. When they were able to take place, they were that much more special. Amid that atmosphere, Lightfields began establishing close ties with other performers around town, including 6 Track Amateur, Toxic Moxie, The Northerners, Bandrew, and several others. “We are so fortunate to exist in this scene where so many different kinds of bands can strive,” Martin says. “It’s a privilege, and it constantly makes us feel challenged to be better at what we do,” Marks adds.

The original incarnation of Lightfields feels like ancient history now. “It can be difficult to describe specific eras, because everything has felt like a gradual build,” Martin explains. “There was a point where we [had been] playing together for so long that we began to wonder what we were aspiring to do. That helped us start taking what we were doing a bit more seriously,” Rosati says. This is when the band began to record the earliest versions of their set. “None of that ever saw the light of day and it probably shouldn’t,” Marks jokes. “We were such a different band at that point,” Martin says. “We were implementing saxophone as a melody foundation point.” This situation had come about due to a meeting with Ganesh Sarma. “I remember him approaching us and being like, ‘You have guitars and I have a saxophone, let’s do this,’” Rosati says. Sarma’s participation in the band lent an experimental nuance to the material. Sarma departed the lineup in 2013; however, his contributions had a lasting effect on the band’s sound as it developed.

Between Martin, Rosati and Marks, the core of Lightfields had been established. However, the early days of the band featured a seemingly endless procession of quickly-departing drummers. “With each drummer, it’s been one step closer to the sound we wanted to develop,” says Martin. However, the band didn’t really get where they wanted to be until fate led them to Cre Moore. “Cre was a perfect component to us just trying to achieve this bigger sound,” Martin explains. 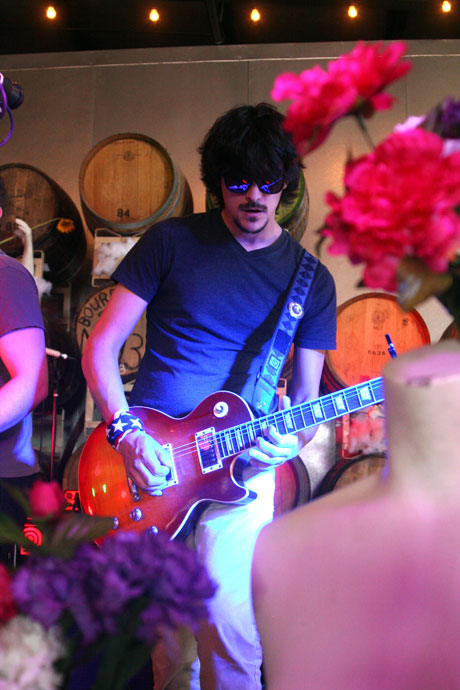 With a solid drummer in tow, the band headed to Snake Oil Recording to work with Daniel Deckelman on their debut full-length, Junior. “We took about four and a half months to record the album, and that’s usually the way it is with Lightfields,” Martin says. “We never feel like we are in a rush to get to a particular place. If it takes a while, we will take our time, because we want to do it right.” The enormity of Lightfields’ choruses is one of the most immediately noticeable elements of Junior. Spending several years playing local shows made an impact on the band, teaching them what resonates with people and allowing them to craft songs that will live on in the minds of their audiences long after they’ve left the show and headed home. Mastering this anthemic quality in order to make the maximum impact in a live setting gave Lightfields a powerful set of tools to work with when crafting their debut album.

The band thrives on collaboration, and in that spirit, Junior features several guest appearances, including the brief return of Ganesh Sarma, who contributed saxophone to “Better.” The collaborative approach had a positive effect on one song in particular. “If I picked a single track that stands out to me on the record, it’s probably ‘Backseat’,” Rosati says. The track features Goldrush upright bassist Matt Gold, which provided a thrill for the band. “It was just amazing watching him construct his part, and the results were killer,” Rosati continues. “Our friend Tiffany Meehan [also] came in to sing, and it just makes the song so much fun. It’s funny, because we rarely play it live. Yet it still holds a particular memory of the whole experience of making Junior.”

Deckelman’s efforts as producer also had a strong positive effect on the final product, as did the Snake Oil studio. “I loved the architecture of the space,” Marks says. “There was no recording booth. Dan is in the room with you while you are playing and working along with you. It’s a great collaborative effort, and he felt like a humongous part of the sound we got on this record.” The band plans to continue working with Deckelman on future releases. “His work as an engineer was perfect to us and once you lock that in, what’s the use of changing that up? With a lot of the new songs we are working on, we will probably end up venturing back to Snake Oil,” Martin says.

With Junior complete and the band feeling rejuvenated, they started to contemplate further lineup changes. “When we went in to record Junior, the guitars were just Coldon and me. As we started layering the songs, we figured it might be time to add more guitars to the band,” Rosati explains. Soon, the band encountered Daniel Carlisle, and swiftly recruited him as a third guitarist. “I had just moved to town and wanted to play with anyone,” Carlisle says. “Lightfields was a good fit, despite me constantly questioning my role in the band.” The rest of the band was not so conflicted about Carlisle’s inclusion. “Dan is great in that he hears an idea that was present in a song from the record and throws his own spin around it, in a way [none] of us could have conceived,” Martin explains. “Coldon and I have been playing together for so long now that having a new voice in the mix pushes us to think about songwriting in a totally different way that I don’t think we could have without Dan there,” Rosati adds. 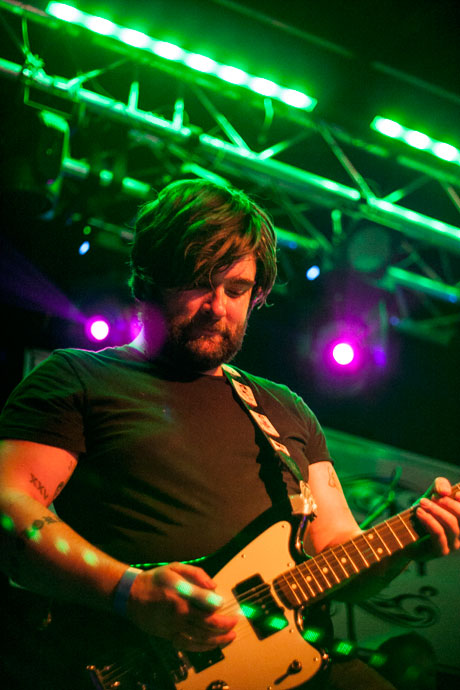 With a solidified lineup and a full-length album in the can, the band began considering the idea of tour. However, they soon arrived at an unusual conclusion. “I don’t think [tour] is really immediate on our agenda. We aren’t done with all the things we can do around town,” Martin says. “When bands are dead set on having to hit the road by a certain time or season, I don’t really share the same sentiment,” adds Moore. “If you think about it, we just put out a record and added a new member. We still have a lot of opportunities ahead of us, and that’s exciting to all of us. We just don’t feel obligated to be on the road.” The deliberate pace of Lightfields’ career thus far also plays a role here. “We started all of this as kids in middle school and then honed a sound for close to five years,” Martin says. “It’s amazing to think of how this continues to remain exciting to all of us.”

The future of Lightfields is bright and the city appears to be raving over the release of Junior. While touring may not be on the agenda, new music will be on the way in the form of an EP the band hopes to release in early 2015. It might turn out to be their best work yet. “With some of these new songs, I think we just getting better and better,” Marks says. “We are looking forward to just getting back into the studio and seeing what else we can pull off,” Martin adds. In the end, the band are honored just to have the fans they’ve accumulated over the past several years. “There are so many incredible people that have supported us from the start,” Martin says. “We can’t really ask for anything more.”

This article is taken from the latest print issue of RVA Magazine, out now. To read a digital version of the full issue, click here.