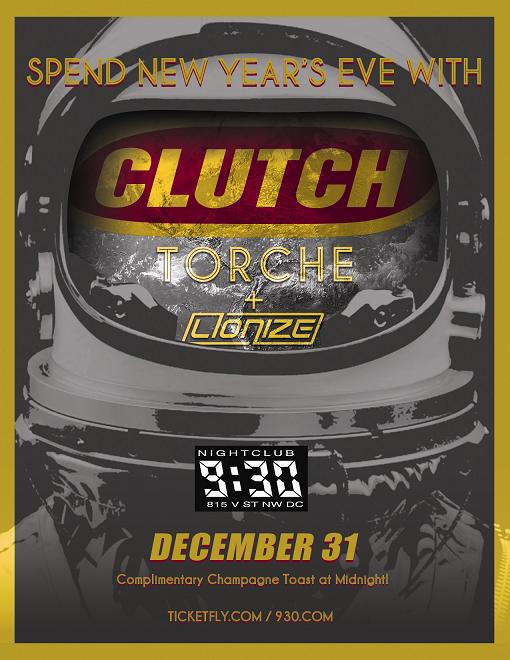 Spend your New Years Eve with Clutch at the 9:30 Club (ticket giveaway!)

This should be a hell of a party. Clutch is celebrating New Years Eve this year with a live extravaganza at the 9:30 Club, complete with a complimentary champagne toast to ring in 2015 at midnight–and you could be there enjoying it with them!

This should be a hell of a party. Clutch is celebrating New Years Eve this year with a live extravaganza at the 9:30 Club, complete with a complimentary champagne toast to ring in 2015 at midnight–and you could be there enjoying it with them! Clutch is just recently finished with the tour for their epic tenth album, Earth Rocker, and word has it they’re getting to work on a new one already. Whether you’ll get to hear any new jams at this show is therefore unknown, though honestly, if all you get is a selection of Clutch’s best material from the last two decades of Pure Rock Fury(TM), that’s not exactly anything to complain about, am I right? This pro-quality video of a full live set from Clutch’s Earth Rocker Tour appearance in Demver this past November is not only a great argument for the value of the internet but a lovely sneak preview for what the band will have in store for you this New Years Eve:

They’ll also have opening sets on tap from their friends in Torche and Lionize. Torche will be releasing their new LP, Restarter, in February 2015, so you can expect a mixture of brand new and tried-and-true tunes from these powerful purveyors of super-catchy stoner metal. Meanwhile, Lionize, an organ-driven reggae/metal hybrid with a Deep Purple-meets-Bob Marley sound, will open things up–and may even be joined by their friend and occasional collaborator, Clutch guitarist Tim Sult (though we’re not promising anything, so please don’t quote us!). Overall, it’s going to be a great night, and as beginnings of a brand new year go, you could do a whole lot worse! So make it an auspicious beginning to an awesome year and join Clutch at the 9:30 Club on New Years Eve–you won’t regret it!

And guess what–you could enjoy this awesome party completely free of charge! Your pals at RVA Mag have a pair of tickets to give away to one lucky winner–who just might be you if you play your cards right. Just plug your info into the box below, and keep an eye out for extra chances to win. Enter by Friday at noon, because at that point we will close this shindig down and pick a winner! May the best reader win.

THINGS YOU SHOULD KNOW ABOUT THIS GIVEAWAY: All tickets are non-transferable. Winners will be announced on twitter and facebook. Keep an eye out for an email notification that you’ve won–it may go to your spam, so check there before you just empty it out!