Steel Panther's Lexxi Foxx chats about touring in VA, 80s nostalgia and glam metal ahead of their show at The National 10/9 - RVA Mag 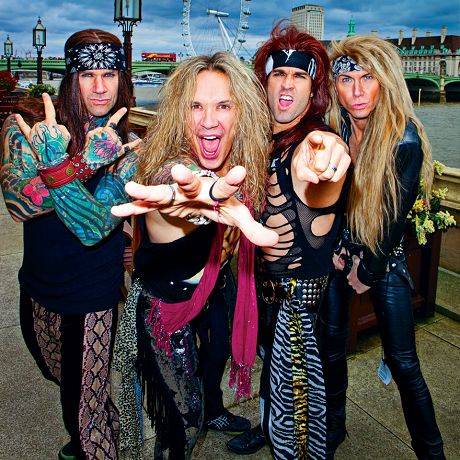 Anyone that was alive during the ’80s has likely experienced a sense of deja vu recently.

Anyone that was alive during the ’80s has likely experienced a sense of deja vu recently. The US is having problems with Iran, Scorpions released a new album, and movie-goers are obsessing over the new Star Wars, Terminator, and Mad Max movies.

While the ’80s mean more to some people than others, there’s no denying that a little part of that decade remains in all of our hearts, whether you were alive then or not. Regardless of how many ’80s heart-strings you have, Steel Panther fully intends to shred on them when they come to The National on October 9th.

Hailing from Los Angeles, Steel Panther is a glam metal quartet in the tradition of Van Halen, Bon Jovi, Poison, and Guns ‘N Roses. Featuring vocals by Michael Starr, Satchel on guitar, Lexxi Foxx on bass guitar, and Stix Zadinia on drums, the band has played sold out shows across the US and around the globe, including a main stage appearance at 2012’s Download Festival. Their third studio album, All You Can Eat, was released last year, and the band is currently preparing for a US Fall tour.

“We are super stoked to be in Virginia again, we really are,” Foxx said. “It will be the first leg of us playing again.”

In addition to their Oct. 9th show in Richmond, the band also has an Oct. 8th show in Norfolk at the NorVa.

“We’re going to be in Virginia for two days, so that’s plenty of time to fool around,” Foxx said.

Last time the band was in Virginia, good times were had, but at the expense of consciousness.

“Usually, we’ll have a meet and greet, then we’ll have some friends, or somebody that I know, or some guys from other bands, they’ll go, ‘These two chicks want to meet you,’ and after that, with a couple of the connections we have in Virginia, I pretty much forget, but everyone told me I had a really good time,” Foxx said.

This year, Foxx plans to make memories that will last. “This time, I’m not going to be partying as much as I did last time, so I can remember a little bit more about Virginia and about exactly what’s going on,” Foxx said.

While some metal fans argue that glam has no place in the pantheon of metal, Foxx insists that glam is still metal, and that it was born during metal’s zenith between the ’70s and ’80s.

“There’s all kinds of different metal, that’s what’s so cool about the 80s,” Foxx said. “Even though we’re not as heavy metal as some bands are, we’re still bringing back a time where heavy metal ruled, and glam metal ruled as well.”

If anyone has any doubts about Steel Panther’s rock pedigree, they should seriously consider attending one of their infamous live performances.

“Usually when people go to a concert, they want to party,” Foxx said, “We don’t just stand there, we like to move around and do different cool moves together, and I think we dress different than other bands, so I think the combination of those just makes people have fun.”

Fun isn’t just a word, it’s a way of life for Steel Panther.

Partying non-stop takes its toll, however, and even professionals need a little time off.

“We’re getting older, we’re doing a bunch of gigs and things like that, so we’ve got to make sure our knees are still working, and our elbows, and shoulders, and then we have to get Botox cause we’ve been partying a bunch,” Foxx said.

A little makeup goes a long way, too. “ Make-up helps a lot, for all four of us,” Foxx said. “Makeup is foxy…chicks dig dudes that are foxy. That’s why dudes do music, just to get chicks.”

But just like every night has its dawn, it’s only a matter of time until Steel Panther hits the road again.

“My mom’s sick of me being in the house and having parties, so I need to take it back out on the road for a little bit, so I’m excited,” Foxx said.

Though they’ve played arenas and festivals, Foxx said the audience is one of the few cases when size doesn’t matter.

“I could care less if there’s 12 people there or 1,200 people there, as long as they’re there to have a good time and listen to our bitching tunes, that’s all that really matters,” Foxx said. “I do have to say this, though, if there’s just going to be 12, I’d hope that they would all be chicks.”

Of course, Foxx hopes there will be more than just 12 people at The National in a few days. “We hope that we can hang out with whoever has drugs, or any hot chicks,” Foxx said. “It should be a good show and I hope to see everybody there.”

Steel Panther will be bring their glam metal to The National this Friday October 9. Tickets and venue info are available here.