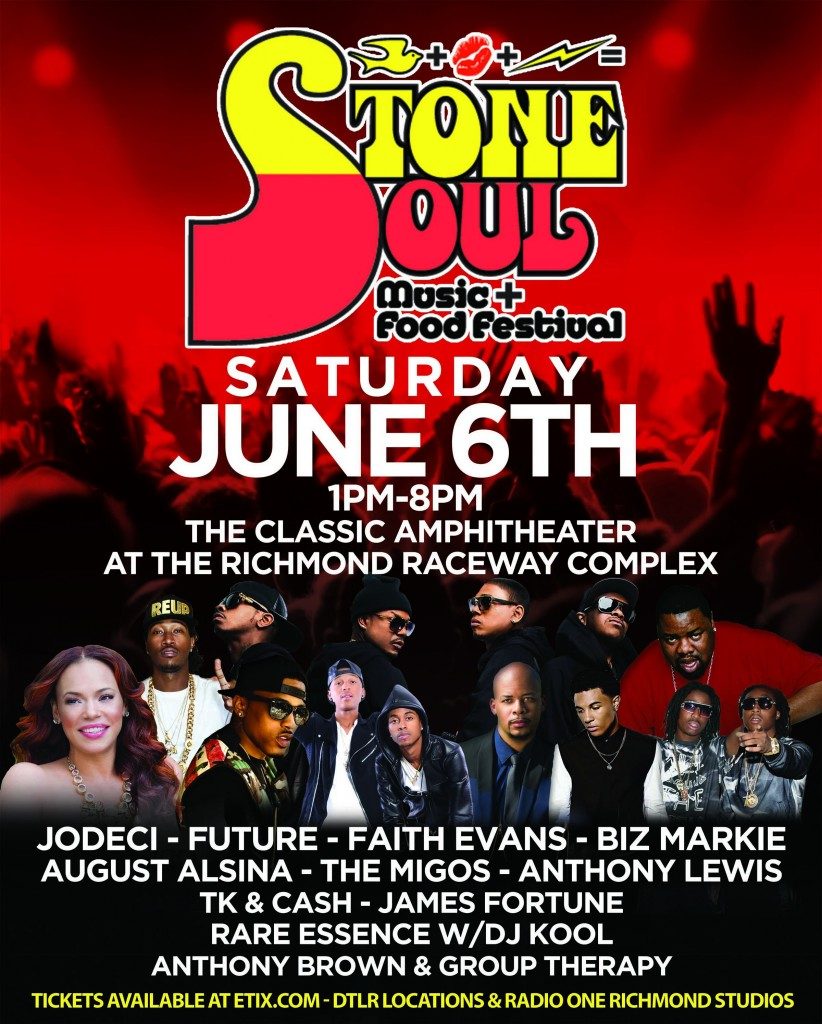 This Saturday (June 6) marks the 11th Annual Stone Soul Music and Food Festival at the Richmond Raceway Complex. Stone Soul is one of Richmond’s premier music and food festivals, geared toward fans of gospel, hip-hop, and R&B. Stone Soul is part food festival, part music revival (the covered raceway gives it a big tent feeling), and part family reunion. Since the Radio One network stretches across several local radio stations: iPower 92.1, KISS FM, and Praise 104.7 FM, being some of the biggest, Richmonders will be able to see some of their favorite radio personalities like Community Clovia, Paris Nicole, King Tutt, Sheilah Belle and Cam Cooper all working together for the event.

This post originally ran on The Cheats Movement Blog, check out more from Mark Cheatham here

This year’s music line-up is R&B heavy with a focus towards a more mature audience (35 and up), yet there are a couple artists that will appeal to the below 30 crowd (namely Future, Migos, and August Alsina). Here is a breakdown of the music headliners at Stone Soul 2015:

There is no other way to say it, Jodeci is back. They have a new album, The Past, The Present, The Future, new video, and their first Adult R&B number 1 single in 22 years. But the reason that I’m calling Jodeci the Wild Card of this year’s festival is because no one cares about the new material, not one bit. Jodeci fans long for the past and want to know if they can deliver the hits that made them famous. I’m talking about “Come and Talk To Me” I’m talking about “Forever My Lady,” I’m talking about classics. If they can deliver those with the same talent and passion of 1992, then we will be in good hands. If not, we may have a problem.

Well 1992 fans, just in case we get the Jodeci that has Mr. Dalvin singing lead, yes it has happened and not too long ago, there is still a 1990’s hit maker for you that I know will be solid as a rock. The former First Lady of Bad Boy Records, Faith Evans will be at Stone Soul to deliver her hits like “You Use To Love Me” and “Soon As I Get Home.” There is no doubt in my mind that Faith will be as solid as Jodeci will be unpredictable. If you were born a fan of 90’s R&B, this is your section of the show. The only question I have is where is Total.

Future (Eye Candy for the Ladies)

This year Future returns to the Soul Stone stage. He also has a new album Honest and one of the hottest (and most remixed) songs of the summer “Commas.” I saw Future rock the Stone Soul stage in 2013. It was there that I saw just how much appeal he has with the ladies. Back then, most of Future’s popular songs included features by rappers that were not in Richmond, therefore, he really couldn’t complete a full song. I am certain his set will be more complete this year as he has now showed the ability to carry songs on his own.

August Alsina (Eye Candy for the even Younger Ladies)

The 22-year-old Def Jam recording artist from the NOLA has truly taking the industry by storm. Along with Ty-Dollar Sign, Alsina became the first R&B singers to ever by included on XXL’s freshman cover, expanding the field from 10 to 12. His debut album Testimony, released in April of last year, has gone platinum. And he won Best New Artist of 2014 at the BET Awards. He’s got a loyal legion of young, mostly female, fans and shows no signs of slowing down. He recently has been doing tour dates with VA’s own wild man Chris Breezy. We’ll see what he has in store for the RVA crowd.

Two-time Grammy award winning gospel artist and radio host James Fortune will perform songs from his new album Live Through It. For those who don’t know, the gospel portion of the festival is normally one of the most powerful. I’ll never forget two years ago when Tamela Mann shut down the entire raceway with “Take Me To The King.” Fortune is more than equipped to have church on a Saturday.

As always, I’m looking forward to and inspiring day of music, food, and family. The community connection as Stone Soul is a positive aspect that is often overlooked and impossible to describe. Every year, I witness the connections of friends that haven’t seen each other in years, strangers are not strangers by the end of the 7 hour event, and you leave anticipating the next you can get together. Stone Soul is a annual must-attend event for the Richmond community. #WESEEIT