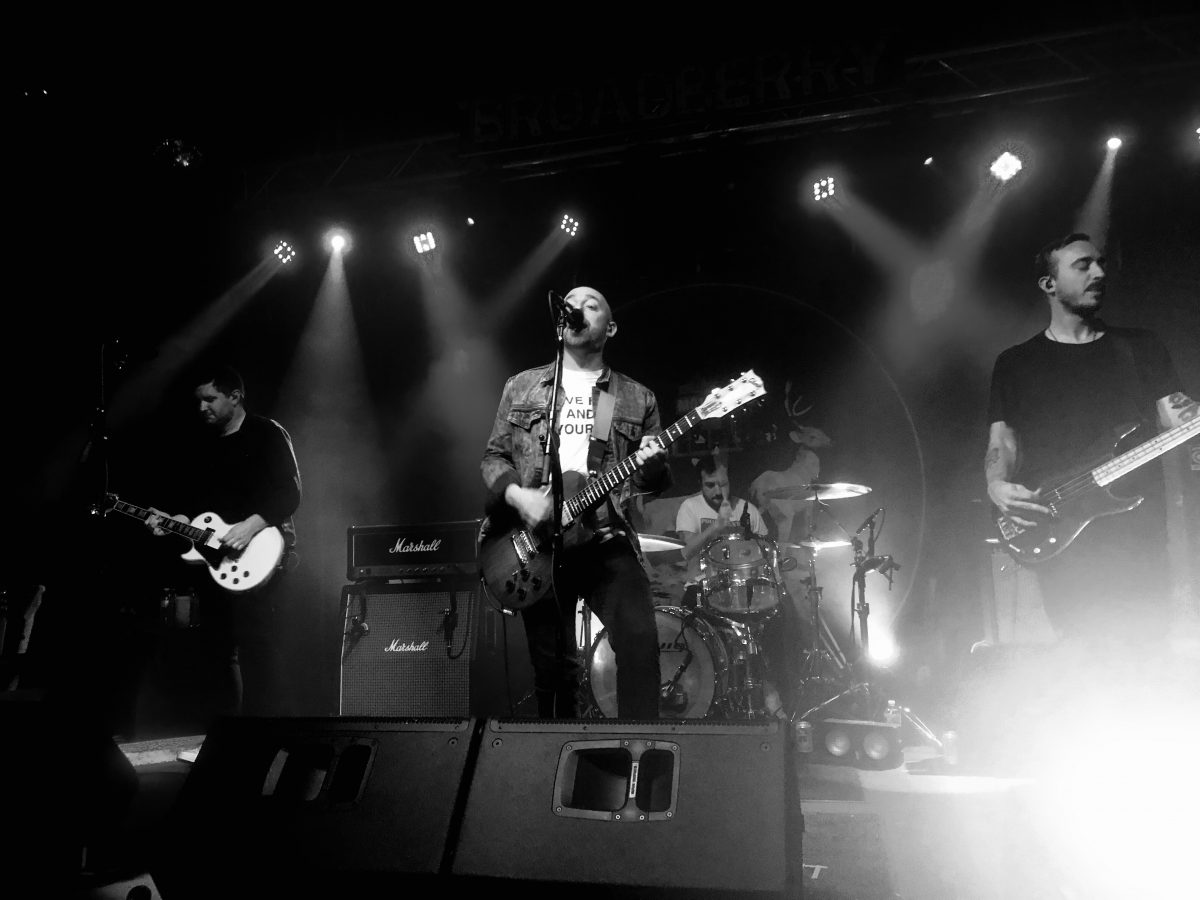 The Menzingers’ sold out performance at The Broadberry last week was a dream come true for true-blue fans of the veteran melodic punk band.

Those unsayable words that anyone with a favorite song has heard: “You know you’re not in the band, right? You know you don’t know these people, right?”

She’s smiling, but throws in, “Just making sure. Sometimes I worry.”

Driving hours to out-of-state concerts, scraping the skeleton of my bank account to purchase the tickets. It is within the realm of logic that someone would check in now and then to make sure I’m still aware of my actions. It is now a joke amongst friends and family, what I’ll endure to see the music I love, and The Menzingers are no different.

It’s true, I don’t know any of my favorite bands personally. It’s specifically true of The Menzingers — four men with invisible hands and tangible sounds, dragging me through my twenties, propping me up against the cliff of thirty, where I hope to continue my climb.

Climbing implies that I’m going uphill, and continuing requires promise of a peak. It’s December 3rd, 2019 and Richmond sounds off a psychotic howl from its inner-city mountain range. I answer with a long-predetermined promise to see, hear, and feel The Menzingers.

The air runs in crisp circulation. Christmas decorations hang off the balconies, but there’s trash skittering down the one-way road off of Broad Street. It’s 6:55 at night, and doors open at 7. The bouncer is distributing orange wrist bands with such a comical lack of enthusiasm it makes me question why I came here.

There are ten or fifteen people in front of me, and they look beautiful. Studs. Eyeliner. Cutsandpatchesandripsandpins. A scene I can never keep up with, though I pursue with desperation. A look designed to seem disheveled, but I’ve found to be quite the time commitment. Richmond. A city where even the most advantaged can find chips for their teeth — and shoulders.

This is the first time I’ve been to The Broadberry, and standing under the gold marquee makes me feel like I’m walking into a gift at the exact moment someone opens it. It’s a small venue; there’s a security guard crocheting in the corner by the stage barriers. A mom walks up to her daughter (I’m assuming) who wears black skinny jeans under her hip bones and fishnet tights up over her belly button.

“Good?” She asks earnestly, holding up a fresh band tee. The skinny yellow-haired girl reviews it with solemn fervor, then breaks into a huge grin, nodding. The mom throws the shirt back over her shoulder, dissolving towards the back of the room.

The music begins with Culture Abuse, deviant and fun. The lead singer closes the set with: “We shit in that toilet out there too. We are all in this together.”

The room ignites in warm harmony as the lead guitarist and keyboardist of Tigers Jaw command the room with sanguine precision. The transition from one song to the next becomes ambiguous, and the band members smile hearing the lyrics ringing out of the crowd. Their songs make so many mentions of pushing away, so I would ponder how they pull us into suspended orbit with a magnetic demand. The Menzingers are next, my inner monologue is bracing for machine gun fire.

The stage darkens and hysterical yells ensue as the chords ring out, calling masses to worship. I smile with deep resonation as “Anna,” the opening song, ends and they push us deeper into pathos with “The Obituaries.” Closing my eyes, singing, “Yeah, I’m just freaking out, yeah, I’ll be fine,” I make an amateur attempt at telepathy, willing fellow Menzingers lovers not in attendance into the room with me… It was worth a shot.

The set list could not be more empowering. “Last To Know” holds up as my favorite track off of their latest album, Hello Exile, and they follow the album’s song sequence by cruising from it straight into “Strangers Forever.”  It is a delight to throw my hands up and carry the crowd surfers to the front, towards the band.

Shimmying through the song “Lookers,” The Menzingers bid the room good night, leaving the stage in a gesture of ceremony. Pandemonium ensues as the crowd begs for their return, and they oblige in less than five minutes.

“Thank you guys so much — we’re going to play a couple more!” The words every concertgoer waits to hear. “In Remission” and “After The Party” are such special songs, and tonight I realize that this is a peak, one of many more ahead. Tonight’s unsayable word: “Promise.”