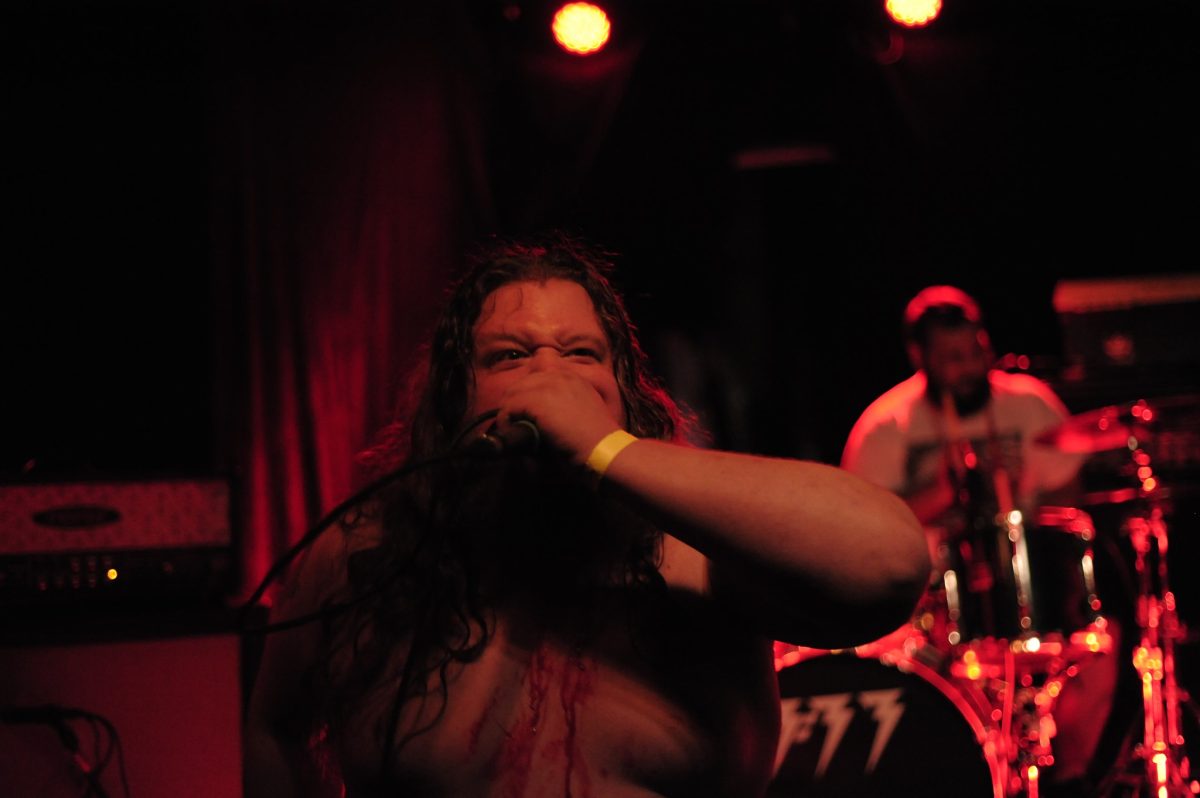 There used to be a crew of hardcore kids around the central Virginia area who called themselves the 333 crew, by which they meant they were “halfway to hell.” I don’t think those guys had anything to do with Richmond quartet 3:33 — they were metalcore dudes; 3:33 are more like metal-tinged hardcore punk — but I do think they’re both on the same page with the name they chose. With their new EP, Moon Maniac, 3:33 show that they’re at least halfway down the highway to hell; but, as AC/DC themselves will tell us, hell ain’t a bad place to be. At least, not when the music sounds like this.

The name of the Moon Maniac EP comes from one of the many nicknames given to early 20th-century serial killer Albert Fish, whose notorious crimes likely included many murders besides the three he was officially executed for, as well as rape, child molestation, kidnapping, torture, and a whole bunch of other horrible depraved things. 3:33 have long focused their lyrical themes on horror-related subjects, from their Swamp Cult split with Cremains back in 2017 to 2020 EP Jaws Of A Wolf‘s leadoff track “Curse Of The Devil.” However, this is the first time I’m aware of that they’ve focused their theme as directly on a real-life horror as they have here.

That horrified fascination with a particular real-life murderer shows up in the cover art as well, which was created by a local artist, Miranda Young, who shares the band’s interest in true crime. It also carries over to one of the songs on the EP, “Peanut Butter And Cider.” As drummer Palmer, aka Herb Grinder, explains, “The name ‘Moon Maniac’ was one of the several nicknames given to Fish. This song is a tongue-in-cheek narrative of the depravity experienced by one victim in particular that Fish had locked up and tortured for two weeks.” Palmer explains that the title comes from a euphemism Fish used to refer to urine and excrement, which Fish would feed to his victims. And yes, that’s a colorfully foul factoid, but the band credit Timesuck and Last Podcast on the Left as the sources for their info, so it’s not like they’re making any of this up.

This EP definitely sounds like it was written after a deep dive down a Wikipedia rabbit hole — and who hasn’t been on a few of those? “The Dark Side Of Light Beer” delves into the history of the Coors family, whose founder, Adolph Coors, either leapt or was pushed to his death from a sixth-floor hotel balcony in Virginia Beach. “Upon researching that event I found a few more black marks in the family,” Palmer explained. “Adolph Coors III, grandson of AC, was murdered in a botched kidnapping attempt in the 60’s, and in the 80’s a distant granddaughter of AC jumped naked to her death from a NYC apartment.” Not exactly a love train, am I right?

The punk rock side of 3:33 shows up on opening track “T.I.T. (Trust In Technology),” in which singer King Gilbo screams furiously about a variety of atrocities foisted by the powers that be onto a sadly apathetic public. Following in the footsteps of Jaws Of A Wolf‘s “No One’s Taking Your Job, Stupid” — my personal favorite of 3:33’s prior material — the lyrics to “T.I.T.” are a laundry list of terrible things about western civilization circa 2022. “Victimized by possessions we prize, products advertise nothing but lies, addicted — keeping up with the neighbors, algorithms track our behavior,” proclaims Gilbo, and I mean, where is the lie?

Musically speaking, this record follows in the pattern of previous 3:33 releases, in that it walks the line directly between raging hardcore punk and the sort of political death metal that was much more common in the dawn of the 90s than it is today. My immediate comparison points, befitting one of my advanced age, are Portland metallicrust legends Tragedy and death metal pioneers Napalm Death circa their career-defining 1991 masterpiece, Harmony Corruption. These days, it might make more sense to reference bands like Gatecreeper or Toxic Holocaust (whose frontman, Joel Grind, mastered this EP), but to my ears, there’s a raw garage-band energy here that takes me back to an earlier era. Considering I come from that era myself, I certainly can’t complain.

Moon Maniac is available now on a variety of streaming services, and can be purchased in digital form on Bandcamp.