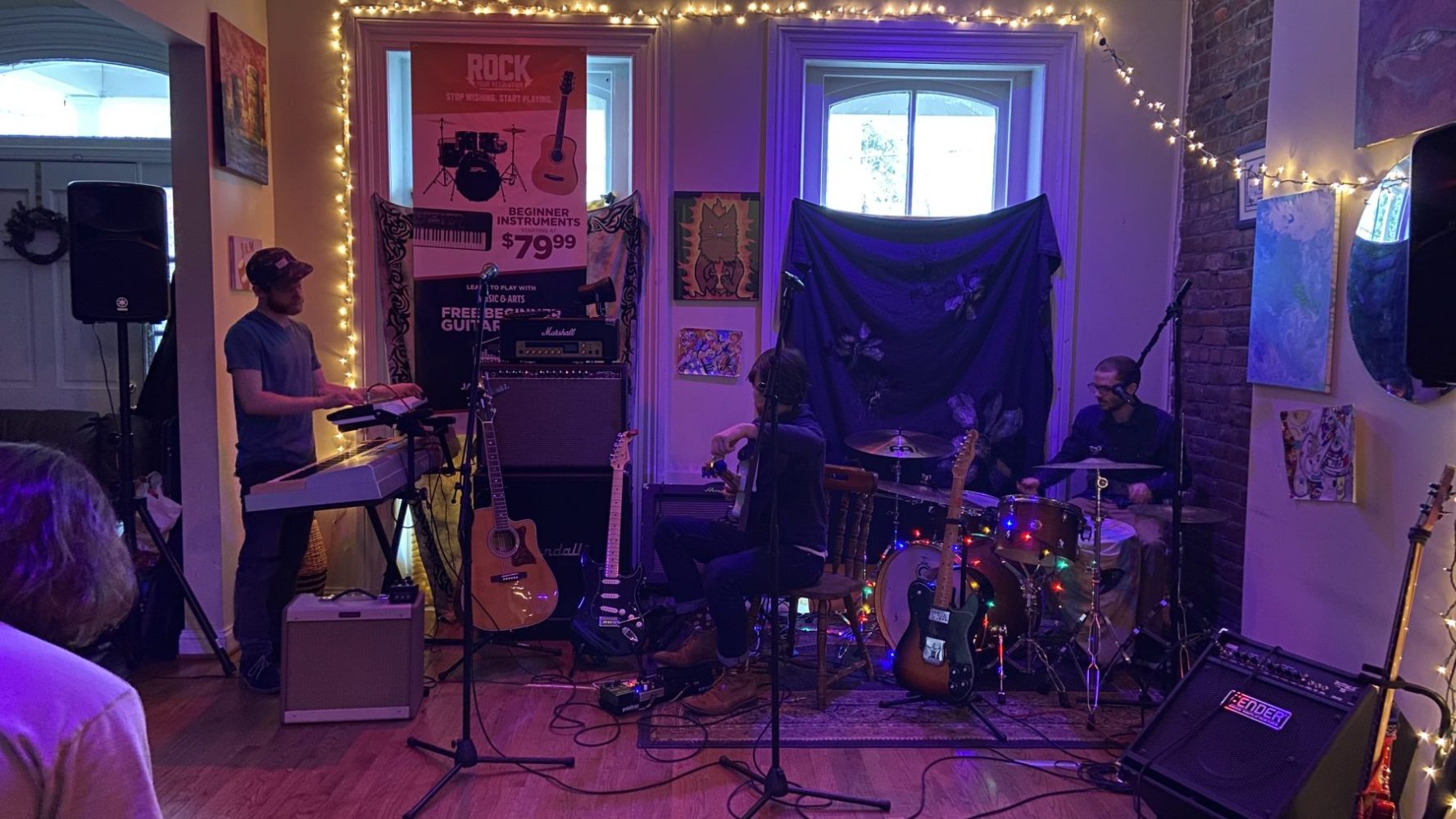 Sometime in late 2018 I was at a house show to see one of my favorite local bands, Plastic Nancy. There must have been over a hundred people packed into a tiny living room, with bodies spilling into the kitchen and outside onto the back deck. Sweat and smoke mixed with purple and green lights turned the air thick and hazy. Hair whipped around and drinks spilled as we all thrashed and bounced off each others’ shoulders, and as the music reached a fever pitch, everyone seemed to jump in perfect unison.

That’s when the floor caved in.

The night started out so normal. I bought two 40’s of Steel Reserve at The Mart That Doesn’t Card (if you know, you know). Sure, it’s the most disgusting swill on the planet, but damn if it wasn’t an efficient way to get messed up – and I had to get messed up. Even after a few months of going to these shows, actually talking to people was still terrifying without a LOT of liquid courage. As I walked over to Oregon Hill my ears focused on the rattling of the bottles in my backpack, and I did my best to keep my breathing steady. I passed St. Andrew’s Episcopal Church, crossed the street, rounded the corner down a back alley, and began to climb the rickety back steps of Plastic Palace.

As you might guess, Plastic Palace was the eponymous home of the members of Plastic Nancy. A lot of the houses that regularly host bands –“Mushroom Gorge”, “Casa de Gatos”, “The Rat’s Nest”, “The Egg” – have this brand of naming convention; one that evokes filth and wonder in equal measure. These colloquialisms are for more than just flavor, though, they serve as landmarks. If an address is broadcasted with every show announcement then that runs the risk of far too many strangers piling into the house, and therefore a greater likelihood that cops will bust the function. Instead, you have to seek out the address from either a member of one of the bands, or a regular who knows the address off the top of their head. Silly as it may sound, going to a house show feels like going to a speakeasy; that small thrill of being in the know. 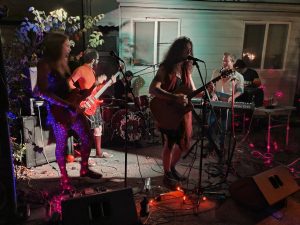 A band performing outside at a house show.
Source: Rachel Foeller

When I reached the top of the stairs, I realized I had made a rookie mistake; I was one of the first people to show up. Great, I thought, I’ve got at least an hour of avoiding eye contact ahead of me. The few people that populated the back deck glanced up long enough to give me some faint smiles of recognition, but quickly went back to their conversations. That, at least, was a little reassuring. Still, I relegated myself to a lone corner and drank my beer as quickly as I could muster.

Slowly but surely, more folks started to trickle in. Through the growing plume of cigarette smoke, I could see every color of hair under the sun: blood red, neon green, bleach blonde. Some people came in full punk attire with ripped tights and spikes on every surface. Some wore bell-bottoms and platform boots with open fur-lined coats. Others wore thrifted outfits so odd or cobbled together that they seemed to defy any concept of decadal time.

That’s when John DeGarmo, Plastic Nancy’s extremely talented guitar player, caught my eye. Up until that point I had always been too nervous to speak more than a few words to him, but when I swallowed my fear and approached him, I was met with a shy but friendly smile. I took the opportunity to gush about their music, and he seemed stunned and truly touched that I liked them enough to keep coming out every weekend.

Soon enough, we were excitedly chatting back and forth about the band’s influences. John was especially indebted to the psychedelic rock of the ‘60’s; Jimi Hendrix, Black Sabbath, Led Zeppelin, and, of course, The Grateful Dead. We bonded over that one in particular. Considering both our dads were huge Deadheads as teenagers, we felt that that bluesy, jam band style felt like it was built into both of our DNA. However, he explained, every member of the band brought different flavors to the table: from the surreal songwriting of Bob Dylan, to the laid-back surf rock of The Growlers, to the mind-melting punk rock of Bad Brains. It was a rare moment when I felt at ease talking to a new person.

As the night wore on, the bill proved to be as much of a mixed bag as the crowd itself. The first “band” to play was just one guy who used a soundboard and a truly staggering array of pedals to layer and modulate his voice into something truly maddening. Think Gibby Haynes from the Butthole Surfers, except he’s playing literally all the instruments. The next band was a four-piece from Fredricksburg who used just as many pedals, but to much different effect. Their sound was classic shoegaze with heavy reverb that put the room in a trance, like Cocteau Twins or Dinosaur Jr. The band after that was a girl group that had the high-pitched punk vitriol of Riot grrrl, but had a level of shredding speed and technique that suggested a lot of thrash influence, perhaps from Sepultura or Living Color. 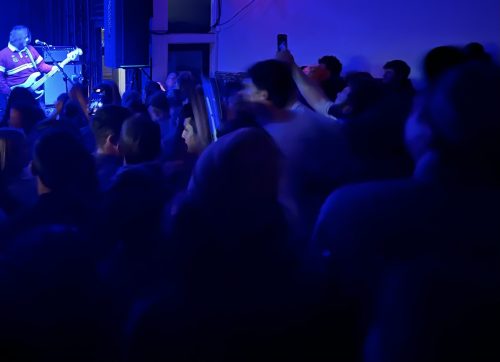 A typical crowd at a house show. Source: Andrew Bonieskie

Finally Plastic Nancy took the stage as the last act of the night. “Stage” is a generous way to put it – their instruments were squeezed into a cramped corner of the living room between their upturned couch and the eager crowd mere inches from their faces. The anticipation in the air was palpable. All of the drinking and chattering was all just preamble to what we were really here for: to listen to some goddamn rock n’ roll. And, as they immediately kicked off with the high-octane “Ld50”, they delivered.

As the floor shook and sent vibrations through my body, I looked down at myself: the Cramps t-shirt two sizes too big, the jeans with holes at the inner thighs, the boots painted with Hieronymous Bosch’s Garden of Earthly Delights. It occurred to me that I was just one in a sea of weirdos. Maybe it was that realization, or maybe it was just the alcohol clouding my brain, but all my worries melted away, leaving nothing but the music.

Which, at long last, leads me back to that visceral moment.

I felt the floorboards buckle before I heard them. For a moment, my stomach dropped and I was weightless as the house shuddered. Then, a terrible groan cut through the blasting distortion. Then came the screaming. What followed was a total blur. By some miracle, there was a massive divot in the floor, but no hole to speak of, and no one was hurt. Even still, I remember the lights flickering on, and all of us swarming out like so many roaches. As I rode the wave of people out onto the street, all I could hear was ringing and the sound of my own blood rushing with adrenaline. Needless to say, the night was over.

I came back to my senses about halfway through my walk home. I realized I was shivering from the late fall air hitting my sweat-soaked skin, yet I couldn’t actually feel the cold. I laughed despite myself. And kept laughing. I’m just in shock, I thought. Yeah, that must be it. No normal person would think of a floor almost collapsing under them as a good time. Yet there I was, cackling to myself like a lunatic in the middle of the street on a Sunday night.

Something clicked into place for me that night. There was a whole scene of eclectic people who desperately wanted camaraderie and catharsis just as much as I did — enough to shake a house to its foundation. For the first time in years, I felt well and truly alive. I felt like I was home. 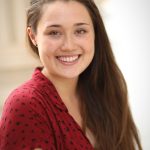 Sian Lee Syring (She/They) is a vocalist, director, and voice actor based in Richmond, Virginia. She graduated in 2020 from VCU with a Bachelor of Arts in Theatre and a minor in creative writing. Her other interests include Dungeons and Dragons, Japanese noise rock, and a bitchin’ pair of boots.