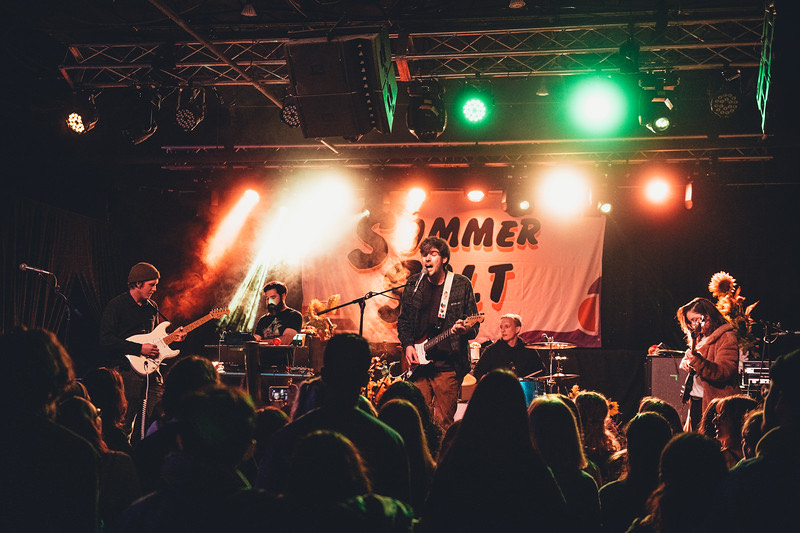 Virginia Beach’s Berries have used the quarantine to put together some new tunes, but what they really look forward to is playing shows again.

Berries is a five-piece band out of Virginia Beach that evolved from the high school recording project of singer and guitarist Chris Ledbury. They just put out a new album called Soliloquy Road, and miss being able to play shows. However, they’ve been able to keep themselves somewhat occupied during their quarantine.

By Ledbury’s side are brothers Daniel and Jacob Gardner on guitar and drums, respectively. His own older brother Johnny plays keyboards and percussion, and on bass is Jessica Denniston, the self-proclaimed “best member” of the band.

Ledbury said that his writing process starts with a lot of loops. He uses a loop pedal to record guitar parts, then adds in lead guitar, bass, or synths. He also makes drum beats that he then loops to play instruments over. Once he’s made some demos, he’ll listen to them and write lyrics to a melody he forms in his head.

“I like to start with the music before anything else,” said Ledbury.

This is the process he followed for their recent album, Soliloquy Road. Ledbury said the album was made by him in his house as a solo effort, with a few contributing lead guitar parts from Daniel. The songs on Soliloquy Road came from much more time spent creating demos and playing around with tracks than on the first album, Sea Dance, Ledbury explained. He also enlisted the help of his friend Aaron Denny for recording drum tracks, saying that Denny’s home studio is much better set up for drums. Denny is the novelty sixth member of Berries, sometimes jumping in as the “rogue trumpet player,” according to Denniston.

Denniston might have the most musical training out of any of the band’s members, being classically trained on cello, viola, and upright bass, but each member adds their own essential talent into the sound of Berries. Ledbury first began playing music at a friends’ house, always wanting to play his friend’s drum set. Later, he picked up his sister’s old acoustic guitar.

Meanwhile, for Daniel, his introduction to guitar came at a point when he had a lot of time on his hands.

“I started playing Guitar Hero at Chris’ house in middle school,” he said. “I was like, ‘Damn, I really want to start playing guitar.’ Then my mom found my weed and grounded me, and I finally had time to learn.”

The Berries family has been taking advantage of their downtime during the COVID-19 quarantine. Ledbury says they’ve been spending a lot of time at his house, which he calls perfect for the situation. Not only is there a pool in the back that his dogs happily run around and jump into — even in the middle of interviews — there’s also a lake with a dock. They say they’ve been doing a lot of fishing out there.

“Jessica and Daniel fish a lot,” said Ledbury. “I’m starting to get into it now, too. It’s extremely relaxing.”

“It’s so chill; all you do is sit there and drink beer,” said Denniston. Berries confirm that their go-to fishing beer is Miller Lite.

Denniston said they’ve also all been playing a lot of video games, specifically the new Nintendo Animal Crossing. When they aren’t hanging out at Ledbury’s, they’re often hanging out on each other’s islands in the game.

“You can see how long you’ve been on Animal Crossing from the home screen,” said Denniston. “For me it says ‘150 hours or more,’ and I’m so embarrassed by that.”

In addition to fishing and video games, Ledbury has also been taking time to work on another Berries EP. He said it is made up of about seven songs that didn’t make it onto Soliloquy Road, and the band hopes to release it sometime in the fall.

Ledbury said he takes influence from The Elephant 6 recording collective bands; groups like Neutral Milk Hotel, The Olivia Tremor Control, and Apples in Stereo. He’s also a big fan of Radiohead and the work of Thom Yorke. “He gets so offended when people say they don’t like Radiohead,” said Denniston.

Animal Collective is also a big influence for Ledbury; Berries did a cover of their song “Man of Oil” that just might be better than the original.

Like many bands during this time of quarantine, Berries greatly miss playing shows. Over Memorial Day weekend, they had planned a show to celebrate the CD release of Soliloquy Road, but it had to be canceled because of the coronavirus.

“We’re hoping it gets rescheduled and it turns from release show to release party,” says Denniston.

Berries know their CD release show will happen… eventually, and that they will play shows again. They’re hopeful that this happens in the near future, but they also recognize the need for caution.

“A lot of people are eager to turn the ‘gig machine’ back on,” said Denniston, “but you’ve got to take time.”

For now, they’ve made loose plans for some shows later in the summer, all at outdoor locations, like Norfolk’s Smartmouth.