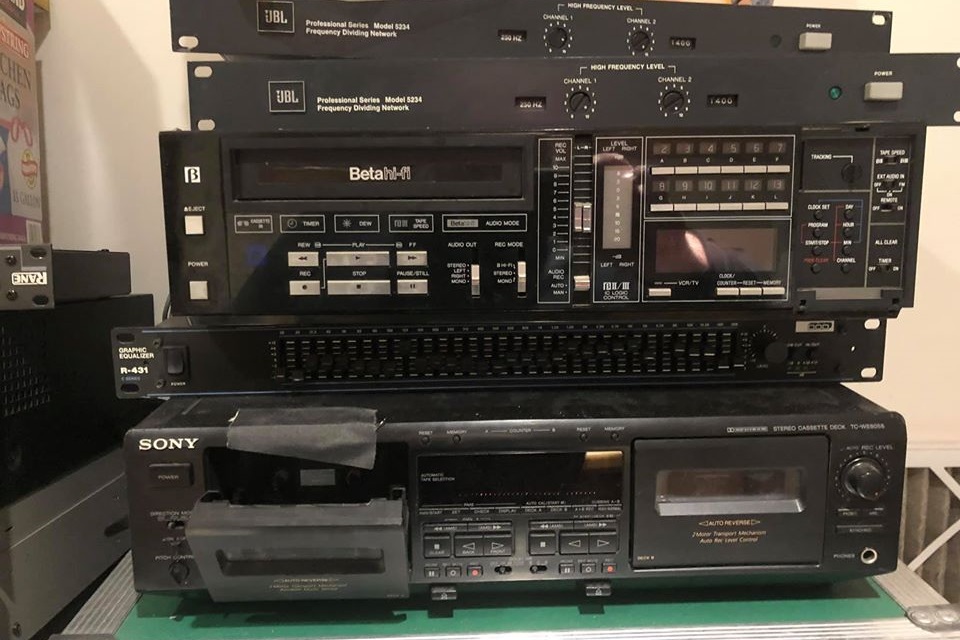 Bill McElroy has been operating Slipped Disc Audio in Ashland for over a decade, but his love affair with the sound of music goes back a lot farther than that.

For Grammy-winning soundsmith Bill McElroy, the art of sound engineering came naturally to him from a young age. “It’s almost always been audio,” McElroy recounts with a faint smile. “In the beginning I was always interested in sound.” That interest still dominates his life many years later, and he has made it his life’s work for a quarter century as the owner of Slipped Disc Mastering and Recording Studio in Ashland.

McElroy’s journey began in high school as a simple fan of high fidelity sound. He met a fellow hi-fi enthusiast, Bob Dawson, in his gym class, and the two quickly became friends.

“I always thought that some of this stuff sounded better if you turned it up loud,” McElroy chuckled. “Okay – I liked loud music.” Both McElroy and Dawson agreed on this point – music sounded better loud. They figured that if loud is good, why not combine their two systems and play them side by side to get an even louder sound? They got together later that week and blasted their music together. “It sounded a little better, we thought at the time,” McElroy says now.

He had never really thought about the quality of sound until the song “Sidewalk Surfin’” by Jan and Dean came out. He wasn’t initially impressed — that is, until he decided to play it on his hi-fi system at home. Hi-fi systems were designed to be exactly that – a system that reproduces sound as faithfully as possible to the original recording, allowing for home enthusiasts to enjoy an almost live sound.

What impressed McElroy the most about that Jan & Dean track was the sound of the skateboard. He was fascinated by the way the skateboard’s sound would jump from one speaker to the other – a feature of the then-new and exciting stereo sound. His older brother, a monaural enthusiast, boldly stated that “he would rather hear a good monaural sound than a cheap stereo.” While this comment offended the young McElroy, who had just fallen in love with stereo, it did bring him to “really pay more attention to the quality of sound.”

As the high school duo became more interested in the actual quality of sound, they continued to fine tune and upgrade their personal hi-fi systems accordingly, constantly discussing which sounds they thought sounded better. As they paid more attention to detail, they quickly concluded that some of their favorite records weren’t recorded very well. Determined to improve the quality of records, they set out to “record things better.” At least that was the initial goal.

“Some of our initial tries were terrible,” McElroy said, letting out a hearty laugh.  “You know, for some reason or another we’d run into a problem, and it just wouldn’t sound good.” Not easily disheartened, the pair decided to begin their recording journey by following their favorite local band, who were from Takoma Park, Maryland, and recording their shows.

Takoma Park was right next door to their hometown of Bethesda, so bringing their equipment to each concert wasn’t that big of an issue. The real issue came with the quality of their recordings. Bill put it quite frankly, “We made some really terrible tapes, by any kind of standard, even then,” said McElroy.  “We kept trying to improve that.” They decided to improve their recordings by slowly upgrading their sound equipment — buying a microphone here, another piece of equipment there. Eventually, said McElroy, “We got to the point where people actually paid us to record them.”

Their recording studio had very humble beginnings, originally located in Dawson’s basement. Recording could only happen during certain hours of the day, and the banging of the drums was a constant cause for Mrs. Dawson’s yelling. When McElroy was drafted to fight in the Vietnam War, their business venture came to a halt for a few years. When he returned home, McElroy decided to move out of his parents’ house and rent a house of his own. This new house became the base of operations for their recording studio. The house was so small, McElroy recalls that when bands would come in, they would need to use both the living and dining room to fit everyone.

While Dawson’s mom was no longer disturbed by the constant clamoring of drums, the same couldn’t be said for McElroy’s new neighbors. One day, McElroy’s roommate called from a neighbor’s house, saying, “The bass is so loud that it’s rattling the windows in THIS house – I just know that I won’t be able to take it if I come home.” Eventually McElroy found a solution, subletting a small area on the second floor of a government and public service advertising building.

This small studio in a “nondescript red brick building in Falls Church, Virginia” was only about 20 minutes from his home in Bethesda, if traffic wasn’t bad. However, this space too would prove problematic for their business; the advertising agency directly below them also had a problem with the drums.

“We didn’t do a very good job [soundproofing] and they could hear [the drums] pretty well down there,” McElroy laughed “Drums have always been an issue – and the sound of drums is always an issue with audio engineers.” McElroy, like many audio engineers, wants to capture every nuance of the sound a drum set makes, which can require ten to twelve microphones and a fair amount of fine tuning to get the sound just right.

For McElroy, this attention to detail is what makes for a successful soundsmith. “It helps to be a discerning listener and to care about what you’re hearing,” he says. “The ultimate thing that you’re trying to get in a recording is capturing the music in such a way that everybody is going to be able to enjoy it.”

While McElroy recognizes that some people are going to have differences in preference over vocal and instrumental balances, he strives to make his music accessible to the average listener through the design of Slipped Disc’s current location. In his design of the facility, McElroy made sure to avoid parallel walls. He also strategically placed stones and other materials around the walls and ceiling to help control the sound.

His goal is to keep the room relatively “live,” with the sonic profile of a standard bedroom or living room, so that it will sound good to the people listening to his work at home. The strategically placed material along the walls combine beautifully with the varnished wooden walls and doors to create a warm and welcoming atmosphere upon entry into the studio.

Slipped Disc wasn’t always located where it is today, though; it actually started in Richmond, Virginia in 1995. McElroy originally moved to the Richmond area after a divorce, in order to be closer to his son and to do his best to be a “full time dad 50 percent of the time.”

Upon arriving in Richmond, he was surprised to find that nobody in the area was doing mastering. Seeing the success that mastering businesses were having in the D.C. area at the time, McElroy decided to set himself up as the first mastering suite in Richmond.

“I got some good business out of that, because some people who were doing rap and hip hop wanted to have bad words taken out [of their songs] so they can get radio play,” he said. “Because of the mastering and editing system, I could do that.”

Eventually, due to high demand and popularity, McElroy decided to expand and add a recording studio to the mastering suite – but first he needed to find a space for this expansion.

He found what he was looking for one evening when driving on back roads with his son. Following a set of railroad tracks, they stumbled across the town of Ashland, just 18 miles north of Richmond. Seeing that the railroad tracks pass through the middle of Ashland, McElroy, who had previously worked with Amtrak in Richmond, recalls thinking, “This is it. This has got to be the place.”

Initially living out of a Super 8 motel until he could find more permanent housing, McElroy kept his eyes peeled for a property that he could use for his business expansion. Eventually he settled on a property connected to the Ashland Theatre, just off of England Street, and one of Ashland’s main attractions.

McElroy says that work days at Slipped Disc can vary based on the type of clients that come in. He hopes that one day, when he’s ready to sell it, the space will continue to be a recording studio. For now, he plans to keep recording, but he does have some concerns for the future. “I am getting older,” he says. “I am concerned that at some point I won’t be able to hear what I could hear when I was younger. So far, that hasn’t happened. I’ve been lucky.”

However, McElroy’s current intern, Aidan Allen, has full confidence in McElroy’s continued hearing ability. “I’ve watched Mr. McElroy get a little twitch in his eyes when he hears something out of place,” says Allen. “When working beside him, he perceives the smallest sounds that I can’t even pick up on. It is incredible watching him alter sound, and the finished product comes out sounding one hundred times better.”

McElroy’s final word of advice for those aspiring to enter the sound industry is this: “I think the most important thing is to trust what you’re listening to. So even if you don’t have the best speakers or the best system, learn it well, so that you know — ‘on this system that I’m working on, it always seems to make guitars sound too thick.’ Know that if I make it sound better on my system, it won’t sound good anywhere else. You have to learn your system, learn the sound of your system, and know the sound of the space that you’re working in.”

McElroy’s story is one of inspiration for those who want to go into the music industry. Slipped Disc stands as a true testament to how far one can go with enough determination to make their childhood dreams come true.

BJ Camano is a current junior (Class of 2021) at Randolph-Macon College. He is currently a triple major in Asian Studies, Music, and English with a minor in Japanese Studies. He enjoys both writing and singing in his free time.

Bass Around The World: An Interview with Chip Hale

Chip Hale is a producer, musician, and the owner of 6807 Studios. He plays bass in Richmond's Moosetrap, but what really made us want to... READ MORE

Bass Around The World: An Interview with Chip Hale

Chip Hale is a producer, musician, and the owner of 6807 Studios. He plays bass in Richmond's Moosetrap, but what really made us want to... READ MORE