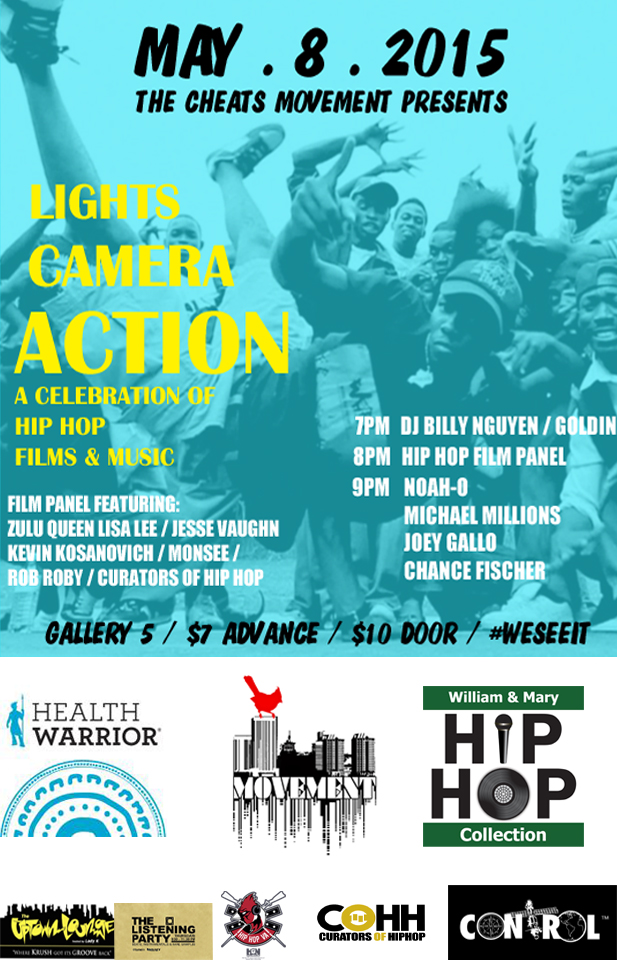 It’s not hard to go out and see a hip-hop show in Richmond these days. There’s a growing amount of talented hip-hop artists playing frequently at venues around the city, but there needs to be a little something more than just promoting and going to shows to really start a movement.

Marc Cheatham and his venture with the Cheats Movement is working to bring hip-culture and the Richmond community together. It started in 2011 and has taken off in the last two years. The website highlights all things art, culture, community and of course the Richmond Hip-Hop scene. The movement’s motto? ‘The Intersection of Hip-Hop Culture & Community’

In 2013, they had about four big events promoting Richmond Hip-Hop and connecting with the community. Last year, Cheatham and his wife had a baby boy, so no live events were able to occur.

But the first ‘Cheats Movement’ event of 2015 is going to take place this Friday May 8th at Gallery 5. Called Lights, Camera, Action: A Celebration of Hip-Hop Films & Music, the event hopes to bring together hip hop music and film in RVA like never before.

The event will begin with a discussion on Hip-Hop film with six panelists talking about the impact of it has had on culture. Among the panelists are Zulu Queen Lisa Lee and Emmy Award Winning director Jesse Vaughn who directed Juwanna Man.

There will be no full screenings, but there will be four to five projectors showing clips of movies being discussed by the panelists. Some of the films include ‘Boyz n the Hood’ (1991), Juice (1992), and Menace II Society (1993).

The film discussion will start at 8pm.

The group Curators of Hip Hop, one of the film panelists for the event, made a film following the journey of several different Hip-Hop artists over the course of a few years. One of the artists in the film is Hip-Hop artist Logic was just signed to a major record label.

The trailer for the film will be shown on Friday night.

After the film panel there will be four live performances by local Hip-Hop artists Noah-O, Michael Millions, Joey Gallo and Chance Fisher.

“These guys have really been consistent on the hip hop scene within the last year,” said Cheatham. “They’ve been staples on the site http://thecheatsmovement.com/ , great friends of the site and we wanted to give them an opportunity to really showcase their talent.”

During the performances, the projectors will show different Hip-Hop films projecting on the wall behind the performers.

Doors for the event will open at 7pm, beginning with a special performance by local artists Goldin recently performed at SXSW along with DJ Billy Nyugen.

The event is about celebrating all spectrums of Hip-Hop: music, film, culture and community.

There will be several ‘Cheats Movement’ events this year based on different elements of Hip-Hop. This event focuses on film the next one may focus on something like break dancing.

The ‘Cheats Movement’ is really helping to make Hip-Hop in Richmond not just a branch of music but a cultural force in the community.

“I feel like people supporting the culture really want to see a wider spectrum,” said Cheatham. “They want to see something a little bit different. [At this event] they can see a great show and get a different element of hip hop rather than just going to a concert.”

This will be both a learning experience and a celebration of the culture, and Cheatham is hoping for a diverse crowd of people from all walks of life. Local Hip-Hop videographers will be there showcasing some of their work as well.

“We’re trying to bring as many elements of hip hop into one night as possible,” said Cheatham.

Doors open at 7pm. Admission is $7 in advance and $10 at the door. You can pick up tickets early here.