The No Plan, No Worries Way To Do SXSW - RVA Mag 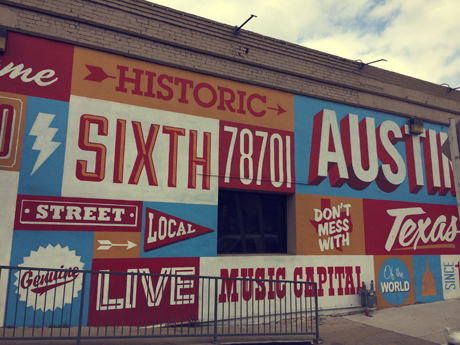 South By Southwest, otherwise known as SXSW, is a music festival that’s been taking place in Austin, TX for nearly 20 years. It happened this year between March 7 and March 16, and I had the good fortune to be there for the last few days of the festival.

South By Southwest, otherwise known as SXSW, is a music festival that’s been taking place in Austin, TX for nearly 20 years. It happened this year between March 7 and March 16, and I had the good fortune to be there for the last few days of the festival. I have become obsessive about taking photos and notes on my trips. It’s out of necessity, since I can’t remember the stuff that happens around me for very long. That’s a good thing, because the trip down to SXSW was such a blur that I am glad to have all these images to remind me what I was going to write about.

I went down to follow a few Richmond bands playing the fest this year, but I had a hard time getting around due to the log jam of people, so I ended up seeing only a few in action. I want to apologize to our friends in Dumb Waiter, People’s Blues of Richmond, and Long Jawns for missing out on what I am sure were awesome parties. Next year, fellas, we try it again? Raincheck please. What I did see was killer and worth the trip.

I flew in from visiting family in San Francisco with no real place to stay, lugging around my bags and hoping for the best. I lined up my press passes for SXSW, my flight in and out of Austin, and a few shows–that’s it. Let’s go!

Immediately off the plane, I ate a few BBQ tacos and caught the shuttle to see our Richmond buds in J. Roddy Walston and The Business. You might have heard them on the radio on 102.1 The X–they have been on constant rotation across the country. The band was one of the featured acts at The Heartbreaker’s Banquet, an invite only showcase on Willie Nelson’s ranch outside Austin. The place was the set of the movie The Redheaded Stranger back in the 80s, and looked real and fake at the same time. Fully equipped with a fake church and old-time saloon, it was a strange unreal spot to see all these great acts.

Roddy and Logan from the band took me into the backstage area, and over the next few hours met some great people. The team behind The Wild Honey Pie out of Brooklyn, Ryan from Squarespace, The Lagunitas Brew guys, Live Nation reps, and so many performers that I couldn’t keep track of them all. Sipping on Midnight Moon Moonshine all night didn’t help matters much. What a great sponsor to have for this thing!

One of the early great surprises of the night was running into Dave Stewart and Will Carsola of DayByDay at the gate. I haven’t seen them in years. That was totally random, but these Richmond guys are now in LA about to release their new show, Mr. Pickles. It might be the most disturbing show to hit Adult Swim ever. Be on the lookout for it in October–and keep an eye out for our story about it next week.

Anyway, hanging with them and tagging along with Roddy was a good time. Here they are taking photos for the press.

So I managed to catch J Roddy and The Business, and the set was great. High energy blues rock with a tinge of the gospel. It really opened up a night filled with Americana and Blues, right at sunset in Texas. It was unreal. If you are not familiar, here is their latest video.

They were followed by the husband and wife alt-country duo from South Carolina Shovels And Rope, who recently filmed a video with J. Roddy, and were so good. This lady sings like Dolly Parton. Then some shenanigans happened – someone in the crew acquired a case of that moonshine, and I forgot where I was until Willie Nelson came on. He and his band played a set that had everyone getting misty. Willie Nelson is a living legend and hasn’t lost a bit of showmanship.

Next thing I knew, it was over and I was on the Roddy tour van back into Austin around 1 AM. Thank god for Dave and Will lettng me crash at their rented spot.

The next day Mike Rizzo, the DayByDay manager, took me into the city to check out the conference. If you read this, Mike, thanks for the talk and the hospitality! We caught a showing of Andre Hyland’s short film, Funnel. Hyland is another talented person that Rizzo is managing. Andre is this awkwardly funny comedian working in LA with Bob Odenkirk of Mr. Show fame. The film was good. If you have some time, check it out.

After that we got a delicious lunch at some spot I couldn’t pronounce, much less spell. Then I hit the Flatstock 43 Gig Poster Show. My post on that event is HERE.

Then it was on to catch Tony Foresta of Municipal Waste playing the Converse Thrasher showcase at Scoot Inn with his new band, Iron Reagan. Its good to see metal still has a home in Texas. The crowd reminded me of one of my favorite spots in Richmond, Empire. As expected, Iron Reagan killed it and got everyone into a frenzy. After the gig, I caught up with Tony, but he was swarmed and it was short. I guess I will see that fool next time he is hanging in RVA. Great set guys.

I saw a bunch of Richmond folks here and got invited to some mansion party and a little hot tub action, but decided I better not lose Dave and Will, since they had all my stuff. So after getting food with them at THE Austin vegan spot, Mr. Natural, we decide to head back for a spell before the showing of their film that night, Pumpkin and Bubby.

Unfortunately, the SXSW people cut the program short, and they didn’t play the film that night. As you can imagine, that got the guys pretty pissed. I did get to see a real gem at the showing, though. It’s called Chocolate Heart and the director, Harrison Atkins, was super nice when I met him afterwards. His card actually says “Filmmaker & Total Sweetheart” on it.

With everyone in the group a little miffed, the only thing that was gonna help this was whiskey. We decided to get a drink on 6th Street. To say it was stupid packed is an understatement. There were so many people on the street that getting a drink or hanging was gonna be a hassle.

Luckily, J. Roddy was nearby, and he had a plan. We jumped in his friend’s truck and got a local guide to take us bar-hopping.

We hit up a bar I can’t remember the name of for a round of homemade fireballs, and then went to a legit honky-tonk bar called the White Horse. This place was rowdy, with people rocking cowboy hats and singing honky tonk jams.

I wasn’t there 20 minutes before getting into a conversation about how local Austinites hate SXSW and the foreigners it brings. Dude was ready to fight me but after a few minutes wanted to buy me a drink. He even gave me a bear hug and asked me to hang with his crew. Good thing it was time to go. We piled back into the truck and headed out.

Now at this point, I knew I had to be at the airport by 6am. My cab was coming by the house at 4:30am. Looking at my watch, I saw it was around 1am already, but our guide was taking us to a real-deal speakeasy. I wasn’t gonna miss that for anything, and I am glad I stuck it out. The place looked abandoned but after getting past the door lady, we were treated to a small bar that looked straight out of a movie. The hippest illegal joint in Austin. We need one here in Richmond. If there is already one, hit me up and let me know. I can keep a secret.

I had a great time right up until the moment it was time to get in my cab. With no sleep whatsoever, I showed up at the airport in a daze, wondering if all of this actually happened. That flight sucked–but it was worth it. Until next year, thank you Austin and SXSW! That was ridiculous.