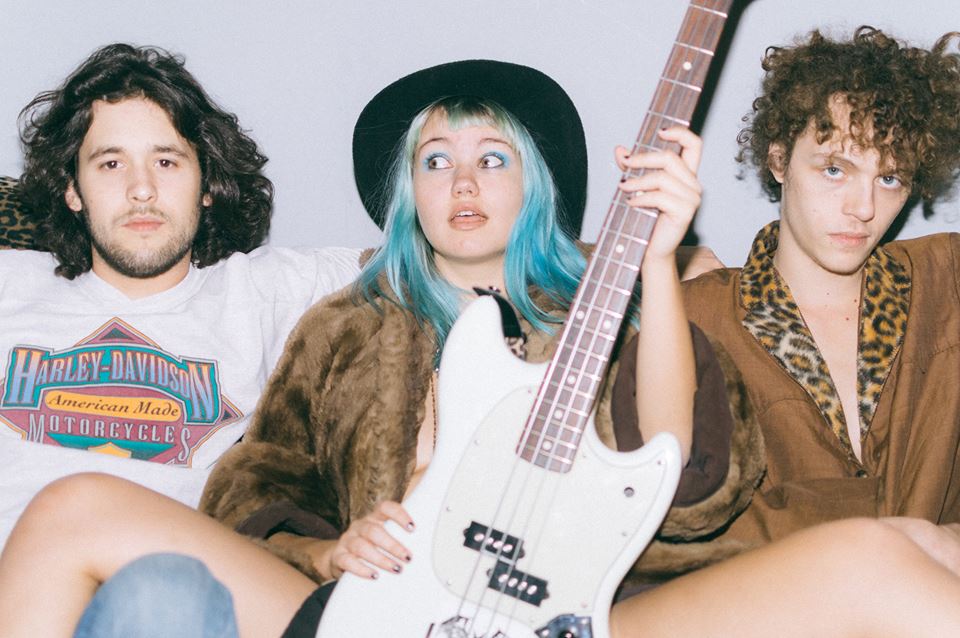 The youthful garage-punk trio from Richmond love to get naked, get crazy, and play loud, fast rock n’ roll. Not necessarily in that order.

Garage-punk trio Toward Space has been creating a brainsick space for the homeless and the strange in Richmond since their tween-age days And after nearly a decade together, this is still only the beginning of the madness.

Vocalist and bassist Seyla Hossaini and guitarist and vocalist David Pahtoon met at their local pool when they were 10 years old, and became fast friends. Since then they’ve been inseparable, playing music together and digging into the cult movie and horror scene.

“Ever since we first met each other, we’ve been trying to make something happen,” said Pahtoon. “It didn’t get serious, though, until a couple years ago.”

Pahtoon and Hossaini had been in a couple of bands together, but they had never gotten anywhere — mainly because of the other members involved. “So, we decided why don’t we just do a two piece and just focus on each other,” said Pahtoon.

The early two-piece was inspired by minimalist garage-punk bands like King Khan & BBQ Show. “I would play a bass drum and snare with two kick pedals and play guitar and sing, and Seyla would stand next to me and play bass and sing,” said Pahtoon. “That worked for a while. And then we got a drummer, like, a real drummer.”

After working for a while with another drummer that Pahtoon charitably says “wasn’t the best,” they found their current drummer, Ben Rosenstock. “That was when we started being really serious about it,” said Pahtoon, “when we really became old enough to know what that means.”

The members of Toward Space have their own idea on what it means to be a true friend and bandmate, which may come as a surprise to those unfamiliar. By way of telling the story of his joining the band, Rosenstock sheds some light on the situation.

“It was Pride festival day, 2017,” Rosenstock began. “I was at a party at a friends house after the festival. David was wearing a lovely dress, and he stopped me in the hallway and just goes, ‘Hey man, do you want to join Toward Space?’ I was like, ‘Yeah, of course,’ and he goes, ‘Stand right there.’”

Rosenstock was confused, and a little concerned. “I couldn’t figure out what he was about to do,” the drummer said. “Like, punch me in the face or something? Or kick me? I didn’t know if it was a hazing thing. Then he just flashed me his penis.”

It’s Toward Space’s belief that nudity is the best way to show that you care. It’s even made surprise appearances at shows — take this story Pahtoon tells about a show by local rockers Brain Drain that the band members all attended.

“While they were playing Seyla jumps up on-stage completely naked,” said Pahtoon. “It was one of my first times talking to Ben ever, and we were just trying to scream-talk to each other over the band playing, right next to the mosh pit. Suddenly Seyla’s completely naked and lands on top of us. I go, ‘that’s our bassist!’ and our drummer at the time walked up and starts pouring a full beer on her head, and I go, ‘that’s our drummer!’”

“Ben has seen David and I naked so many times, and we’ve never seen him fully naked. It’s just utter disrespect,” said Hossaini mockingly. “He’s a Toward Space virgin.”

The band cites their penchant for nudity as one of their claims to fame, scorning other bands who’ve done similar things in the past, like the Red Hot Chili Peppers and their notorious socks.

“The Red Hot Chili Peppers were pussies,” said Hossaini. “We show it all.”

“They have socks on their dicks, we have full on frontal nudity,” added Pahtoon.

Now in their early 20s, Toward Space has been a full-time touring band for a while now. But no matter where they go, the weirdness follows them.

“It really just seems like when we play places around the country there’s always two homeless people there, and they’re like, ‘you guys are awesome!’” said Pahtoon. “It’s like we’re the voice of the homeless people or something.”

Touring has had its ups and downs for the band. They’ve played shows with well-known garage bands like Shonen Knife and NoBunny, and played other shows to almost no one. Even the empty shows tend to produce good stories — like Pahtoon’s tale of their first time in San Francisco.

“Our show was a bust, ’cause no one came out,” he said. “[Afterward,] I had one foot on the pavement, one foot on the car, and this high school kid ran up to me and was like, ‘hey man, wanna buy some shrooms?’” By now, you won’t be surprised to hear that Pahtoon answered in the affirmative. Once the band got to the house where they were staying that night, he proceeded to indulge. That’s when things got really weird.

“We were staying in this house with people we’d never really met before,” Pahtoon relates, “and some random dude comes up to me and goes, ‘Hey man, I don’t know how squeamish you are, but check this out.’ Holds his phone up to me, and it’s a picture of him getting brain surgery.”

The long hours on the road have had both good and bad effects. Sometimes they have brought the band closer; at other times, the hours in a cramped van have driven them to the point of combustion.

“We had a couple shows on tour where we just got to the point that we were beating each other up on stage,” said Hossaini. “It’s not even pissed, it’s just pent-up energy. When you’re in the car on tour, or at least when we are, it’s a lot of shame.”

“It’s like on Spongebob where he’s just like, ‘eh, gettin kinda bored,’” Pahtoon said. “And then he catches the Krusty Krab on fire.”

Along with the heat of boredom, the trio’s obsession with cult films and murder have brought them to a place of creative insanity. They’ve never shied away from onstage theatrics, dabbling in playful makeup and gender-bending attire. But they hope to go further in the future.

“There’s more theatrics coming,” promises Pahtoon. “We’ve always tried to do the whole makeup and dress thing, but there’s gonna be more fake blood. We’re gonna have a plastic bag full of feathers, and I’ll time it right to go, ‘1, 2, 3, 4…’ and throw the feathers.”

“It’ll be like the homicide scene in John Waters’ Pink Flamingos, where they cover Connie and Raymond Marble in feathers and shoot them,” Hossaini chimed in.

The group’s love of cult movies came through on their 2018 album Gently With A Chainsaw, the title of which the title is a reference to the 80s cult film Heathers. They hope to follow it with an album that will feature even more movie references and horror themes, and they’ll be taking their time on this one to make it just right.

“All of our other records have been rushed, with a deadline in mind for going on a tour and stuff like that,” said Pahtoon. “I’m happy with the other stuff we’ve put out before, but it was rushed, and now there’s not really a deadline. We are going to try to really do the best we can with it, not just do The Clash first record kind of thing — hurry up and put it out.”

While it may be a while before any new releases are ready, Toward Space are continuing to play out around Richmond, and have shows coming up on Saturday, April 20 and Thursday, April 25, both at Wonderland in Shockoe Bottom. You’re not going to want to miss the wild times and loud rock n’ roll that Toward Space has in store.