Wandering Through Virginia With the Way Down Wanderers - RVA Mag 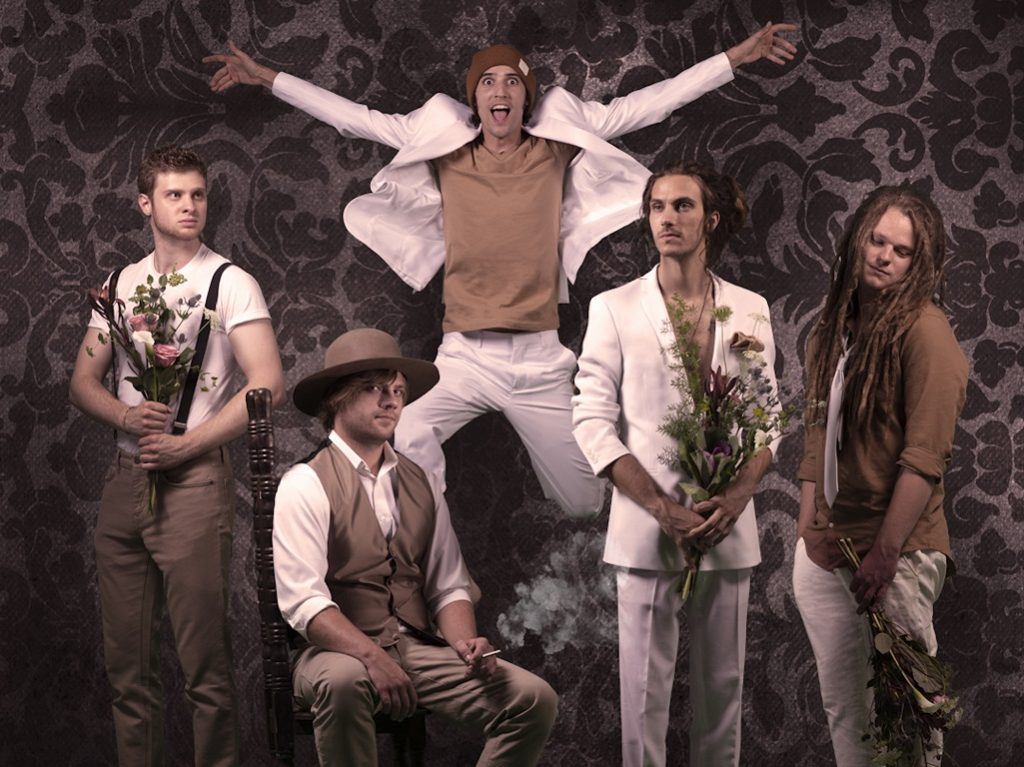 Ahead of folk/Americana quintet The Way Down Wanderers’ three shows across Virginia next week, Graham Stone caught up with the band’s principal songwriters to talk illusions, inspirations, and good times.

Austin Krause-Thompson and Collin Krause of central Illinois group The Way Down Wanderers have been playing music together since their teen years. Fresh off their performance at Americanafest 2019, I got to talk to the two of them together about their band, a few of their songwriting influences, and the upcoming tour that will bring them back to Virginia for several shows.

I’m talking to y’all right after your Americanafest show yesterday, right? How was that?

Collin: Yeah, it was amazing! Playing in Nashville is always a blast. We had a great show with a great crowd, and just to be surrounded by so many great musicians — it really was an incredible time.

For folks that might not have heard of y’all yet, I wanted to see if you could help give a little bit of background on the band itself. When did The Way Down Wanderers form, and how did this journey begin?

Austin: Well, I guess officially it was back in 2013. Myself and Collin had been in a few different bands together by that point. We’ve always loved folk and bluegrass music. We wanted to keep in that vein but branch into more musically diverse song-based sounds, and be able to include things like drums, electric guitar, and keys, for example. We started writing songs together in our teen years. Once we found some mutual friends who had like-minded ideas, we all came together to form this band, and we’re about six years in at this point!

It’s cool to hear y’all talk about the influences that folk and bluegrass music have had on your sound. As the band’s primary songwriters, I’m interested to know who y’all would list as some of your favorite songwriters, or biggest musical influences.

Collin: Well for me, I got really into songwriting around the same time I first heard the Avett Brothers. I was about 14 years old. I heard Seth and Scott and was super inspired by their ability to say really profound things in a totally new way. I also really love the Tallest Man on Earth and Bob Dylan. As far as bluegrass sounds, though, I grew up listening to a lot of Nickel Creek, and going to their concerts every time they came through my town. I love Chris Thile and the Punch Brothers too! And we actually got to go on tour with the Infamous Stringdusters last year, which was amazing. I think we all really look up to them as probably one of our current favorite bluegrass bands.

Austin: When it comes to songwriting specifically, my first and biggest influence was probably Paul McCartney. To me, he is someone who not only paved the way for rock and roll but really for song-based music. I’d probably have to say John Lennon, Bob Dylan, and also the Tallest Man on Earth for me as well.

Tell me a little bit about the upcoming tour that brings y’all back to Virginia.

Collin: Sure! We’ve played in Virginia a bunch and always loved it. We’ve had great shows in Charlottesville and Richmond before, but we’ve never played the Tin Pan, and Jammin’ Java will be a new room for us as well, so that’s exciting for us.

Austin: Yeah, we’ve always had great shows in Virginia in the past, and have played a couple festivals there too: Red Wing Roots and Devil’s Backbone Hoopla, which were a ton of fun. This tour is set up to be more of a solo headlining tour, so there might be support on a few dates here and there. But that’s exciting for us, because it means we will be playing longer sets. Although, we also really love meeting local bands, new talent, and making new friends.

When it comes to your live show, what aspect of the performance are you most excited about?

Collin: It’s a feeling that’s really hard to describe, but when we get on stage and we are in front of an audience that is enjoying what we’re doing, it’s just so joyful for us. It makes it really easy for us to have fun on stage. Anytime we get to play a good venue for a nice crowd, we get really excited about it.

Austin: Yeah. We’ve also heard that the Tin Pan is a really nice listening room, so we’re definitely excited for that. We have a bunch of lively tunes, and a pretty dynamic set overall, but there are also some pretty tender moments that I think will be perfect for a room like that.

You released your latest album, illusions, earlier this year. What’s next on the horizon for the Way Down Wanderers?

Austin: Well, Collin and I have been writing some new music, which is cool. We’re slowly getting some of that together. But we also host our own music festival in southern Illinois called The Wander Down Music Festival. This is our third year doing it. We’ve got a great lineup including the Stringdusters, Old Salt Union, Chicago Farmer, and a bunch more really great artists. There is also camping and lots of workshops, and it’s a very family friendly event. This year we’re also planning to do a live recording of our set and release that as a live album — so keep an eye out for that too!

The Way Down Wanderers will be playing three different shows across Virginia in the coming days. They’ll be at Charlottesville’s The Southern Cafe on Tuesday, September 24, then at Jammin’ Java in Vienna on Wednesday, September 25, before coming to Richmond’s Tin Pan on Thursday, September 26.

Top Photo by Keith Cotton, via Way Down Wanderers/Facebook