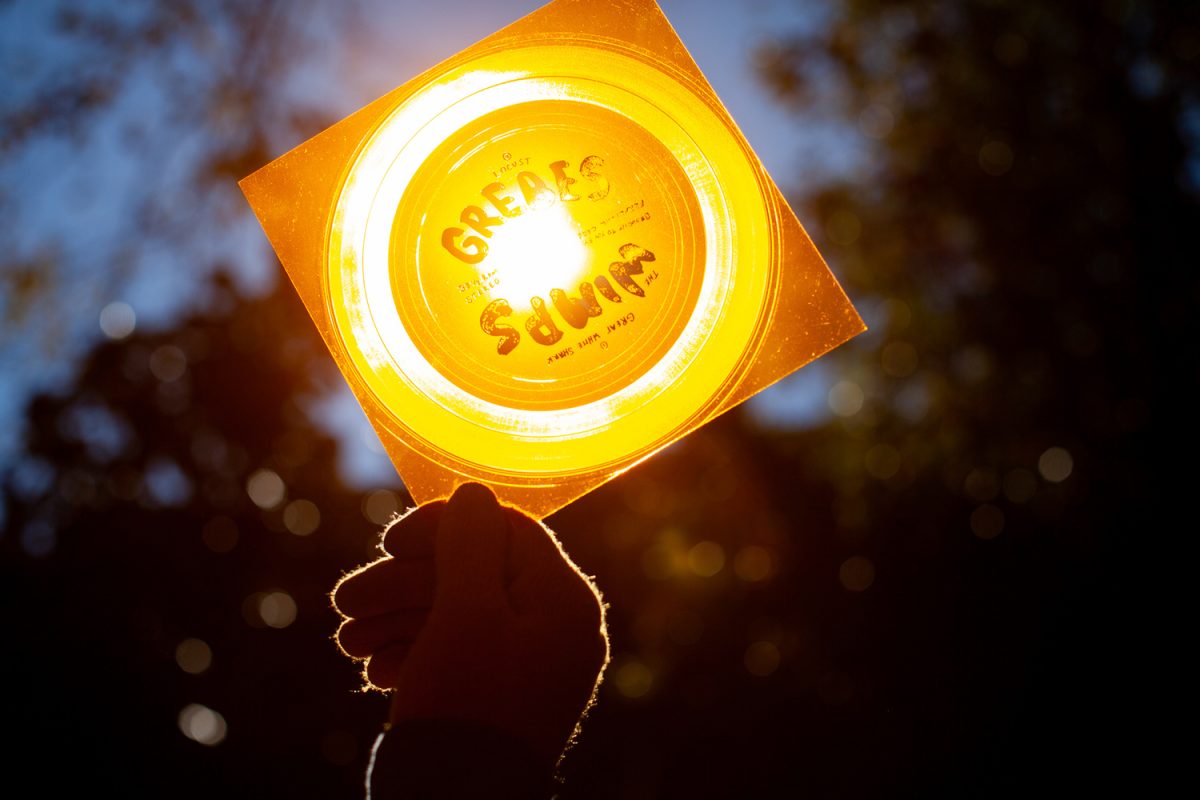 The brand new flexi-disc from Richmonders The Wimps and Grebes comes to us as the first release from Perpetual Care, a locally-focused “interdisciplinary studio,” and revives an unusual format with an intriguing history and aesthetic.

It’s always nice to see local people trying something new, especially when that leads to their work existing beyond the digital space in which we’ve all been confined for way too much of the past two years, while out in the real world — you know, IRL — a deadly pandemic raged.

The split EP from Richmond bands The Wimps and Grebes, which was released about a month ago, is definitely a great example of something new on the Richmond scene — though, in reality, it gets to a place the scene has not previously gone by returning to a very old technology that was relatively common in the DIY world around a quarter-century ago. The technology I refer to is the flexi-disc, a record made not with solid slabs of vinyl but merely a thin, floppy vinyl sheet — one that often needs to be stabilized by having something relatively heavy, like a coin, set onto its inner label while it plays.

Back in the 90s, when alternative rock and its many subsets were enjoying a moment of popularity in tandem with underground “zine culture,” a lot of independent record labels and independent magazines joined forces to promote their music while adding value to their zines by giving away flexis inside zines — something they were particularly well suited for. I still have close to a dozen from 20-plus years ago, including promo singles by Elastica and Shonen Knife, and a flexi that was given away in the Beastie Boys’ Grand Royal magazine featuring Biz Markie covering Elton John’s “Bennie And The Jets.”

Flexis have experienced a bit of a revival in recent times, and this one, which features two songs adding up to exactly six minutes on one side with a blank backing, is the first one I’ve seen from a local Richmond endeavor. And I guess you could say it’s somewhat of a novelty, but I for one think it’s pretty goddamn cool. And I’m not just saying that out of nostalgia, either.

This split flexi is the first release by Perpetual Care, which co-founder Darrin Higgins calls “a Richmond, VA project-based interdisciplinary studio with an emphasis on music and culture.” Higgins and co-founder Brent McCormick, who are both designers in their day jobs, founded Perpetual Care in order “to partner with, partake in, and promote the community caring for them.” Their hearts are certainly in the right place, then, and the music on this record is coming from a pretty great place as well.

The Wimps are first up on this “soundsheet,” and they’re probably the better known of these two local groups. A four-piece group that prominently features organ on its contribution, “Great White Shark,” the Wimps offer a lot of appeal to underground music fans around the city. They aren’t a punk band by any means, but their driving, no-frills power-pop is close enough to the more melodic end of that genre to have crossover appeal for the punks, while still easily connecting with the more melody-focused indie kids around the scene.

Grebes are a newer project from around town, or at least they haven’t caught my attention before now. The project of songwriter, producer, and multi-instrumentalist Jacob Ungerleider, Grebes has a delicate indie mood on their track, “Locust.” Ungerleider may not be all that familiar a name to me, but he’s got a pretty formidable resume, with previous stints touring with the Fruit Bats, Natalie Prass, Angelica Garcia, and others. Chances are if you’re impressed by those names and the music they’re responsible for, you’re going to find a lot to like in the Grebes tune gracing the inner portion of this flexi-disc’s playable surface.

Perpetual Care have clearly just begun with their Richmond-focused artistic and cultural efforts, but this is a strong opening salvo from a project that isn’t afraid to think outside the box. I definitely will be keeping an eye out for what else they bring to the city in the future — hopefully good things are coming soon. For now, if you want to get a copy of The Wimps/Grebes split flexi for your very own (and why wouldn’t you?), you can get a copy for $6 plus $2 shipping from Perpetual Care’s website. Christmas is coming; get one for the Richmond indie music fan in your life this holiday (even if that does mean you’re just buying it for yourself).