There was a slight tremble in his hand as he jotted down what could have seemingly been the answers to some hidden temple, his hand recarving the numbers and lines into the napkin. Once content, his gaze jerked back to focus, sending the sweat-leaded pen out of his hand, spiraling into the air – the fourth time in the interview. This man is Mike Barber, proud owner of Carytown Burgers and Fries, though his proud demeanor is overtaken by stress, his shoulders tight as he fidgets in his seat.  “Hey, thanks, guys,” he said as he waved goodbye to his customers.

Carytown Burger and Fries is set to close on June 30, following the recent annexation of properties in the Richmond Shopping Center. This also includes their 3500 W. Cary St. lot, a location they’ve called home since 1999. The Buyer: Publix Super Markets, which bought the lease on the shuttered Martin’s Carytown store, along with 10 others in Richmond, aiming to seize a market still wide open, with Kroger, Ellwood Thompson’s, and Fresh Market a block or two away.

“We were only given a three-month notice, and we were told the lease was going to end January 30, so we went into scramble mode and had a moment where you freeze up and don’t know what to do,” said operations manager Jordan Leonard, “We got another extension for five more months, to June 30, and maybe month-to-month after that, although they were unclear.”

Though according to Barber, Carytown Burger and Fries isn’t going down without a fight.  “I wish they would have given us sooner notice… we’re not trying to cause a ruckus, we’re just trying to do the right thing,” he said.

Last Tuesday, Carytown Burger and Fries launched their own petition on Change.org in an effort to rally the community to help save what’s become a Richmond institution.  “I feel like it’s our responsibility to let the public know and have them make a decision on saving a historical landmark,” Barber said. “The support’s been great, we’ve had over 7,000 signatures in under 48 hours, which is pretty incredible. We just want to keep that awareness and response going. The more people know about it, the better chance we have.” 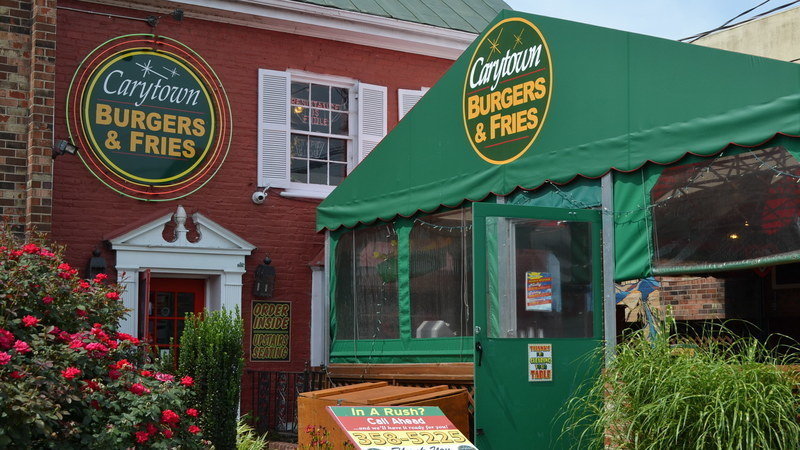 “He said we have about a 20-25 percent chance of saving the building, just depends on what kind of reaction we get from the public,” said Barber.

While technically the city councilman for Carytown is Andreas Addison, Agelasto has been helpful in negotiating between Carytown locals and out-of-town developers.

“While I am pulling for Carytown Burger and Fries, there is not much pull I have in this,” said Agelasto “I have no right over this and I don’t wish to set a precedent of a city official being involved in an individual lease agreement.”

Agelasto did instead offer a variety of options that could benefit all parties involved, expressing to the developers the necessity in “preserving Carytown” and “encouragement to fit in the support of the original tollhouse into the development”, even urging developers to consider resigning the current tenants that would surround the future Publix grocery market. Agelasto also offered the option of relocating the building, as well as considering future laws to preserve Carytown with “limits on formulaic businesses in Carytown”, depending on the individual and economic factors of the shopping centers, though he stressed no formal opinion on the subject.

When asked their plans on finding a new location, their enthusiasm turned to forlorn.  “For a restaurant, it’s very hard to move. We got 10 times the regulations other businesses do; It’s not retail, it’s months of meeting codes and regulations, even the right parking lot.” Barber said.

Leonard added that they do not have a build-out plan for them or any place for them to go.

“They said if they did in the future, it would probably be three to five years out, which isn’t really feasible for us right now.”

The leasing office renting out the lot, W.C. Hutchinson, issued notes to the door of Carytown Burger and Fries along with several other small shops in the neighboring areas, with the sole options to go month-to-month or leave, filing a chopping block along the lots.

Rachel Douglas, executive director of the Chrysalis Institute, was among those pushed out and has since moved to Roseneath Road. “They were great when we began, very responsive with us,” she said. “Towards the end of last summer around August, and with little answers as to why they made it clear they were not wanting to resign.”

When asked for comment, a manager at Carytown Teas shared the same sentiment: “Well, we’re definitely sad, we’ve been {here} since 2015,” they said. “We heard it was Publix buying up the lot, but there’s been no straight answers. We were barely given a couple months notice. They gave us the extension with the option to do month-to-month afterward.”

As we reached out to more of the shops still open, the responses began to correlate the same attitude: A loss of community, and a loss of culture.  At the helm of the development is a sort of joint operation between multiple parties: the owners of the Carytown Shopping Center, W.C. Hutchinson who manages the lease, and Florida-based Regency Centers Development, who is currently in charge of working with Publix in developing the building.

According to Kim Reynolds, Publix representative for media relations, they are “still working through with the center’s landlord what those plans for our store look like” and denied further comment, though specified they have only acquired the lease for the Martin’s Carytown location, which was announced in 2016. Reynolds also declined to comment on why they chose that specific location to plant their forthcoming grocery store.

According to a Richmond Times-Dispatch article, Regency, Centers Development representative Chris Widmayer, expressed his cooperation with the parties involved, despite hazy communication. “We appreciate Carytown Burgers and Fries being a tenant for the past 20 years and wish them the best going forward,” he said in the interview.

Widmayer also stated in a Channel 6 article that records didn’t show it as a “registered historic building.” While we did reach out to Widmayer and others at Regency and W.C. Hutchinson, we were met with sparse remarks and a total lack of elaboration.

Carytown is a neighborhood that has corporatized in waves over the years, with the last wave back in 2010, when a vacant Verizon call center replaced with a Fresh Market, Petco, Chipotle and Panera Bread. The response brought a large communal pushback, under the movement “Don’t Big Box Carytown.”

“I know that a lot of people are upset– the long-term Richmond-based businesses get pushed out by stuff like this,” Barber said, pointing at the window. “there is the whole lot over there that got pushed out about five to eight years ago with the Fresh market, the Panera; and the public was in upheaval, no one wanted it to happen.”

Gentrification happens not in theatrical climaxes with drawn-out greedy corporate animates on bulldozers. This happens behind the scenes, with many left in the dark, until a note is posted on the door. While some renovations undoubtedly bring promising recovery to many areas of business, gentrification comes at the cost of the surrounding culture and often undermines the unique qualities of the community. One would think the character and history of Carytown, a champion of local business since its inception in 1938, would stand the test of time. Maybe this assumption doesn’t hold true, maybe one Short Pump is simply not enough.

Though the future looks boxy for Carytown as the essence that permeated the lively streets slowly begins to fade, at least there’s one less city toll.

There will be a town hall meeting in the beginning of March to deal with public feedback on the developments as well as shed some light on the dates and reasoning of the parties involved. The meeting will take place at Albert Hill Middle School.