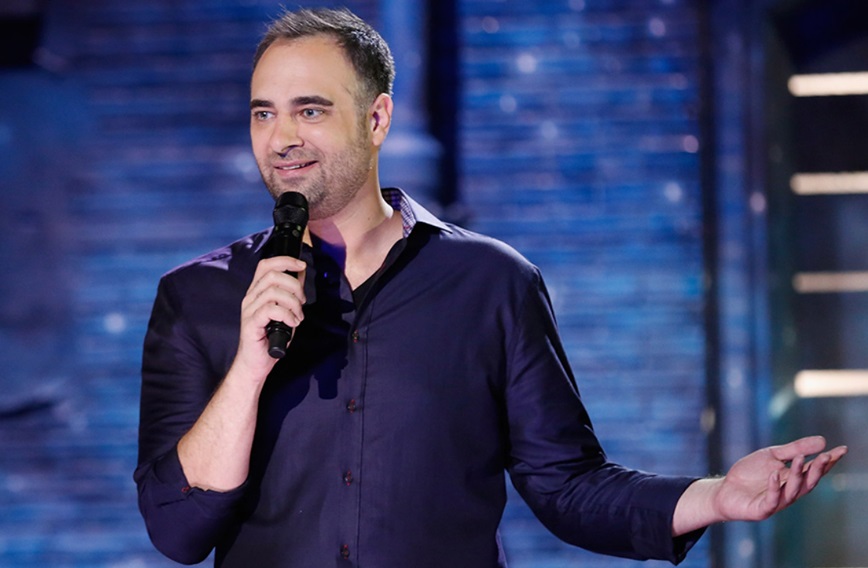 Hello reader! This interview marks one year for me covering comedy in Richmond, and one year that Sandman Comedy Club has been open. I’ve gotten to talk to some of my favorite comedians and gotten to know some new ones. While it’s been fun chatting with the touring comics coming through Sandman (couldn’t have done this without you), it has also been a great experience getting to know the local Richmond scene. It feels like I’ve only scratched the surface of what Richmond comics has to offer. Watching comedy grow locally and across the nation has been eye-opening and I plan to keep at it for another year. I want to thank all who have been supportive of this journey and who keep reading.

This week I got to speak with Kurt Metzger. He wears many hats in show business, not only as a standup comedian, but also as an actor, voiceover talent, writer, and producer — the latter of which have won him Emmy and Peabody Awards. He’s contributed to such projects as: Chappelle’s Show, Sacha Baron Cohen’s Who Is America?, Comedy Central’s Ugly Americans, and Cartoon Network’s Aqua Teen Hunger Force. Metzger tells me what comedians who enjoyed growing up, his views on modern comedy media, and his experience working on Horace and Pete. Here’s our conversation:

Gabe: What comedians were you into right before you got into comedy?

Kurt: Mmmm. Do you mean as an adult, just before I got in? Or do you mean —

Gabe: Even when you were a kid.

Kurt: As a kid, my favorite was Amazing Johnathan. And when I was older, I remember Norm MacDonald was a big favorite of mine. But I kind of knew him from SNL, more than standup.

Kurt: When he first went on there, I remember being like, ‘This guy’s hilarious.’ I’m trying to think who else. It’s hard to remember who I watched before I did it.

Gabe: You’ve probably seen the game change a lot over the course of your career.

Kurt: Yeah. I mean I don’t think [it] changes. It’s like, certain things expand and contract.

Kurt: You know, like nowadays is… like if you’re like [Dave] Chappelle. You’ve got deals with guys with Netflix, and like, do whatever you want. Everything else is… I was talking to a friend last night about this: anything with a network. The idea of you’re going to be Seinfeld or, I don’t know, Martin Lawrence. That whole kind of thing, that’s totally different now.

Gabe: Yeah, I remember getting a sitcom used to be the goal, or whatever.

Kurt: Yeah. I never gave a shit about that. I really liked standup, but I mean, that kind of was the main thing of, ‘oh, this is how you do it,’ or ‘this is how you make it a thing.’ That’s what it was. I think when I came in, it was the tail end of like wanting to be Johnny Carson.

Kurt: And I never gave a shit about talk shows like that. Something I would watch when I didn’t have cable. And now I don’t even have cable. It makes sense. Like NBC for example: you know, they haven’t had a hit for, like, a long time. I think Parks and Rec was their final time making comedies really. All these companies make PR [Public Relations] now, instead of comedies. It’s true. So, they’ll go, ‘Well, comedy doesn’t do well,’ but they will make them. Parks and Rec, which I remember as being the last thing that was like The Office. Parks and Rec, that was 2016. So, after Trump got in office and they were like, ‘I can’t in good conscience show a Ron Swanson anymore.’ [laughs]

Kurt: Imagine you’re one of these people that wrote on that, and then after Trump got in office, they’re all traumatized, and all that shit. ‘I don’t think it’s funny, Ron Swanson!’ I’m not even really a fan of Parks and Rec but that was in the time when they were still trying to be funny. But now it’s just PR. You can’t make a comedy and have it be PR. It’s not PR. It’s not advertising. It’s not. It’s got to be funny. You know?

Kurt: Yeah, it’s funny. I never watched YouTube when I wrote for cable a lot. And I was like, ‘Well, I worked for real TV.’ When YouTube came out, I didn’t give a shit about it. I’d see posters when they started. You know that guy, Tyler Oakley? I remember seeing his poster, like he was one of the emerging [stars] — and I didn’t understand anything. I didn’t watch that shit. I was like, ‘oh, what is this?’ And now I pretty much only watch it. It’s amazing how much that changed. I really would rather watch somebody’s shit that they made themselves now. My attention span is shorter because of that ten minute [format] — like, that’s their perfect sweet-spot length. It’s around ten minutes for stuff — my attention span to watching shit. I don’t know if that’s good or bad, but I’d almost rather watch someone talking about it who already watched it than me watch a show, generally. Like, a narrative-driven show. You know?

Kurt: That’s the crazy thing. I mean, that’s old now. TikTok is probably the future. It’s like: say it in thirty seconds! You know? I’m probably too old to get on that train.

Gabe: I wanted to ask you about what your experience was like working on Horace and Pete. I’m a fan of the show. And Steve Buscemi and Alan Alda were on it!

Kurt: That was the best, man. That’s the probably the best environment of a thing I ever worked on. Because everybody’s really cool. I didn’t really know any of those people. Those were, like, big name actors I was with. And it was… if you imagine meeting someone you were fan of, and they were as cool as you imagined. Which is like: that’s not how that works. But, Steve Buscemi — fucking guy was awesome. He used to be a standup. He used to play at The [Comedy] Cellar. He showed me an old poster from when The Cellar opened.

Kurt: That’s how Steve Buscemi started. As a standup.