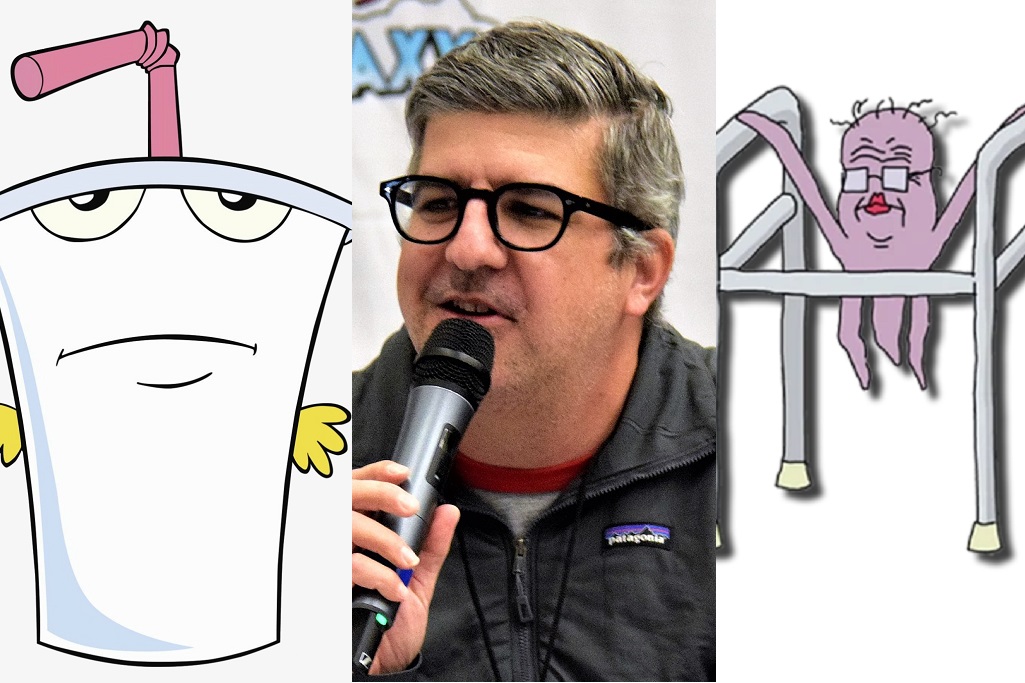 As soon as I say the name — Master Shake — his voice is already running through your head.

From Adult Swim’s Aqua Teen Hunger Force and Squidbillies to Bob’s Burgers and The Patrick Star Show, and even his own podcast with comedian Guy Hutchinson, actor Dana Snyder’s voice is pretty iconic and difficult to miss. This weekend you will have one more place to listen to his dulcet tones – GalaxyCon makes its grand return to The Greater Richmond Convention Center.

While now arguably his most well known role, Aqua Teen is also how he originally came into voice acting. Like many other actors, Snyder began his career with stage work in New York while working another job. This is what he was doing when a college friend recommended him for the role to series creators Dave Willis and Matt Maiellaro.

“They said, ‘We’re trying to find a voice for this character, and everyone in Atlanta is like radio announcers. We’re not finding what we want’,” said Snyder. “[They said], ‘He’s like a jerk, bossy, he should sound like his voice writes a check his mouth can’t cash.’ She said, ‘Oh, you should call my friend Dana.’”

The series has since become a cult hit, and was the longest-running Adult Swim series at the time of its cancellation (that honor now goes to Robot Chicken). Fans of the series now have something new to rejoice in — the Aqua Teens are making their grand return this year in the form of a film on HBO Max, along with ten to twelve shorts. The film itself will be released in the summer, along with two other Adult Swim films for Metalocalypse and Venture Brothers. The shorts don’t have a specific release date yet, but are coming sometime this year.

“The movie picks up right now, and fills you in on everything. They are not together, for reasons I will not divulge,” said Snyder. “They do the classic ‘We’ve got to get the band back together.’”

Snyder has done stage and screen, but there’s one thing that keeps him coming back to the world of voice acting. As he explains, “Voice acting is the greatest job in the world. I really don’t like doing stuff on camera. It’s a pain in the butt.”

Of all the acting gigs to have, in hindsight he picked a pretty good one to have during the COVID-19 pandemic. While many on camera actors scrambled to find voiceover work, Snyder and other voice actors were staying pretty busy. He started work on a new series, The Ghost and Molly McGee, when lockdown originally happened, and worked on three others during that time — Jellystone!, The Patrick Star Show, and Aquaman: King of Atlantis.

For the most part, even during lockdown it was business as usual. Like many other actors and performers, everything was done remotely, and at the moment still is. Generally, production companies send them the equipment needed to record their lines as if they were in the studio, but from the comfort of their homes.

“During COVID, for a while we were the only ones working,” said Snyder. “When lockdown happened, I had started a new show, The Ghost and Molly McGee, where I play the ghost. It’s fantastic. Disney sent a big box of equipment, and I hooked it up and we’ve been doing everything remotely now. The only thing I’ve gone into the studio to do, I’ve been in to record the Aqua Teen movie, I went in in New York to record a Squidbillies episode, and I went in to record a Christmas special. As long as I have internet, it doesn’t matter where I am. It’s great.”

While working remotely was a new thing for many industries at the time of the pandemic, it was less of an adjustment for voice actors than it was for a lot of people. When you think about it, the remote method isn’t that much different than how voice actors record normally, as most don’t need to be in the room together. Indeed, sometimes it’s better if they are not.

“I feel like in general it’s better when everyone is together, because you’re reacting off of each other,” said Snyder. However, he acknowledges, it’s always a bit of a tradeoff. “Let’s say you have a great take, you did that line perfectly and that’s the one they want to use, but I talk over you or mess it up somehow. It’s just one extra factor of having to have a better recording. [If] we do something and they love what you did but not what I did, it’s triple the work, because we’re in a room together. But from an acting standpoint, it’s great, because you might get something incredible from us being in the room together and playing off of each other.”

Snyder is very grateful for his position in the world and what he does for a living, but it certainly doesn’t stop him from wanting to be in everything he can. Much like anyone else he has his own professional bucket list, and at the top? The Simpsons — without question.

“Who doesn’t want to be on The Simpsons?” said Snyder. “It’s a cultural touchstone. Every time I see Justin Roiland, he tells me what a great voice I have, and we’ve known each other awhile, so I go ‘You know, you are making the most popular show on Cartoon Network right now. You could put me on Rick and Morty.’ So yes, The Simpsons and Rick and Morty. I realize my place in the world, and I am very grateful for what I do, but that doesn’t stop me from wanting to be in everything.”

When he isn’t voicing your new favorite character, Snyder can also be heard along with Hutchinson on their Drunk on Disney podcast, where they talk about cocktails, Disney, and its theme parks. This year they will once again be doing a live recording of their podcast at GalaxyCon, but this year will bring a first in the form of a live afterparty on Saturday night.

What is the gift, you ask? You’ll just have to attend the party to find out. This writer and RVA Magazine have been sworn to secrecy, but we can tell you this: it’s pretty badass.

Tickets are $125 each, and attendees will have food, a signature cocktail, drink tickets, a piece of drinkware, a very special take-home gift, and just be able to hang out and have a good time. One thing Snyder has certainly noticed since conventions started coming back is just how excited folks are just to be out and back. Conventions, in their own way, evoke a very specific sense of community, and to be able to see friends old and new after two years is important.

“It certainly feels different, but so much of it doesn’t, so much of it feels the same,” said Snyder. “In another way too, I think it’s been better the last couple conventions I’ve been to. Because people have been away for so long that it’s a more positive experience, and they’re just happy to be back. I’m very excited about it.”

GalaxyCon Richmond will take place at The Greater Richmond Convention Center from Friday March 18th through Sunday March 20th, 2022. Tickets are on sale for the convention, and more information can be found at GalaxyCon’s website. Dana Snyder’s Drunk on Disney Party will be Saturday, March 19th at 9:30p, and tickets for that event can be found here.